Worried about bills? Find out how to apply for pension credit and an extra £650 cost-of-living payment below

Older people struggling to pay their bills are being urged to ensure they don’t miss a crucial deadline to qualify for an extra £650 cost-of-living payment from the Government.

The first £326 is being paid out now, but the elderly still have until Thursday 18 August to get it by applying for pension credit.

This tops up the income of the poorest pensioners and automatically entitles them to the lump sum, plus many other discounts and perks.

Signing up will also trigger the second £324 half of the payment this autumn.

This includes the £650 payment for those on means-tested benefits, including pension credit, and an extra £300 for eight million pensioner households to help them cover rising energy costs this winter.

Charity Age UK says elderly people worried about bills should check if they are eligible for pension credit and apply ahead of next month’s deadline so they don’t miss out on the first half of the £650.

Pension credit tops up weekly income to a minimum of £182.60 for single people and £278.70 for couples, and you can gain thousands of pounds on top via help with housing, heating, council tax, TV licences and other bills.

To get the full £650, you need to have qualified for pension credit – or later be found to have been entitled – between 26 April and 25 May.

But successful pension credit applications can be backdated for three months so 18 August is the final cut-off date to start a claim.

The criteria for eligibility are here, but having savings, a pension or owning a home are not necessarily barriers to receiving pension credit, and you don’t need to be receiving a state pension to get it either.

Finance industry campaigners recently launched a drive to seek out the worst off pensioners in the country to urge them to sign up for pension credit.

Under the slogan ‘Pension credit – it’s for you!’, they aim to use the private sector’s vast data resources to identify and come to the aid of elderly people with limited savings and income.

Find out more here about pension credit, or call Age UK which will help you apply,

The Government also recently launched a new advertising campaign tackling myths that might deter people from applying on an official ‘day of action’.

It is appealing to the family and friends of pensioners to help them sign up, as an estimated 850,000 eligible households miss out on £1.7bn a year.

MPs on the work and pensions committee have called on the Government to work with local authorities and others to come up with a strategy for boosting pension credit take-up by the end of this year.

They say this should cover a take-up target, a timeline, confirmation of funding, a plan to identify households likely to be eligible, support for them to claim, ways to simplify or automate claims, and an annual update on progress.

Minister for Pensions Guy Opperman says: ‘We recognise the challenges some pensioners will be facing with the cost of living which is why promoting pension credit is a priority.

‘During the week of our recent pension credit day of action we saw a 275 per cent increase in claims – but we’re not stopping there.

‘We’re continuing to get the word out about pension credit, calling on everyone with retired family, friends and loved ones to check in with them and see if they can get this extra financial support, which can make a huge difference to people’s lives.’

Caroline Abrahams, charity director at Age UK, says: ‘It’s not too late – there is still a window of opportunity for older people on low incomes to qualify for the first part of the government’s £650 cost-of-living payment this year, so we urge people to claim without delay, so they don’t miss out.

‘Pension credit not only gives a significant boost to people’s weekly income; it also opens the door to a wealth of extra support including help with energy bills, a free TV licence and discounts off household bills.

‘We know that around three quarters of a million pensioners are missing out on this important benefit right now.

‘Many people often think if you have some savings, or a small pension there’s no point applying but that’s often not the case.

‘The sooner people act, the sooner they will find out if they are eligible for some of the additional financial help, and this could be life-changing for them.’ 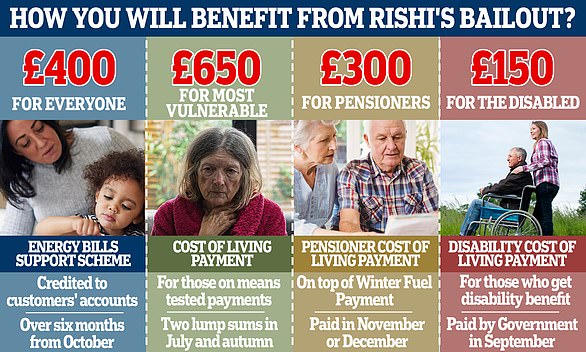 What else do you get if you qualify for pension credit?

– A cold weather payment of £25, paid automatically when the average temperature is 0°C or below over seven consecutive days

– Help with council tax and rent

– An extra amount of pension credit for some carers worth up to £37.70 a week

What elderly people say about struggling to pay rising bills

Age UK recounts what older people say about their experiences trying to get by, and the help the charity offers them.

Gayle is in her mid-70s, lives alone, and carried out a benefits check with her local Age UK.

She says: ‘Age UK’s help was life-changing and meant I didn’t have to worry about bills for the first time in my life.

‘That little bit of extra money has made difference to what I can do on a day-to-day basis.

‘My energy bills are safe until after the new year, but when you see prices going up and up and up, it makes you worry about what might happen when my deal runs out. How can pensioners afford these increases when the state pension doesn’t cover half of it?’

Linda, a widow also in her mid-70s, was supported by a local Age UK with hot meal deliveries and help finding an emergency plumber during the pandemic.

Age UK says: She is a widow and lives with chronic COPD and osteoporosis, which affects her mobility.

‘Linda received a full benefits check which resulted in a near doubling of her weekly income. She was also able to apply for a grant towards her energy bills over the winter and received a £150 award.’

‘The cost-of-living support measures announced earlier in the year offer vital financial support worth up to £1,200 to the nation’s most vulnerable and £550 to the vast majority of the population – but they are already out of date.

‘Ofgem has admitted that the energy price cap is likely to rise by more than its original estimate of £800, and households also have to contend with the escalating cost of food and heightened fuel prices.’

He warns: ‘Consumers cannot rely solely on the government financial support measures to stay financially afloat. The fact remains that individuals will have to do most of the heavy lifting to fortify their finances.

‘This may translate to doing an emergency budget, cutting down on non-essential spending and squirrelling away more money into a rainy-day fund if you can afford to do so.’

Jobson adds: ‘Those struggling with their finances needn’t suffer in silence. Seek help and support – talking about money issues is the first step towards a solution. Those worried about being unable to meet payment obligations should contact their providers for support.’