A 40ft-long whale has washed up on a British beach, with police advising people to keep away.

The giant marine mammal, which has died, was swept to shore at Clacton-on-Sea in Essex on Friday.

Essex Police said that it is working with other organisations on a plan for how to remove it.

The giant marine mammal, which has died, was swept to shore on Friday and is pictured by the shore

Kirsty Fordham, found the whale while she was out on a walk at 6am with husband, Mark, 47.

She called police to report the whale just after 6am. The 43-year-old said she had been left in tears by the tragic sight.

‘When I first spotted it, she was about 200-ft out and I wasn’t sure if it was the hull of a boat. I took a couple of photos and zoomed in and realised it was a whale.

Mrs Fordham, an activities co-ordinator for disabled children, said there was no sign of any wounds or bleeding, but coastguards had been unsure of the type of whale it was.

She added: ‘It was so beautiful even in death and it was a sad sight to see. I had tears in my eyes and I was really choked up. 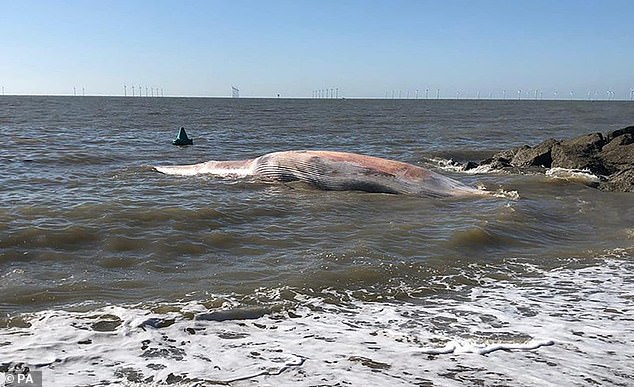 ‘The poor thing needed to be shown some respect but there were a lot of people gathering down there and it was sad really as it was becoming quite a spectacle.

‘But that’s life I guess as people are just curious. There were hundreds of people down there when we left.’

Big Blue Ocean Cleanup tweeted: ‘We are currently on site at Clacton-on-Sea where a dead whale has washed up onto the beach.’

Essex Police wrote in a Facebook post: ‘Sadly a 40ft whale has been washed up on Clacton this morning.

‘We are currently in attendance with other organisations and discussions are under way on how to remove her.

‘The area is cordoned off and the public are advised to stay away. #SocialDistancing #StayAlert.’