Madrid police arrested a former Venezuelan spymaster wanted on US narcoterrorism charges after capturing him in a hideout apartment in the Spanish city nearly two years after he disappeared.

Gen Hugo Carvajal, nicknamed El Pollo (The Chicken), evaded capture on a US warrant for drug trafficking charges with plastic surgery, wigs, a fake mustache and a new safe house every three months.

He was finally brought to justice Thursday, after a tip-off from a US Drugs Enforcement Agency (DEA) agent about his whereabouts.

The 61-year-old former Venezuelan diplomat and retired general was forced underground a second time in 2019 after Spain’s National Court ruled that he should be extradited to New York to face federal charges for working with the Revolutionary Armed Forces of Colombia (FARC) to ‘flood’ the US with cocaine.

But the two-year manhunt for Carvajal ended Thursday night when police raided a rundown apartment in a quiet Madrid neighborhood. They found the fugitive in a back room holding a sharp knife in what they described as a last desperate attempt to evade arrest. 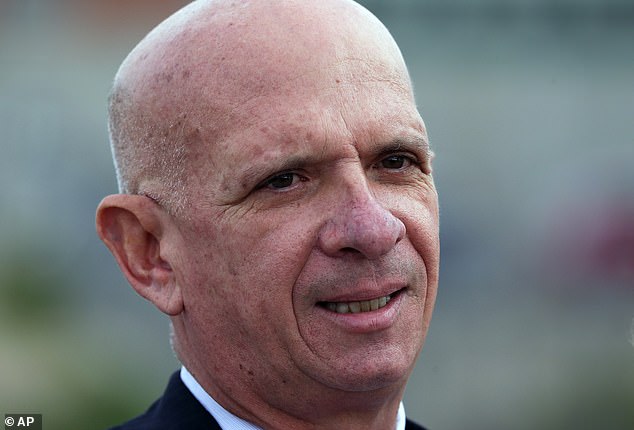 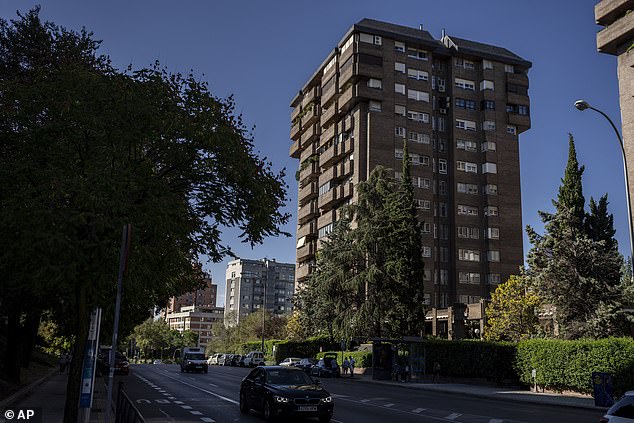 The two-year manhunt for Carvajal ended Thursday night when police raided a rundown apartment in a quiet Madrid neighborhood (pictured). They found the fugitive in a back room holding a sharp knife in what they described as a last desperate attempt to evade arrest

Carvajal has been a thorn in the side of the US Drug Enforcement Administration since 2014 when he was arrested in Aruba only to go free after President Nicolás Maduro’s government pressured the small Dutch Caribbean island to release him.

The DEA declined to comment but Spanish police said a dog was Carvajal’s constant companion in what was otherwise a very lonely, restricted life.

‘He changed hideouts every three months, using properties in which he lived cloistered, without going out into the streets, for fear he would be recognized publicly,’ police said in a statement.

Steeped in spy craft, he changed phones often and relied on others to deliver food. He breathed fresh air only at night, when he would step onto his apartment’s plant-covered balcony in disguise.

After his first arrest he returned to Caracas an anti-imperialist hero but was quickly relegated to a minor role in the ruling socialist party.

Then in 2019 he broke with Maduro amid a wave of antigovernment unrest, urging fellow members of the military to switch allegiance to Juan Guaidó, the opposition leader the US had just recognized as Venezuela’s legitimate president.

He resurfaced in Europe months later, greeted at Madrid’s airport by two Spanish intelligence officers after traveling there with a false passport, The Associated Press previously reported. From there, he had hoped to continue plotting against Maduro.

While on the run he was rumored to be in Portugal, then a hideout in the Caribbean.

Some Venezuelans at the time believed he was already on US soil spilling secrets about the Venezuelan military’s involvement in drug trafficking, or had returned to Caracas to make amends with the government he had vowed to overthrow.

Others speculated he was being protected by Spain’s leftist government, which has strayed from America′s hardline policy seeking to isolate Maduro.

The reality was much simpler: The Chicken had never left Madrid. His last hideout was a mere 1.5mile from the headquarters of the National Police. 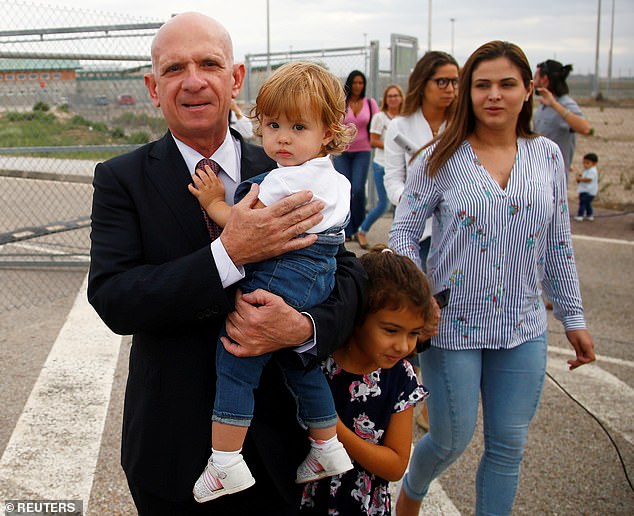 Venezuelans speculated where Carvajal (pictured with wife Angélica Flores and two of their five children) could have been hiding but the reality was much simpler: The Chicken had never left Madrid. His last hideout was a mere 1.5mile from the headquarters of the National Police 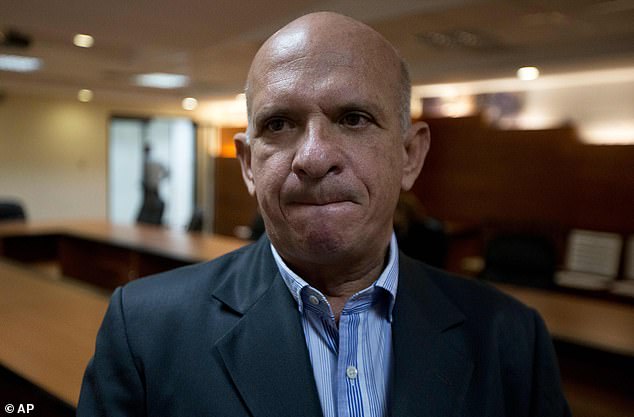 The US offered $10million for Carvajal’s arrest, repeatedly advertising the reward as bait in the hopes that someone from Carvajal’s inner circle would betray him but it’s not immediately clear if somebody snitched

‘If they actually manage to extradite him this time, it will be a spectacular way to show how justice is winning over diplomacy and intelligence operations,’ said Dick Gregorie, a federal prosecutor in Miami who indicted Carvajal on drug charges.

Gregorie compared Carvajal to another spymaster he investigated, former Panamanian strongman Gen Manuel Noriega. Both men, he said, were capable of cutting deals on all sides while scuttling the pursuit of justice.

‘He could’ve been sent here a number of times but for various reasons that are undisclosed he was allowed to go,’ said Gregorie, who is now retired.

‘But he is probably the most knowledgeable defendant with regards to all of the corruption and dirty deeds that went on in Venezuela for a decade,’ he added.

Carvajal’s capture was made possible thanks to intelligence provided by the DEA in June, according to a document published Friday by Spain’s El Mundo newspaper.

In the two-page confidential letter, Dustin Harmon, a DEA attaché in Madrid, provided police with the name and contact details for a Venezuelan woman he said owned and lived in the apartment where Carvajal was hiding.

Special forces with Spain’s National Police broke into the apartment on Thursday, where the fugitive’s presence had gone unnoticed even by those sharing the 12-story building.

The US offered $10million for Carvajal’s arrest, repeatedly advertising the reward as bait in the hopes that someone from Carvajal’s inner circle would betray him.

But it’s not immediately clear if somebody snitched. His wife Angélica Flores, who lived in Madrid with the couple’s five children and other relatives, provided little insight.

‘I’m prepared for either situation, the good or the bad,’ she told the AP when contacted by phone with the news. ‘It’s up to him and others to give statements. This case will continue and we’ll see how it ends.’

The case against Carvajal in New York centers on a DC-9 jet from Caracas that landed in southern Mexico in 2006 with 5.6 tons of cocaine packed into 128 suitcases.

He faces incriminating evidence from phone records, drug ledgers and the testimony of at least 10 witnesses, among them former members of the so-called ‘Cartel of the Suns’ comprised of corrupt Venezuelan military officers deep into the narcotics trade, according to an affidavit accompanying the indictment.

The New York indictment also repeats an accusation that Carvajal provided Colombian rebels with automatic weapons and protection inside Venezuela. 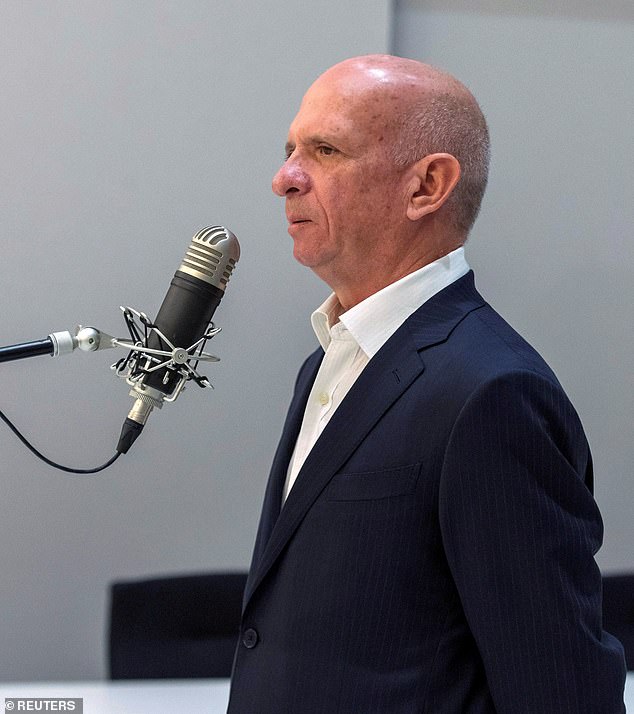 Carvajal wrote in a social media post earlier this month: ‘It’s a lie that will eventually collapse. I’ve always trusted that the truth will prevail’

‘Carvajal is the key link that can explain the business dealings between Colombian guerrillas, Mexican drug cartels and other criminal organizations in the US and Europe,’ said Martin Rodil, a Washington-based security consultant for US law enforcement who has worked on multiple Venezuelan investigations.

‘He was the hinge between all those groups,’ Rodil added but the former general scoffed at the allegations.

He said his contacts with the FARC – designated a terrorist organization by the US – were authorized by Chávez and limited to securing the release of a kidnapped Venezuelan businessman and paving the way for peace talks with the Colombian government.

He also maintains that judicial probes in Venezuela and Mexico never linked him to the cocaine-laden plane and that the aircraft’s owner backs his alibi.

The extradition order against Carvajal followed a back-and-forth legal battle in which Spain’s National Court reversed an earlier ruling by a high court magistrate throwing out the US warrant for being politically motivated.

In the interim Carvajal was released and fled when he was tipped off he would be rearrested. He wasn’t heard from again – except when he said last year that he was going underground to protest what he viewed as political interference in his case.

He resurfaced on social media earlier this month, posting what could be a preview of his eventual defense: A statement accusing former Colombian President Álvaro Uribe, who was for years America′s main caretaker in the war on drugs, of ‘fabricating’ evidence against him and the Chávez government even as it was cooperating with US prosecutors to arrest Colombian narcos hiding inside Venezuela.

‘It’s a lie that will eventually collapse,’ Carvajal wrote. ‘I’ve always trusted that the truth will prevail.’