By Jennifer Newton for MailOnline and Press Association

Day visitors to Edinburgh could find themselves paying a tourist tax to access certain streets under plans raised by a Scottish Government consultation.

In February, city councillors approved plans for the transient visitor levy (TVL) including a £2 per night room charge, an exemption for campsites, a cap of seven consecutive nights and investing an estimated £14.6 million every year.

However, a new consultation from the government, which opened on Monday, raises questions about how such a levy could be imposed on ‘day visitors to a local authority area’.

Day visitors to Edinburgh could find themselves paying a tourist tax to access certain streets under plans raised by a Scottish Government consultation. Pictured is Edinburgh’s Royal Mile

The document highlights how a levy on overnight visitors staying in accommodation would not apply to those who use local services and facilities such as roads, parks, toilets, parking and public attractions.

However, it admits: ‘Whilst there are strong arguments in favour of taxing day visitors, it is difficult to envisage how such a levy could actually be applied and collected in a practical manner and in a way that distinguished between local residents and visitors.

‘For example, could a levy on day visitors be collected at the entry points to a particular area – for example pedestrian access to certain streets or at tolls to certain roads?

‘Other alternatives suggested in the National Discussion included applying a tax to goods and services used by day visitors such as restaurants or taxis.

‘In all such circumstances, the challenge would be distinguishing day visitors from overnight visitors and local residents.’

The document states there has been ‘significant growth’ in overnight and day visitors in specific parts of Scotland, such as Edinburgh.

Almost 138 million trips were made by day visitors across Scotland in 2018, spending almost £5.5 billion, while in 2017 Edinburgh and Glasgow received around 20 million day visitors.

Other groups highlighted include ‘cruise ship visitors who disembark for a day’ and those ‘wild or rough camping, including motorhomes or caravans parked and occupied overnight in places that are not formal campsites or parking places’. 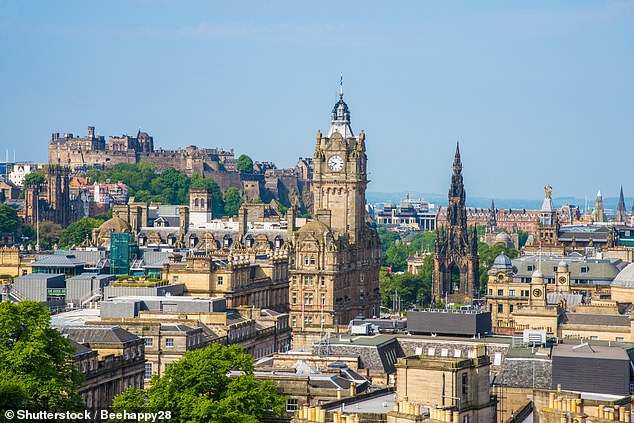 In February, city councillors in Edinburgh, pictured, approved plans for a transient visitor levy (TVL) that includes a £2 per night room charge

In a foreword to the consultation, which closes on December 2, Public Finance Minister Kate Forbes says: ‘There are some important choices to make, especially in relation to the balance between national consistency and local autonomy.

‘As we envisage the levy would be collected by accommodation providers, this consultation seeks views on how the impact on individual businesses might be minimised.

‘There are further considerations explored, including the potential to extend the levy to other visitor activities, ensuring appropriate exemptions from the levy are implemented throughout Scotland and ensuring that the tourist industry is engaged in decisions about applying the levy and how revenues can be spent to further support the tourism industry.’

Edinburgh City Council depute leader Cammy Day said: ‘The launch of this new national consultation is extremely welcome and I would urge as many people as possible to have their say.

‘Edinburgh has long been at the vanguard of the drive for the UK’s first transient visitor levy, which will help us enormously to manage the impacts of becoming an ever-more popular tourist destination.

‘We’ll continue to progress our plans to introduce a TVL so that we can be ready when the Bill passes.’