David Lloyd Leisure is to be prosecuted over alleged health and safety breaches following the death of a three-year-old boy in one of the firm’s pools.

Leeds City Council made the announcement on Monday after an inquest jury returned a conclusion of accident at a hearing in Wakefield.

The jury heard how Rocco Wright died after he was pulled from the water by his father at the David Lloyd centre in Leeds on April 21 2018.

Rocco Wright, three, died after he was found face down at the bottom of a David Lloyd swimming pool in Leeds

The hearing has been told that there was only one 17-year-old lifeguard on duty at the time of the incident.

A Leeds City Council spokesman said: ‘The death of a child in any circumstances is tragic, and we continue to offer the Wright family our sincerest sympathy.

‘Leeds City Council’s Health and Safety Inspectors have investigated the circumstances of Rocco’s death and believe that David Lloyd Leisure Ltd have committed offences under the Health and Safety at Work etc. Act 1974 which we intend to prosecute in the near future.

‘We will keep in regular contact with the family and ensure they are informed and supported throughout this next stage.’

Speaking outside Wakefield Coroner’s Court, Natalie Marrison – representing Rocco’s parents, Catharine and Steven Wright – said they continued to have concerns about safety at the swimming pool at the time and supported Leeds City Council’s investigation and planned prosecution.

Ms Marrison said: ‘At the heart of this is a three-year-old boy who has lost his life.

‘The family remain devastated by the loss.

‘The inquest has heard evidence which raises serious concerns surrounding health and safety at the swimming pool at the David Lloyd club in Leeds in April 2018.’

Ms Marrison said the ‘serious concerns’ related to the visibility available to the lifeguards in the pool and the number of lifeguards on duty.

She said: ‘The Wright family are keen for the investigation to continue and they will support Leeds City Council in any prosecution of the David Lloyd club.’

Last week, Rocco’s father told the jury his son’s death ‘could and should have been prevented’. 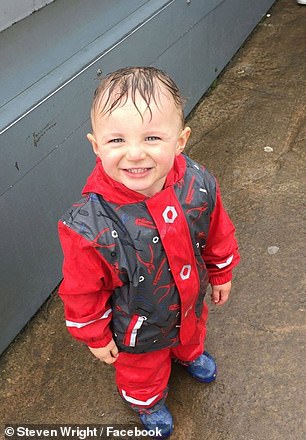 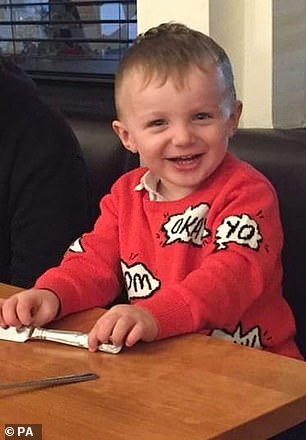 Mr Wright described how his panic grew as he searched for Rocco before he spotted him at the bottom of the main pool. The jury found that the youngster had probably been under the 1.2m (4ft) deep water for more than two minutes.

He explained how he was with Rocco and his daughter at the poolside and was planning to take his son swimming as his daughter had her regular lesson, but this class was cancelled.

He explained how he searched for his son before spotting him under the water, puling him to the side.

Mr Wright said his son had never got into the pool by himself and the inquest heard there were no witnesses or CCTV evidence that could explain how the little boy ended up in the water.

The inquest heard how David Lloyd operated a policy that the maximum number of people in a pool that could be supervised by a single lifeguard was 50 people.

David Lloyd operations director Stephen Brown stressed that this was a ‘ceiling’ figure. 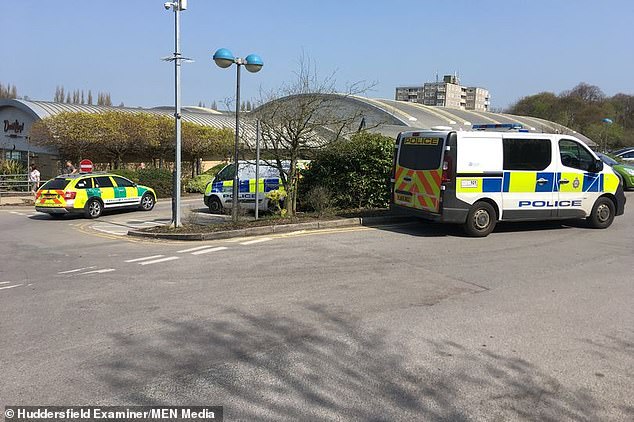 Rocco Wright, three, went swimming with his four-year-old sister and father Steven at the David Lloyd club in Moortown, Leeds, (pictured, police at the scene) on April 21 2018

Mr Brown also denied that David Lloyd had a policy of employing young life guards because they were cheaper and said life guard staffing levels were for local managers to decide.

The jury returned its conclusion after coroner Jonathan Leach told jurors that accident was the only one available to them.

In a statement after the inquest conclusion, Rocco’s heartbroken family said: ‘We are extremely shocked to hear that David Lloyd chose to appoint only one lifeguard to supervise their 25-metre pool on that Saturday morning, when it was known to them that a large number of young children would be swimming.

‘We were devastated to hear the facilities manager give testimony that lifeguard numbers had been cut at the pool due to what he stated was ”staff optimisation” in line with budget cuts, despite numerous lifeguards stating they had raised concerns about lifeguard numbers and general safety at the pool.

‘This, in our opinion, proves David Lloyd put profit before safety. 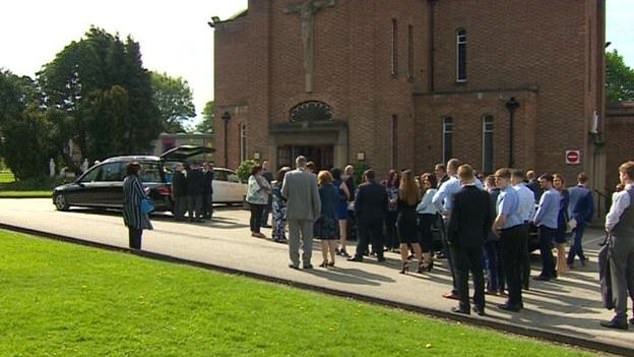 Loved ones and well-wishers are pictured at the funeral for little Rocco Wright, who drowned in a swimming pool

‘We will never get over our loss and continue to grieve daily for the life Rocco never got to live. ‘

The head office at David Lloyd had set a ratio of 1 lifeguard to 50 pool users across their 100 clubs nationally.

The ratio recommended by the Royal Life Saving Society is a maximum ratio of 1 lifeguard to 30 pool users.

The inquest previously heard this was set by the club at least 18 years ago with no review since.

The Health and Safety Executive provide guidance for swimming pool safety which recommends two lifeguards for a pool of the size at the Leeds club.

‘Subsequent evidence given by David Lloyd Leisure at the inquest showed no evidence of budget cuts to lifeguarding at the Leeds Club at the time of the accident, on the contrary lifeguarding had in fact received increased investment.’