He tied the knot with Lily Allen at the iconic Graceland Chapel in Las Vegas back in September, following months of secret planning.

And David Harbour, 45, has shared gushing words about his relationship with the ‘beautiful, incredible’ British singer, 35, branding her a ‘deeply kind individual’.

The Stranger Things star also admitted that life with Lily and her daughters Ethel, nine, and Marnie, seven, has made him feel ‘like more of a man’.

So in love: David Harbour, 45, has shared gushing words about his relationship with ‘beautiful, incredible’ wife Lily Allen, 35, branding her a ‘deeply kind individual’. Pictured in January

‘I married a beautiful, incredible woman who I love,’ he told People. ‘I have never met someone who is so deeply kind as her. I’ve never felt so taken care of and cared for by another human being. She really is just a deeply kind individual and I love that about her.’

On becoming a stepdad to Lily’s daughters, who she shares with ex Sam Cooper, the New York native admitted their relationship has made him see life differently.

He went on to admit that becoming a family man has changed his views on fatherhood, making him feel ‘every cliché from every sitcom you’ve ever heard’.

Nuptials: The couple tied the knot at the iconic Graceland Chapel in Las Vegas – complete with an Elvis Presley impersonator – back in September, following months of secret planning

He said: ‘It’s a cliché that we make fun of constantly in television and in books and I had always watched it with a grain of salt going, “Eh, whatever, it’s not the real deal.” And now I am in it. That sort of hits it on the head.’

Lily recently revealed that her wedding to David was supposed to be a ‘very private’ affair, but Nevada Clark County tweeted their marriage certificate.

The singer married the actor at the iconic Graceland Chapel in Las Vegas in September with the couple planning to keep the nuptials a secret.

Speaking on the Sex, Lies & DM Slides podcast recently, the star joked that ‘what happens in Vegas, gets tweeted out by Vegas’. 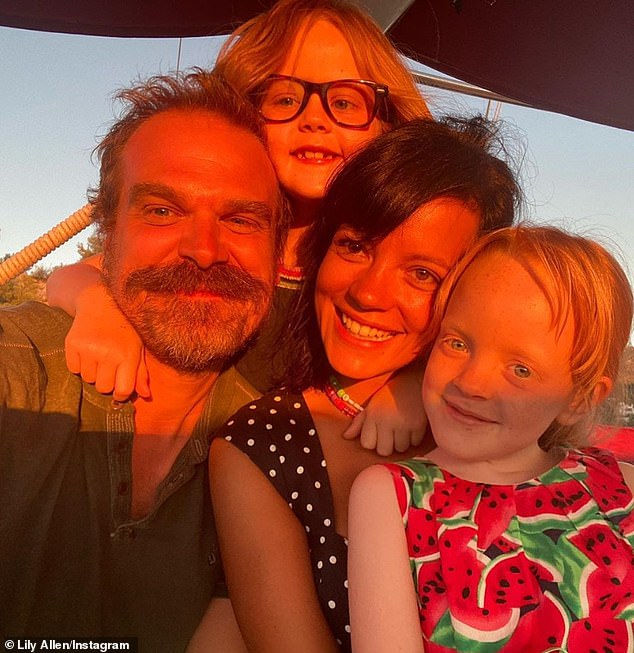 Family man: The Stranger Things star also admitted that life with Lily and her daughters Ethel, nine, and Marnie, seven, has made him feel ‘like more of a man’

Lily said: ‘We didn’t plan to announce it to anyone, it was meant to be a very private affair we were leaving Vegas and driving to Los Angeles and Nevada Clark County tweeted our marriage certificate.’

The star added that she never planned to marry in Vegas and that due to COVID-19 lockdown it was one of the few places able to do weddings.

Lily joked: ‘So it seemed to be the only place that was stupid enough to have ceremonies so… it happened!’

Making their nuptials a true classic Las Vegas affair, the lovebirds were married by an Elvis Presley impersonator. 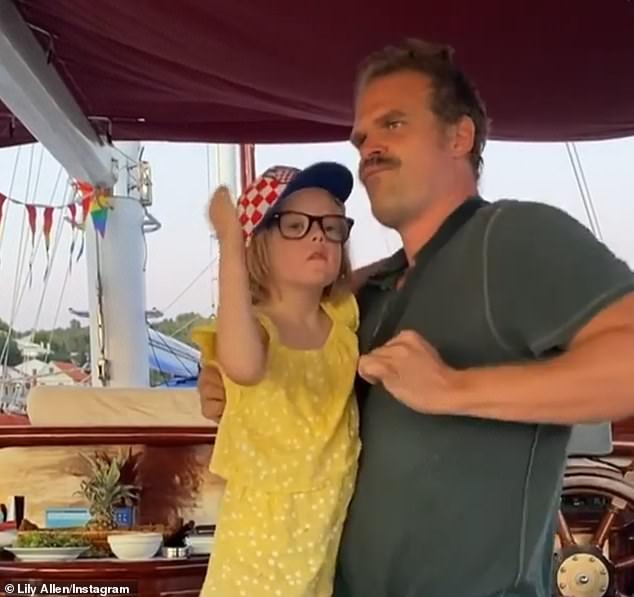 Quality time: The US actor enjoyed a late summer boating trip to Croatia with Lily and the girls

At the time, Clark County Nevada tweeted the couple’s marriage certificate and revealed they had tied the knot.

They tweeted: ‘Las #Vegas is the wedding capital and two celebrities got married over the #LaborDay weekend. This is the marriage certificate for “#StrangerThings” actor #DavidHarbour and English singer #LilyAllen.’

After the marriage certificate was tweeted, Lily confirmed the news on her social media and shared a slew of Instagram snaps, which saw the couple celebrate their union with dinner at the fast food chain In-N-Out.

The pair were joined by Lily’s children Ethel and Marnie as they tucked into their fast food outside.

Referencing their laid-back nuptials, David penned on Instagram: ‘In a wedding officiated by the king himself, the people’s princess wed her devoted, low born, but kind credit card holder in a beautiful ceremony lit by the ashen skies courtesy of a burning state miles away in the midst of a global pandemic. 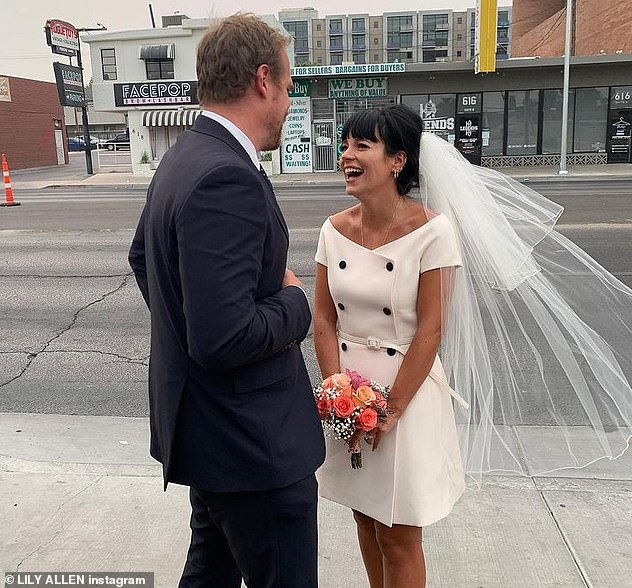 Private! Lily recently said that her wedding to David was supposed to be a ‘very private’ affair but Nevada Clark County tweeted their marriage certificate