By Peter Carline for MailOnline

A quarter of NFL teams are looking for a new head coach after the Houston Texans fired David Culley.

The 66-year-old took over last January and was a calming presence. While Houston’s record was 4-13, it is tough to imagine many coaches reaching that number of wins with the resources at his disposal.

Culley, who spent 43 years as a college and NFL assistant, worked well with rookie quarterback David Mills, a third round draft pick.

Without a first round draft pick – an unwanted relic of the Bill O’Brien regime – the Texans’ season was doomed before it began.

Star quarterback Deshaun Watson demanded a trade soon after Culley was hired and was then sidelined after 22 women filed lawsuits alleging sexual assault or harassment.

Following a 28-25 defeat against the Tennessee Titans in the season finale, Culley – who had signed a five-year deal – said: ‘As far as I know, I’m the head coach of the Texas moving forward.

Texans general manager Nick Caserio, who was hired last year, will now look to appoint the second head coach of his short spell.

Culley’s sacking follows that of Brian Flores by the Miami Dolphins. It means that Mike Tomlin of the Pittsburgh Steelers is the NFL’s only black head coach.

Despite back to back winning seasons, Flores was surprisingly sacked on Monday after winning eight of the last nine games.

Owner Stephen Ross hinted that the decision was made on off-the-field matters, saying: ‘I think an organisation can only function if it’s collaborative and it works well together, and I don’t think we were really working well as an organization… to win consistently at the NFL level.’ 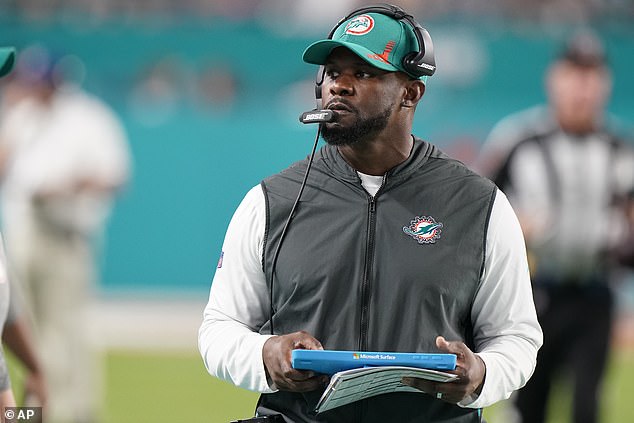 On Monday, Joe Judge was dismissed after leading the New York Giants to 4-13, missing the playoffs for the fifth straight year.

After sacking the third coach since December 2017, owner John Mara said this season was the nadir in his 30-year association with the franchise.

‘Honestly, I would have to say yes, yes, it is. I kept thinking during this season that we had hit rock bottom, and then each week it got a little worse,’ he said.

The Las Vegas Raiders are in the playoffs despite the resignation of Jon Gruden on October 2 and one of the more dysfunctional seasons in living memory.

Interim coach Rich Bisaccia has worked wonders and must be a serious contender for the post.

The Jacksonville Jaguars are also on the hunt for a new head coach after owner Shahid Khan ousted Urban Meyer during a disastrous season.

And in the NFC North, both the Chicago Bears and the Minnesota Vikings are looking for new general managers and head coaches.

The Bears called time on the Matt Nagy-Ryan Pace axis, while Rick Spielman and Mike Zimmer were fired by Minnesota.