The former footballer, 47, looked dapper in a black suit as he was joined by the comedian, 43, who put on a casual display in a charcoal polo top.

He soon shared a warm hug with the professional basketball player, 37, whose agent and boyfriend of Adele, 40, posed for a photo alongside the beaming talk show host.

Pals: David Beckham (left) looked dapper in a black suit as he partied with James Corden, Lebron James (right) and Rich Paul at an American Express event on Saturday in Miami

The InterMiami FC chatted away with an animated LeBron who cut a trendy figure in a grey shirt and a collection of dazzling silver necklaces.

Rich donned a classic navy sweater and jeans while framing his face with a pair of round gold-rimmed sunglasses.

David and the Gavin & Stacey star appeared to be deep in conversation over dinner, having been sat next to one another at one of the tables. 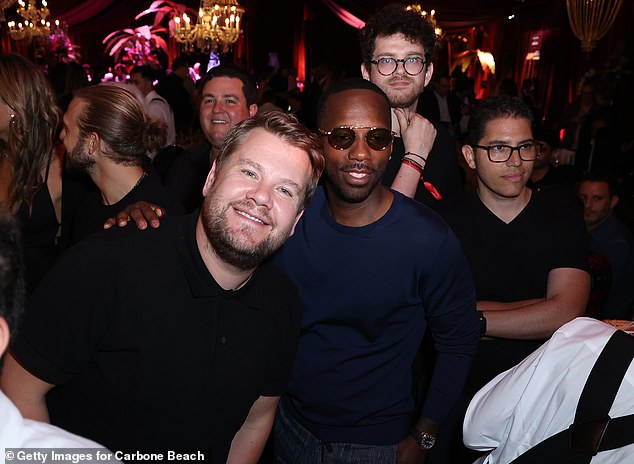 Happy: Rich (right), the boyfriend of Adele, 40, posed for a photo alongside the beaming talk show host (left) 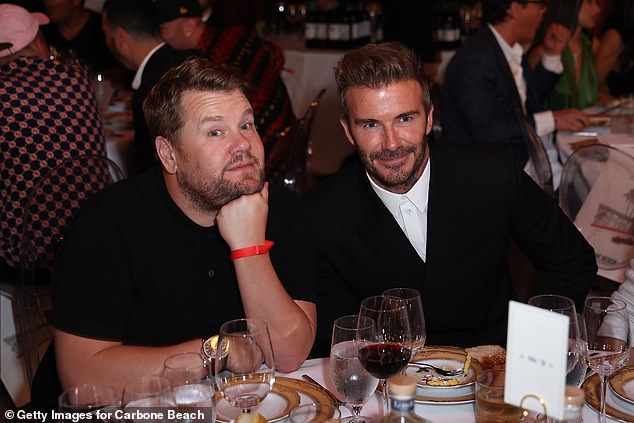 What a pair! The comedian, 43, who put on a casual display in a charcoal polo top, had been sat next to David at one of the tables 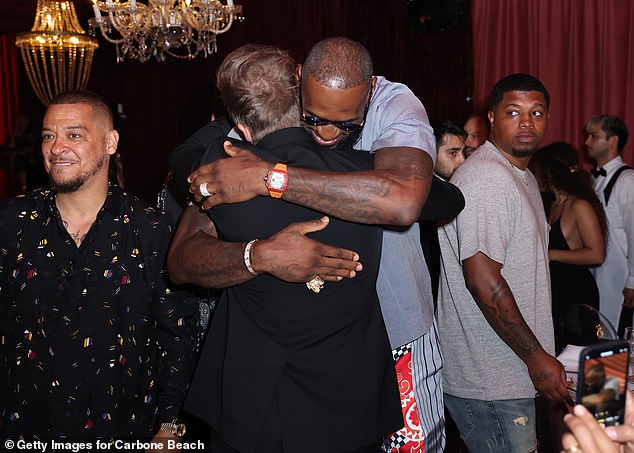 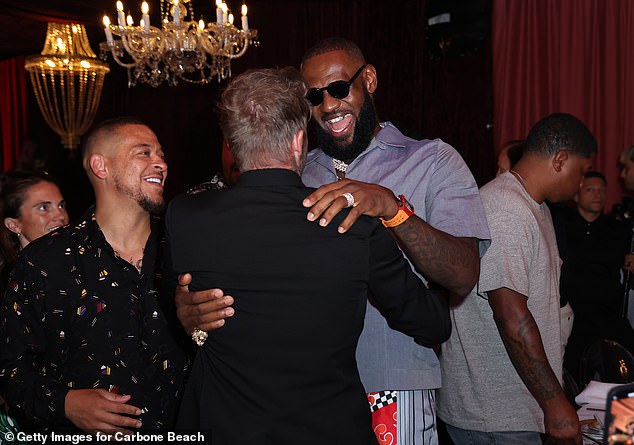 Looking good: The InterMiami FC chatted away with an animated LeBron who cut a trendy figure in a grey shirt and a collection of dazzling silver necklaces

It comes after The Mail on Sunday revealed James turned down a ‘name your price’ multi-year deal from television bosses to stay in the US.

The surprise announcement that he will quit America next year – despite an estimated £40 million offer to remain – has shocked Hollywood.

The actor revealed he will return to Britain seven years after arriving in Los Angeles amid great fanfare to present The Late Late Show for US broadcasting giant CBS. 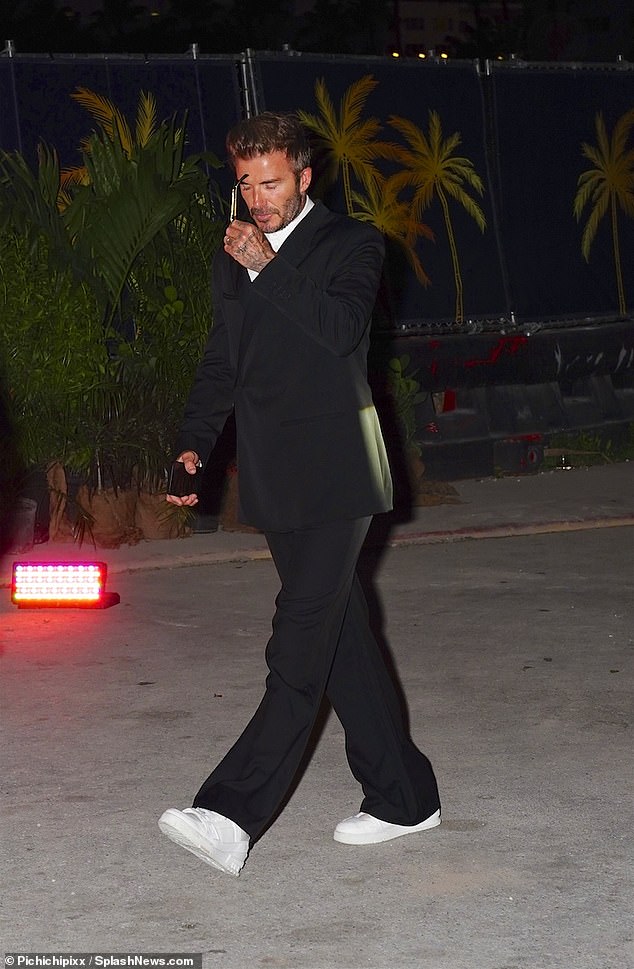 Emerging: David put his best fashion foot forward in a pair of white trainers while removing a pair of sunglasses 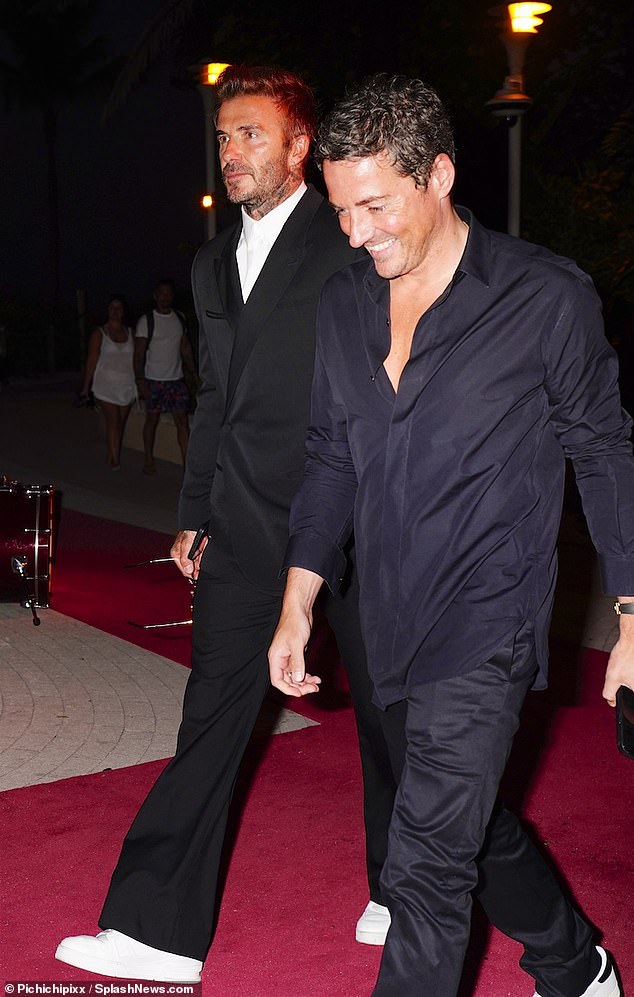 Fashion forward: Cutting a pair of baggy trousers, he was joined by a pal as they hit the red carpet

He and his wife Julia live with their three children in the exclusive LA suburb of Brentwood. Their £7.5 million mansion has five bedrooms, eight bathrooms and a home cinema. The Cordens are not expected to sell their house in Los Angeles.

Julia is an interior designer to stars such as the Duchess of Sussex and the couple’s friends include chef Gordon Ramsay and his wife Tana, actress Jennifer Lawrence and singer Adele.

The family revel in the glitzy world of Hollywood so it is a major shock that Corden has decided to walk away from his £7 million-a-year role presenting the nightly programme. 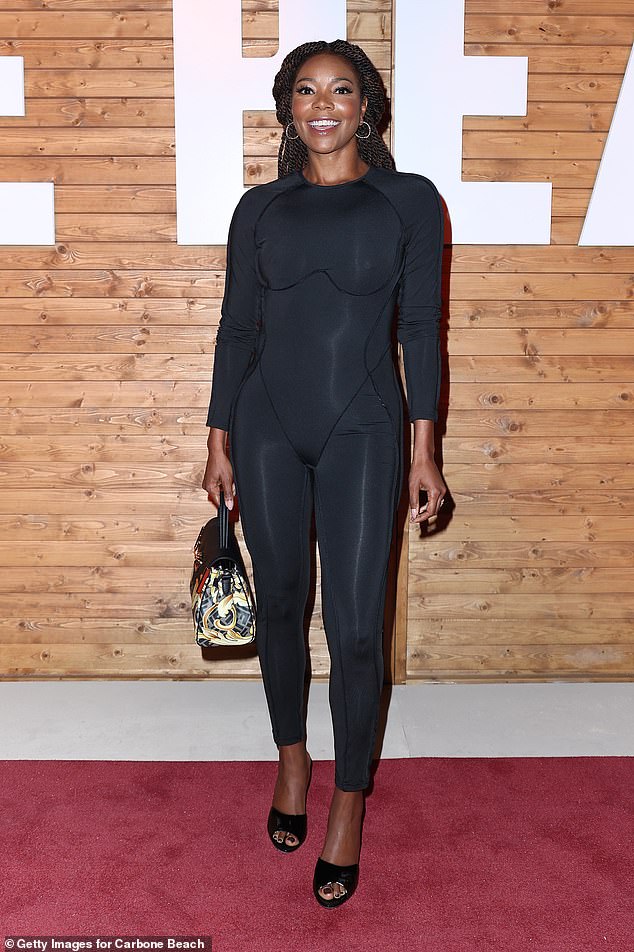 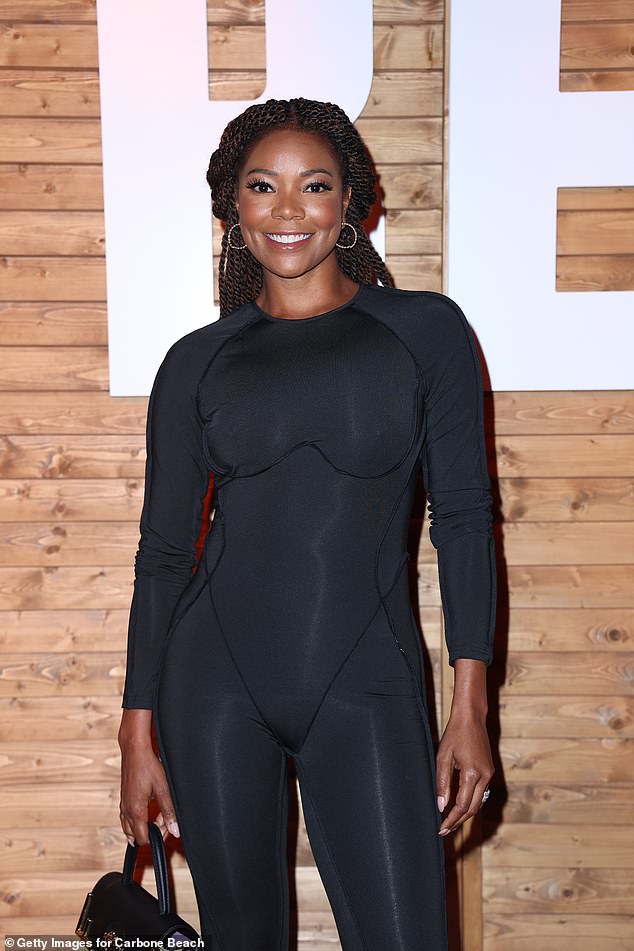 Wow! She showed off every curve of her enviable physique through the form-fitting outfit 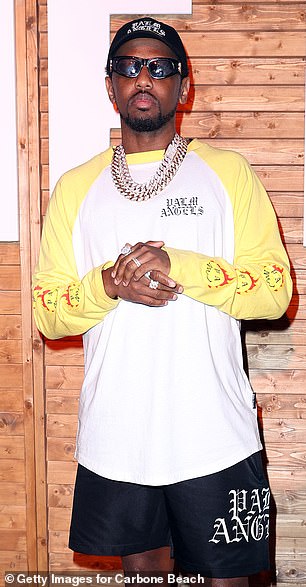 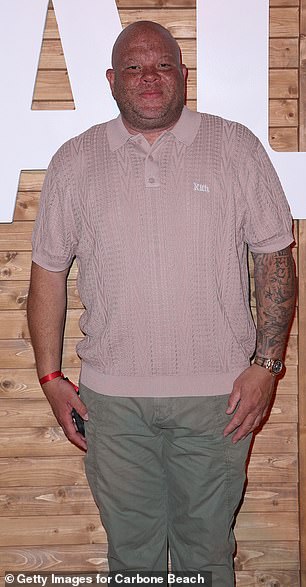 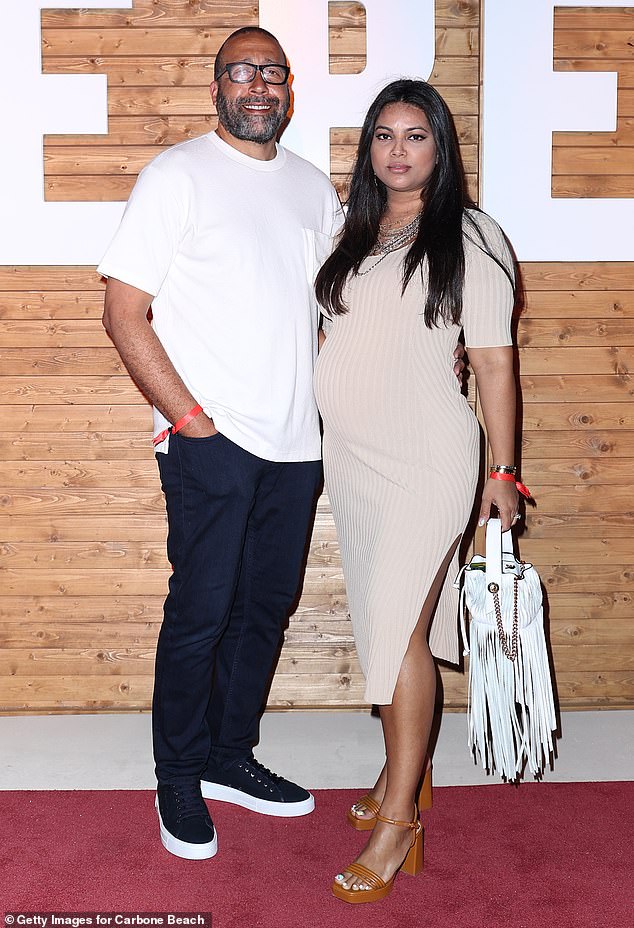 Loved up: David Fizdale and his pregnant wife Natasha Sen cosied up on the red carpet

One senior Hollywood executive said of James’ departure: ‘Nobody can understand why he’s made this sudden decision to walk away, particularly when he was being offered the Earth to stay.’

His contract had been set to expire this August, but he has signed an extension that will keep him on the show until next spring – the time he is expected to return to Britain.

Despite getting a further 12 months out of the star, CBS President George Cheeks spoke of his sorrow that he would be losing the presenter. He said shortly after James’ announcement: ‘We wish he could stay longer, but we are very proud he made CBS his American home.’ 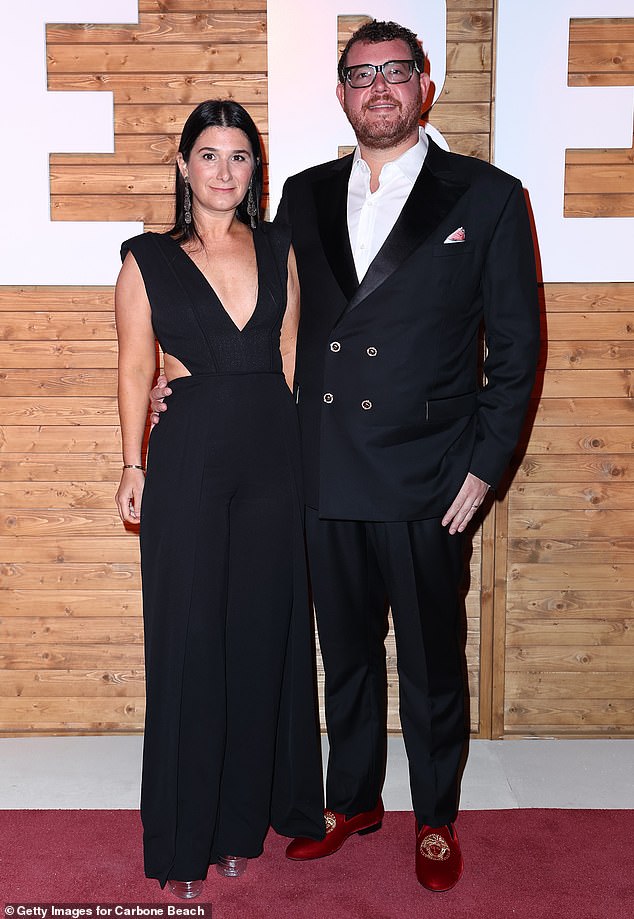 Couple: Ali and Jeff Zalaznick looked chic in their navy ensembles while posing for cameras 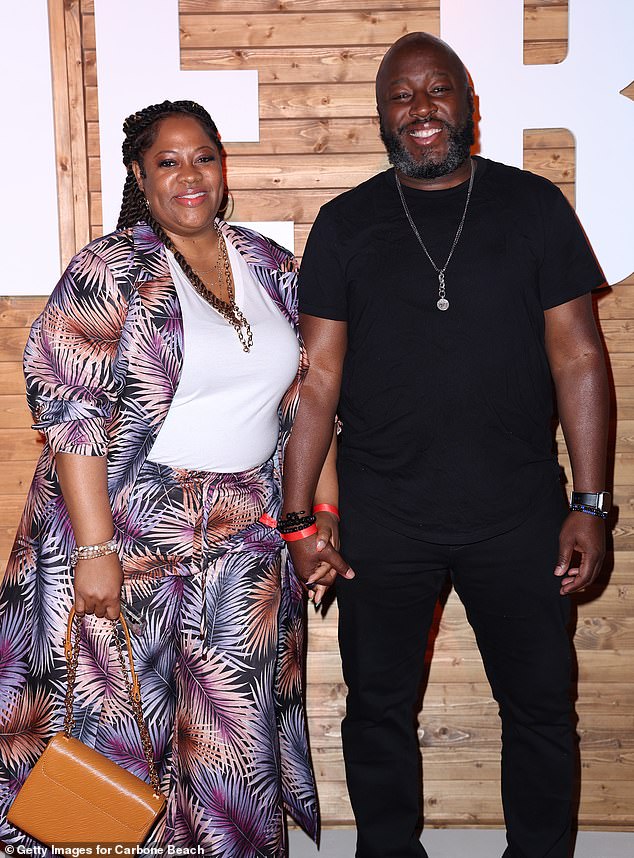 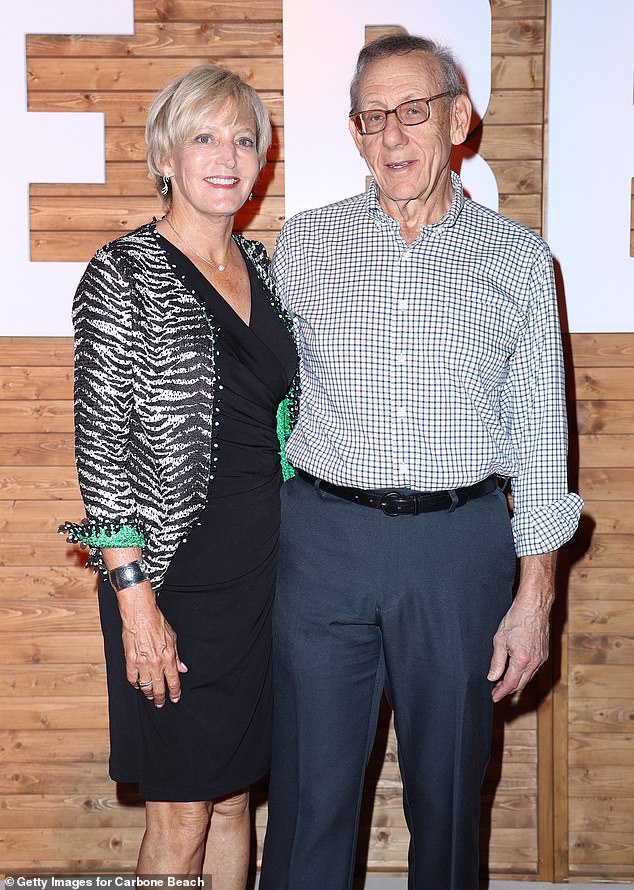 Happy: Kara and Steve Ross appeared to be in high spirits as they followed soon afterwards

A source close to the presenter was quick to point out that the big-money offer wasn’t something that would have enticed him to stay.

They said: ‘He could have gone down the cash route with Gavin and Stacey, taken the cheque and written it for ever, but he chose not to. This is the same.’

In his statement, James said he doesn’t want to ‘outstay his welcome’, although his friends cite different reasons, such as the risk of getting typecast. 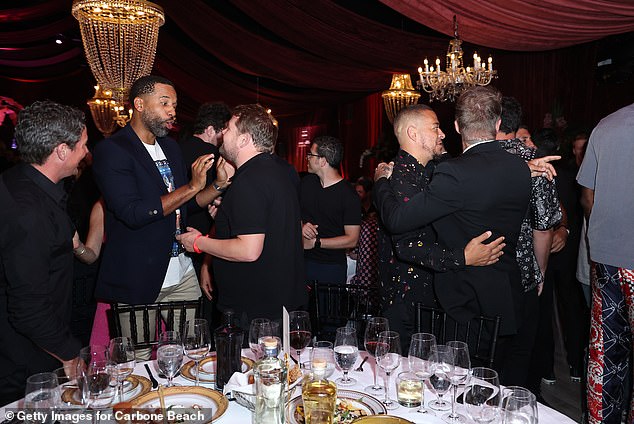 Having a blast: James (left) and David (right) seemed to be in deep conversation with their fellow attendees at the event 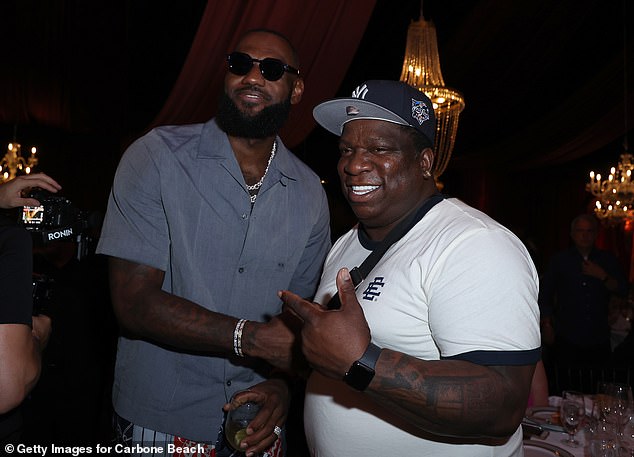 Star: Lebron (left) joined a fan for a snap, who wore a white T-shirt and a black baseball cap 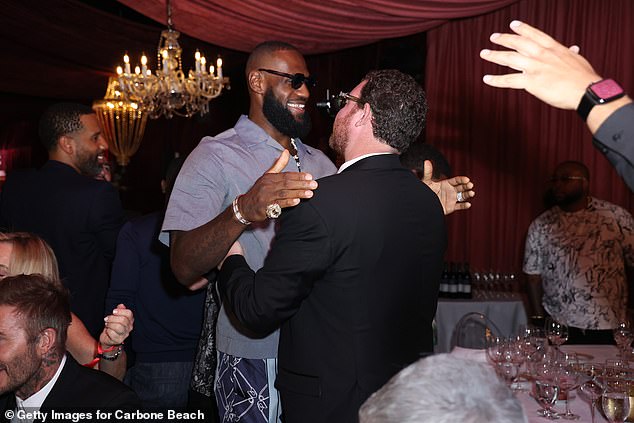 Beaming: Lebron James (left) welcomed Jeff (right) with a hug, while David (far left) sat nearby at his table 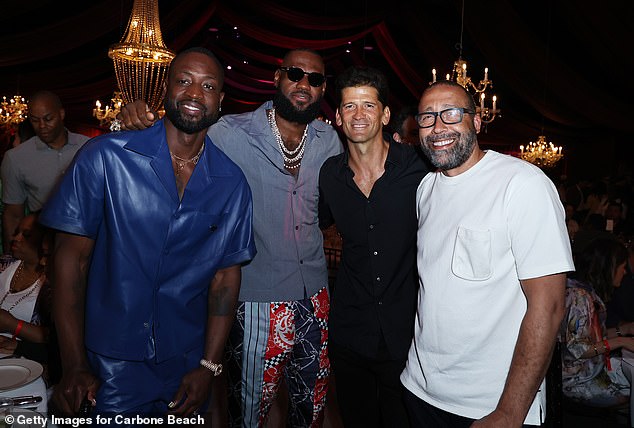 Gang: Dwyane Wade, Lebron, Wayne Boich and David Farcy (L-R) got together for a group shot

He also revealed his far that his parents in England will grow old without seeing much of his children – Max, 11, Carey, seven, and four-year-old Charlotte.

Filming four shows each week and recording skits such as his hugely successful Carpool Karaoke, where he sings along with celebrities such as Michelle Obama and Ed Sheeran while driving around LA in his Range Rover, is time-consuming

The skits, along with those featuring Sir Paul McCartney, Adele and Lady Gaga, have generated more than a billion YouTube views. Adele’s 2016 appearance has more than 250 million views. 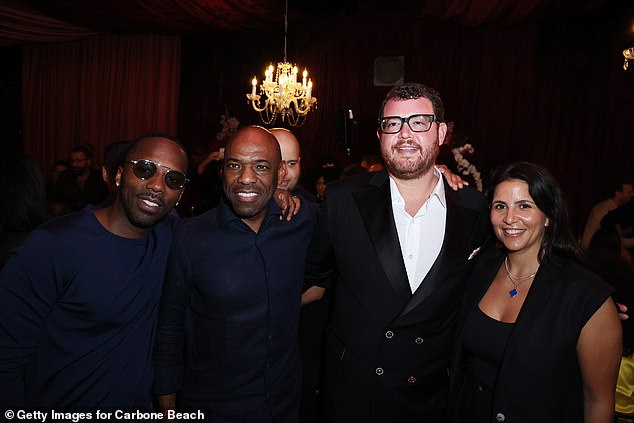 Group: Rich (far left) and Jeff (centre right) were joined by other guests for a picture 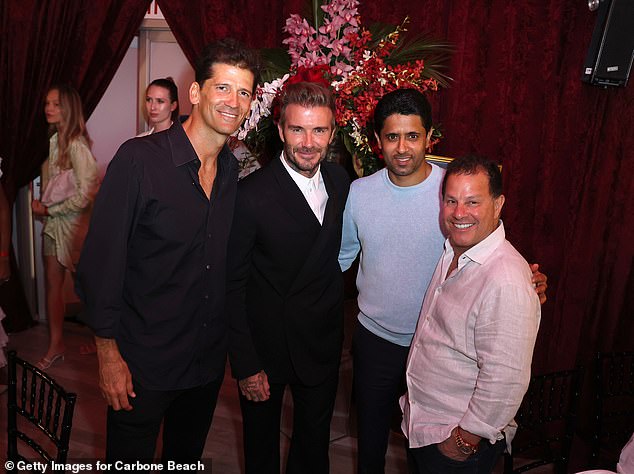 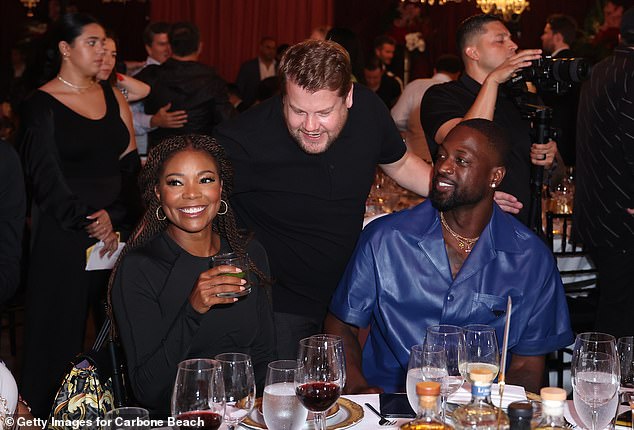 Hello! Gabrielle Union and her husband Dwayne Wade (right) were joined by James (centre) at one point 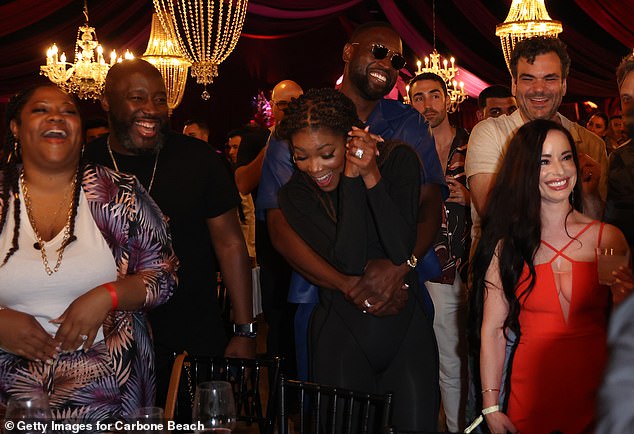 Adorable: Gabrielle and Dwayne seemed in great spirits as they danced up a storm in front of onlookers

Last December, The Mail on Sunday revealed there were questions over the future of the television production company Fulwell 73, which makes The Late Late Show.

Documents showed that the umbrella company which owned three other firms was due to be dissolved, which would have meant James would no longer be involved in the business.

Freuds, the public relations company hired by Fulwell, refused to answer questions on the matter. 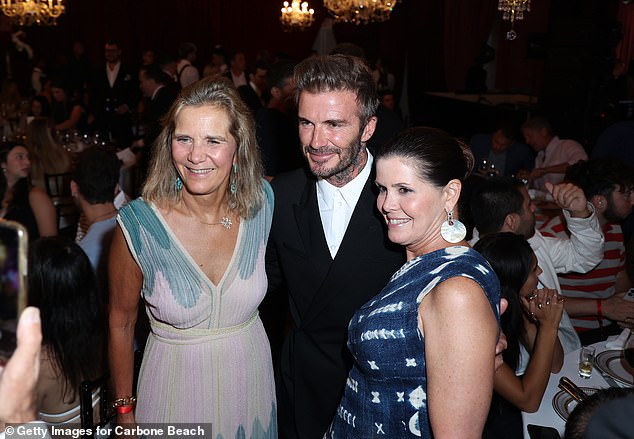 Dapper: David posed with some fans inside the lavish venue 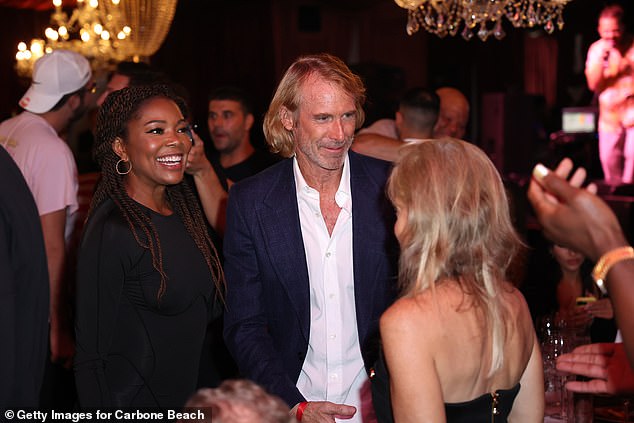 Out of this world: Gabrielle flashed her pearly whites while standing next to Michael Bay 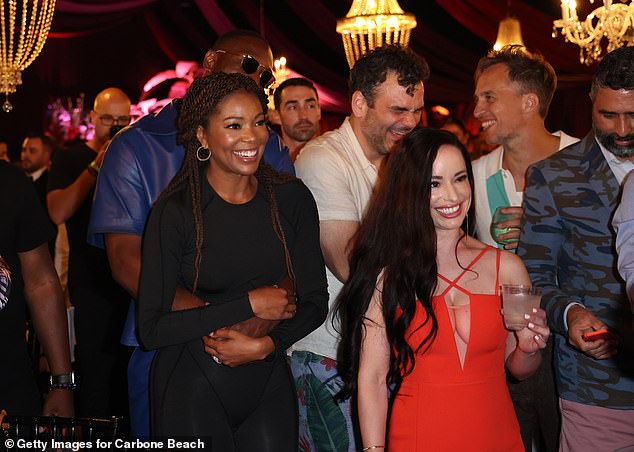 Cute: Dwyane and Gabrielle couldn’t keep their hands off each other while dancing

It followed rumours that the star and his best friend of 25 years, Ben Winston, executive producer of The Late Late Show, had fallen out.

The two friends left London for Hollywood in January 2015 and are still there working together. Both parties staunchly deny a fall-out.

Indeed, Winston took to Instagram last week following James’ announcement to say that ‘there has been no greater joy than going to work each day with my best mate and the most talented guy in the world’. 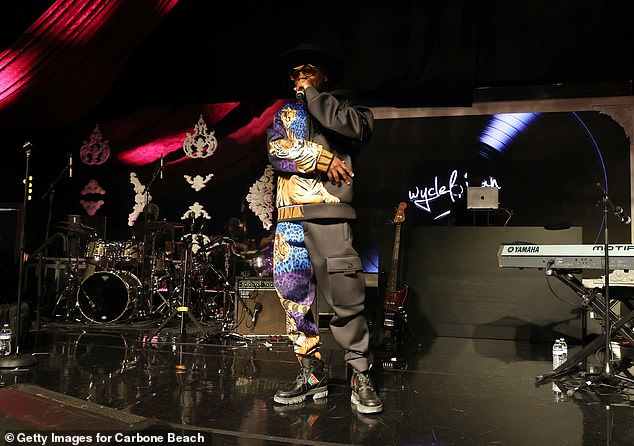 Talented: Wyclef Jean performed his greatest hits for the star-studded guests on stage