David and Victoria Beckham’s idyllic life at their £6million home in the Cotswolds is reportedly on the verge of being disrupted by the construction of a huge car park.

The 100-space underground car park has been planned by nearby private members club Soho Farmhouse, according to The Sun.

In a bid to meet demand, the group will also reportedly build six five-bedroom lodges, an upscale leisure centre with pool and a restaurant a stone’s throw away from the mega-rich family’s countryside bolthole.

New build: David and Victoria Beckham’s idyllic life at their £6million home in the Cotswolds is reportedly on the verge of being disrupted by the construction of a huge car park

The Sun reports that West Oxfordshire District Council received notice that works had begun on the large project on March 31, three years after plans were approved.

MailOnline has contacted representatives for Victoria Beckham and Soho Farmhouse for comment.

David and Victoria will also be busy building, as they are set to install a secret underground tunnel, wine cellar and ‘super garage’ at their Cotswolds home after being awarded planning permission.

The couple are currently in lockdown at the £6 million country property with their three youngest children, Romeo, 17, Cruz, 15, and Harper, eight. 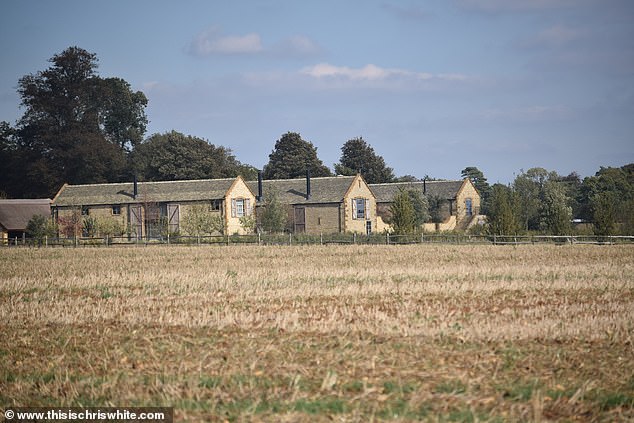 Home: The Beckhams own a home in the idyllic Oxfordshire enclave, where they’ve been spending the summer months amid the nationwide lockdown

Now they have been granted permission to extend their sprawling property, as long as they begin the work within three years.

David, 45, and Victoria, 46, are said to have been keen to install a secret getaway tunnel in order to amp up their security.

The plans were made just weeks after footballer Dele Alli was robbed at knifepoint at his north London home and Robbie Williams spoke about his break-in fears.

The pair also applied to West Oxfordshire District Council to build a basement ‘wine room’ measuring 6.8m by 8.4m underneath the proposed extended garage with a linked walkway to the main house in the quaint village Great Tew.

They are working with architect Michael Ergatoudis, who has designed all their renovations since they bought the property four years ago.

Michael said in the Design and Access Statement: ‘This application seeks planning permission and listed building consent for an extension to the existing garage outbuilding with basement cellar beneath linked to the main house.

‘The extension to the garage outbuilding is to provide additional garage space, home office space and storage.

‘The basement cellar beneath Is for storage of wine, and is linked to the wine room in the main house. 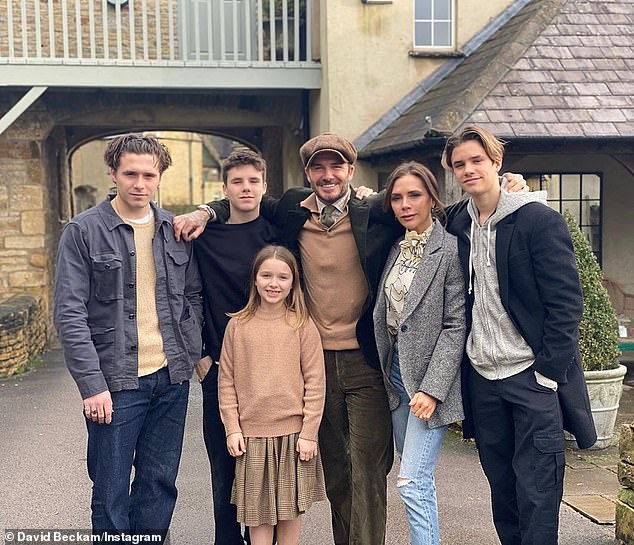 Family fun: The couple are in lockdown with their three youngest children, Romeo, 17, Cruz, 15, and Harper, eight. Eldest son Brooklyn, 21 (left) is isolating in the US with girlfriend Nicola Peltz

The property is a Grade II-listed converted farm and barn and the underground tunnel had to be carefully considered by the council that it had no impact on the historical surroundings.

The famous pair have a separate planning application currently being considered to build a security gatehouse, which one local resident complained wasn’t in keeping with the area, but then a few days later withdrew his letter of objection.

The couple were reportedly ‘at war’ with neighbours over plans to build a gatehouse for two round-the-clock security guards at the entrance.

The ex-England captain and his former Spice Girls star wife were said to be ‘ruining the ambience of the picturesque village’.

The Beckhams hoped to convince those living in the upmarket area of their plans by saying the gatehouse would ‘improve security for occupants’ of the mansion and its surrounding grounds.

The famous family angered neighbours by relocating from London to their second home in Oxfordshire at the start lockdown.

They were branded ‘selfish’ by one local, who told MailOnline in April: ‘The Beckhams and these other fancy folks who think it’s a good idea to self-isolate in the country are just being selfish.’

A local counsellor shared their views at the time saying: ‘Showing off your beautiful country mansion on social media and telling us all what a wonderful time you’re having is just rubbing our noses in it.

‘The Beckhams and other celebrities are just being stupid, irresponsible and insensitive.’ 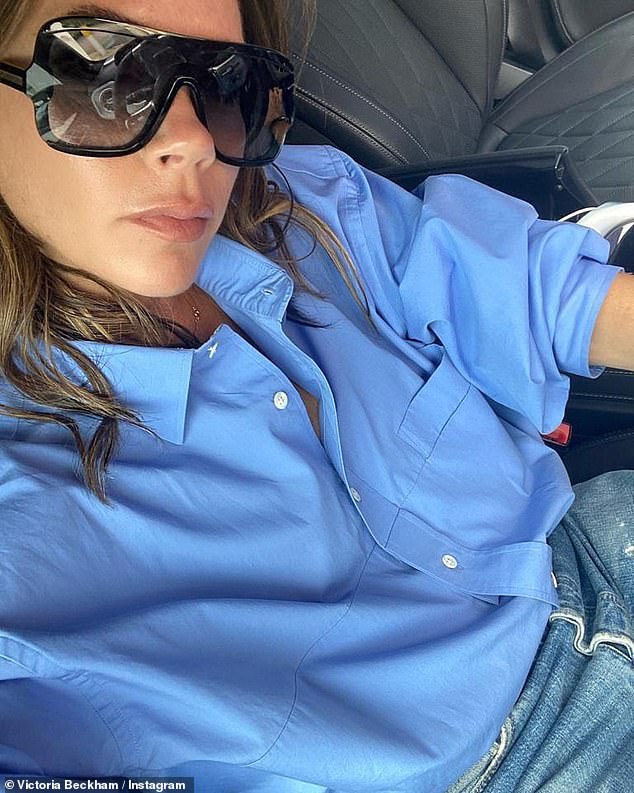 Still at it: Victoria and David were reportedly ‘at war’ with neighbours over plans to build a gatehouse for two round-the-clock security guards at the entrance