The heartbroken dad of a ‘loving daughter who never stopped laughing’ has paid tribute to her after she tragically passed away aged just 22 after contracting coronavirus.

Philippa Raper sadly lost her life at Diana, Princess of Wales Hospital in Grimsby on Monday after a battle with the coronavirus.

She is one of the youngest victims of Covid-19 and had a number of serious underlying health complications.

She had been self-isolating at home in Laceby because of her vulnerability, but tested positive when she was taken to hospital after her health deteriorated.

Heartbroken dad, David, said she ‘never stopped laughing’ and was enjoying life despite her challenging illnesses.

Sadly, he didn’t get the hospital from his home in Bradford in time to see her before she passed away. She had been improving and had even sat up and waved to him on a video call the previous day.

David said: ‘Philippa has been on supported oxygen for the past 11 years, but over the past few years she has been living happily. 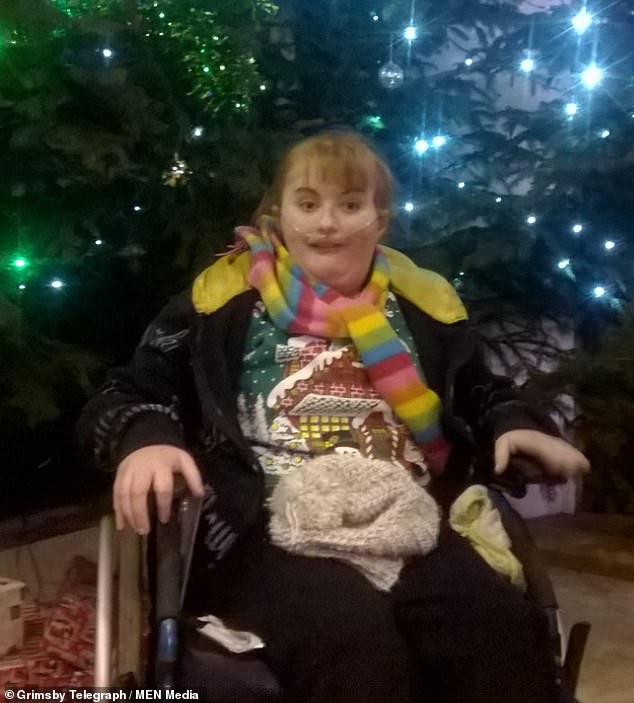 ‘She was one of the people who had to self-isolate, but unfortunately she ended up catching it and sadly passed away.

‘I live over in Bradford with my partner, and Pippa visited me for a few days until March 22, the day before the lockdown got put in place.

‘It was actually the longest I’ve been without seeing my daughter for a very long time, and she ended up catching it and passed away before I made it to the hospital to see her, I’m just heartbroken.

‘It’s just so sudden because we thought she had turned the corner with it. She had even sat up and waved at me at Sunday tea-time, the day before she passed away, when we were video calling each other.

‘I missed her by 30 minutes as I was driving to Grimsby to see her. They had informed us that it would be best to start end of life care and I tried to get over in time, but she passed away shortly after that.’

Philippa was born on September 20, 1997, and lived in Camblesforth, near Selby, for several years, before moving to Laceby with her mum.

When Philippa was first diagnosed with Covid-19, she remained at home and was supported by her mum, Helen, and step-dad, Matthew, but her condition worsened quickly.

David said: ‘She started with symptoms on Monday of last week and did a test in the hospital. The test came back positive and she remained at home and was doing well until her condition worsened. 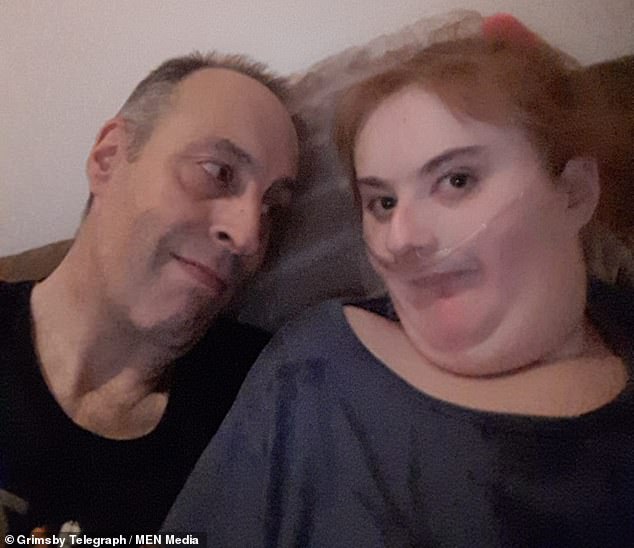 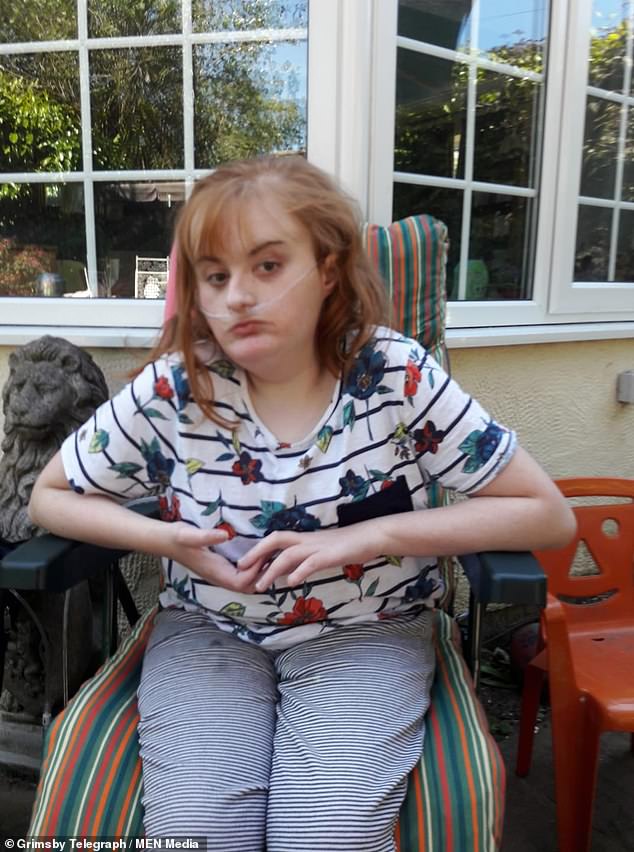 ‘But they have told me she passed quickly and peacefully. She must have been scared, but even the NHS staff said that she had a great sense of humour.

‘She was just an amazing person, and brought a smile to the face of everyone that met her, and she will be so sorely missed.

‘I’d just like to personally thank her mother for trying so desperately hard with her cares at home once she had been tested.’

Philippa was diagnosed with borderline hydrocephalus while in the womb, which is a build-up of fluid in the brain.

This led to her having a number of health issues, where she had to eat via a tube going into her stomach from three-and-a-half years old, as well as being wheelchair bound.

She also needed to be supported with oxygen after developing a lung disease. David said: ‘When her mum was pregnant with her, she was diagnosed

with borderline hydrocephalus, and we were told then that she may not have a normal life.

‘When she was a baby she was struggling to eat and they ended up having to put a tube in her stomach to feed her, and she was fed like that from about three-and-a-half years old. 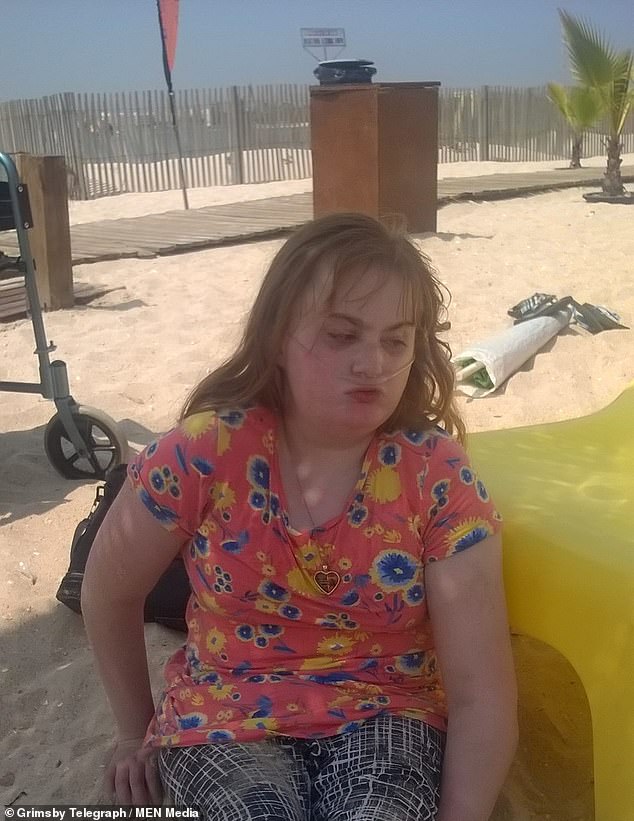 ‘Then, in 2008, she was really ill again, and was taken to Leeds hospital and needed a ventilator, and she had been on supported oxygen ever since.

‘She could still go everywhere though, she’d just take her oxygen with her and just had to make sure her tubes didn’t get caught on anything.

‘She loved to travel, she visited over 10 countries in her life, including seeing the Statue of Liberty in New York and the Indian ocean in Australia.

‘We took her to a disability centre on The Algarve as well, which is a specialised holiday centre for families with special needs children.

‘In recent years, she also spent time at the Weelsby Hall. The staff loved her there, and she always loved pushing herself around in her big wheelchair and enjoying herself.

‘It breaks my heart because she was developing constantly, just slower than most people.

David intends to cherish his daughter’s memory and celebrate her life with the many people that she has affected with her smile along the way. 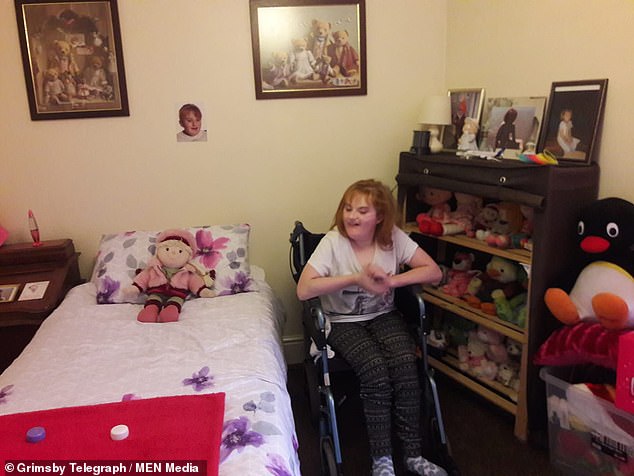 ‘She gave me more love in those 22 years than anyone else ever could. She was always laughing, even when there was nothing to laugh about, and telling me to take her to the washing machine when it was on so she could watch it go round and round.

‘When I go to her funeral, it won’t be me saying goodbye, I will be celebrating her birthday with all of the people whose lives she has affected and made better.

Philippa is survived by David, her mum, Helen Williams, and her step-dad, Matthew Williams.

A total of 41 people have now died in northern Lincolnshire hospitals after testing positive for Covid-19.