A woman who lay side-by-side in intensive care with her mother as she died from Covid has warned others ‘don’t let this be you’.

Anabel Sharma, 49, and her mother Maria Rico, 76, lay next to each other in hospital as they both battled Covid-19 after the virus ‘ravaged’ her family.

The pair were pictured for a final time as they held hands while both receiving support for their breathing. Less than 24 hours later, Maria had died.

Now, in a stark warning about the dangers of the virus, mother-of-three Anabel, from Leicestershire, has urged others they could lose family members if they do not stick to the rules.

Speaking to the Mirror she said: ‘I never thought Covid would hit us – but it did. The speed Covid ravaged through our family was frightening.

Anabel, 49, and her family, all fell ill from Covid towards the end of last year 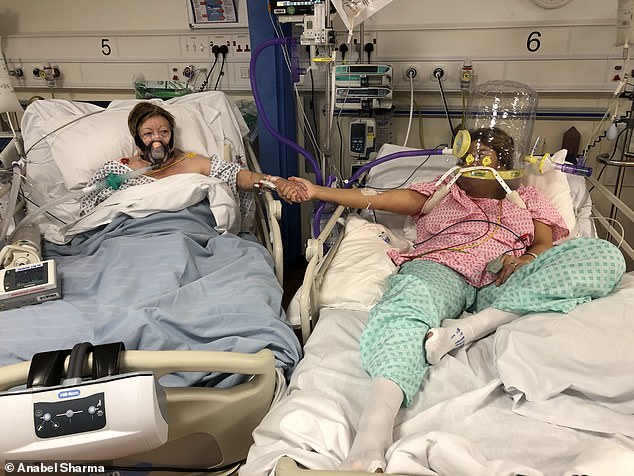 ‘If anyone is thinking about breaking the rules, I’d urge them to put themselves in my shoes and think about what it might be like to watch your mum die, or be told that you might not live.’

Anabel, 49, and her family, all fell ill from Covid towards the end of last year.

Her 12-year-old son first Isaac contracted Covid following the return to school in September, according to the Mirror.

Anabel, her husband Bharat, 47, and her other sons Jacob, 22, and Noah, 10, later contracted the virus, the paper adds.

Her mother Maria was the last to test positive for Covid.

Bother Anabel and Maria taken to Leicester Royal Infirmary in mid-October and put onto oxygen beds away from each other.

But after Maria signed a Do Not Attempt Resuscitation (DNAR) order, Maria was wheeled in a bed next to Anabel.

Maria died on November 1 – 24 hours after the pair had taken a picture together showing her on a breathing machine and Anabel in an oxygen mask.

Anabel said she took off the oxygen mask in order to say goodbye to her mother.

In an emotional post on Facebook page ‘Humans of Covid-19’, Anabel said the ordeal had been the ‘darkest period of my life’.

She said: ‘By the time my mum and I were rushed to A&E, we both needed ITU but they were full.

‘We only got our beds because four patients died that day, freeing up spaces.’

She described the type of treatment she received for Covid – Continuous positive airway pressure (CPAP) – as ‘horrific and relentless’.

‘I had to wear a plastic hood 24/7 for four weeks that forced oxygen into my lungs.

‘It felt like sticking your head out of a car going at 30mph, it was noisy, I couldn’t see, hear, and they fed me though an opening on the side of the hood,’ she added.

Anabel also revealed she was unable to attend her mother’s funeral due to Covid, adding: ‘I watched it via live stream. I was alone, as were my family, we couldn’t comfort each other, it broke my already fragile heart.’

In a warning to others about Covid, she said: ‘What you read about NHS bed pressures is true, it isn’t like the flu and people are dying or if they are a survivor like me, they may never be the same again.’