The daughter of a strongly pro-Putin senator in Russia has fled abroad fearing persecution and jail after he branded her a ‘traitor’ for opposing the war in Ukraine.

Diana Isakova, 25, posted flyers against the conflict which led to her arrest and interrogation by the feared FSB secret service.

Her father Eduard Isakov, 48, reacted with fury, having previously warned her not to criticise Putin or the authorities on social media.

‘We had a conversation, and all of my fears came true,’ the yoga teacher told Medusa media outlet.

‘He told me I was a traitor to our family, an enemy of the people, and a criminal.’

When the war started, she saw the anguish of Ukrainians who she followed on Instagram, she said.

‘These girls’ stories were full of bombs and sobbing. I felt their suffering as if it were my own.’

She staged a ‘brave’ protest in Sochi which led to her rapid arrest, and now claims Putin embodies ‘cruelty, arrogance, and impunity’.

Diana Isakova, 25, posted flyers against the conflict which led to her arrest and interrogation by the feared FSB secret service. Pictured: Diana with her father in happier times 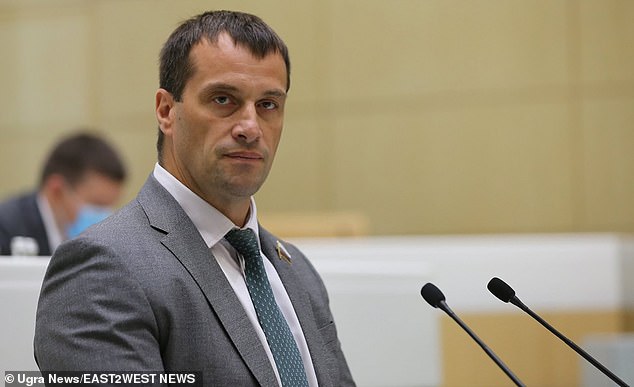 Her father Eduard Isakov, 48, a pro-Putin senator, pictured, reacted with fury, having previously warned her not to criticise Putin or the authorities on social media 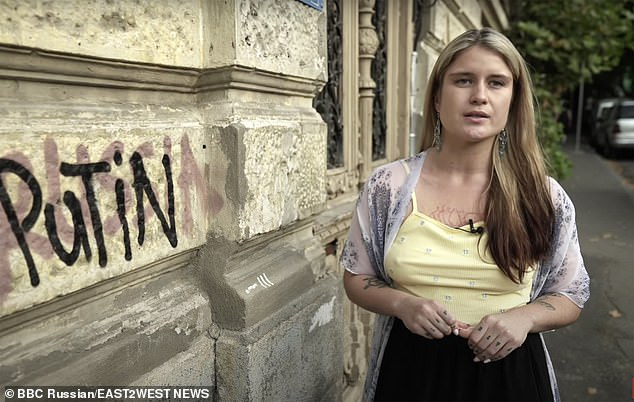 Diana, pictured, said that her father told her she was a ‘traitor’, ‘an enemy of the people’ and a ‘criminal’ for her Anti-Putin posts

Putin – and her senator father who backs him to the hilt – should face justice for the war, she says, while arguing Russia’s political illiberalism is a consequence of authoritarianism in the family with the country’s despots being products of childhood humiliation.

‘Inside of every cruel person, there’s an unhappy child who’s afraid to admit his weakness, his vulnerability, and his needs.

‘At some point in his childhood, someone was cruel to him and it was painful…

‘Naturally, Putin should be held accountable, but that doesn’t mean we just shoot him.

She warned of ‘fanatical patriotism’ in Russia and ‘weak-willed submission’ of people to the authorities. 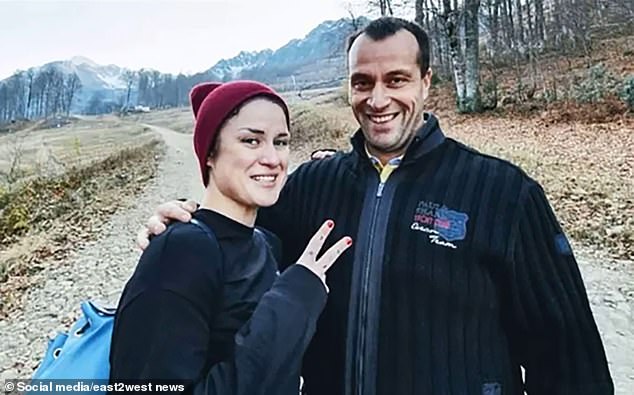 The 25-year-old staged a ‘brave’ protest in Sochi which led to her rapid arrest, and now claims Putin embodies ‘cruelty, arrogance, and impunity’. Pictured: Diana with her father in happier times 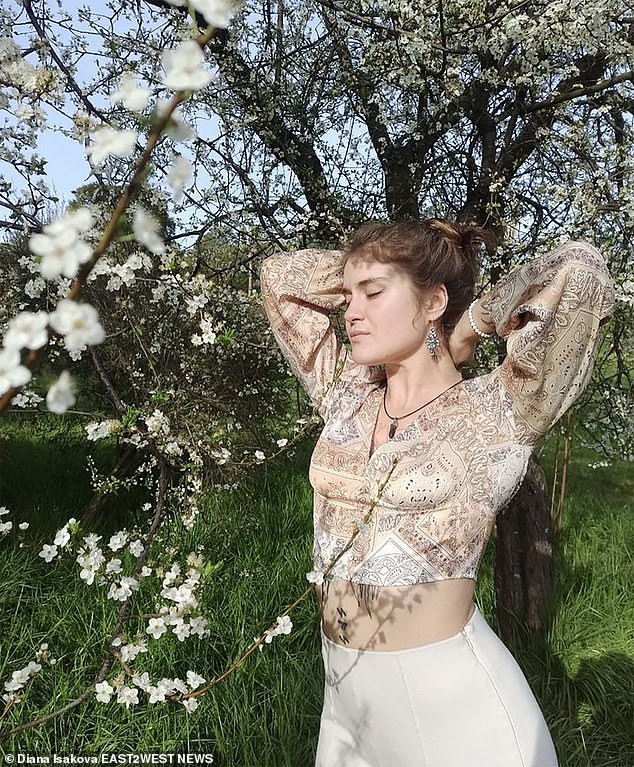 Diana, pictured, has fled Russia and is in now in Georgia as she feared persecution and jail in Russia after her social media posts

Diana has now taken sanctuary in Georgia as her father – a professional powerlifter before becoming a politician in the Federation Council, Russia’s upper house – continues to attack her for opposing Putin and his bloody war in Ukraine.

‘I’m afraid of persecution, I’m afraid to be jailed,’ she said.

‘I wouldn’t say that I’m just terribly afraid of prison or something.

‘But I think I can do more good not in prison.’

Her father said of her: ‘She’s taking a stand against the execution of the special military operation, against her own country’s policy.

‘In other words, she sold out her father, her family, her Motherland, and left Russia.

‘It’s difficult to find words for when your daughter turns out to be a traitor.’

He posted: ‘She did not just oppose a special military operation, she secretly engaged in opposition activities behind my back, living in my house, at my expense, realising that I work for federal authorities.’ 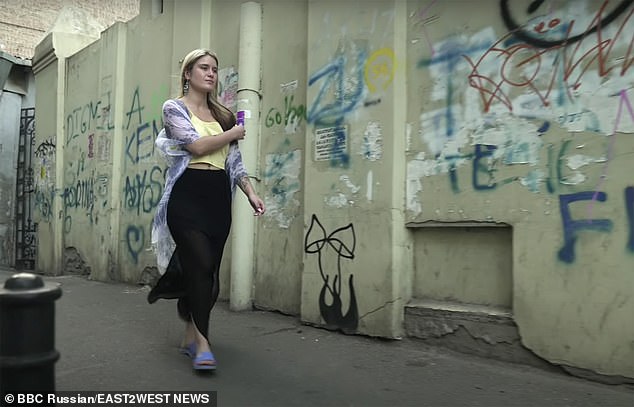 Her father said that Diana, pictured, should return to Russia and be sent to the Donbas as a volunteer to ‘learn firsthand the reasons for the special military operation’

She ‘admitted that she went to opposition rallies, single pickets, protesting the activities of the government’ and ‘organised her own action calling for the overthrow of the government [and] printed illegal leaflets in my house’.

The ranting senator said: ‘When she was detained, she was frightened and said that as a senator’s daughter they had no right to touch her…

‘She is not 15 years old, she has not been a teenager for a long time, she is 25 years old, this is an adult who, confessing her love to me, opposed me. ‘

He claimed Diana, the eldest of his four children, had gone off the rails because he had not been ever present in her life when she was younger.

‘I’m not denying my responsibility for how my child was raised,’ he said.

‘This is my daughter and my pain.’

She should return to Russia and be sent to the Donbas as a volunteer in order to ‘learn firsthand the reasons for the special military operation’. 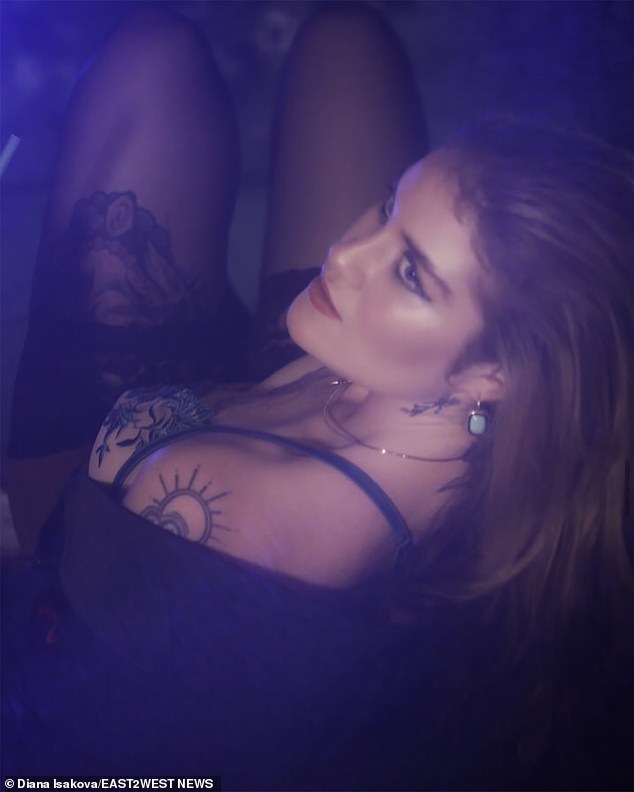 The 25-year-old’s father has bemoaned his daughter’s views, wondering why his daughter ‘refuses’ to listen to him. Pictured: Diana

She complained ‘how I tyrannised my daughter, did not allow her to freely express her position, but for some reason she lived with me voluntarily and did not even think about moving out and starting an independent life.

‘At the same time, she had somewhere to move – she had been dating an adult man of my age for three years.’

He accused her of frittering away her money then begging him for financial support while failing to get a proper profession, and dropping out of higher education.

‘What is my mistake as a father? Why does my daughter refuse to listen to me?

‘Does she think I’m cruel? Perhaps, indeed, I did not pay enough attention to her as a child [because] at that time I performed as a professional athlete.’ 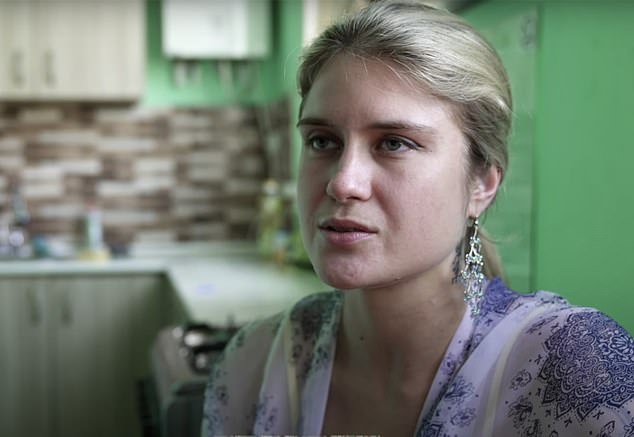 Diana, pictured, says that Putin should face justice for the war in Ukraine but says that there is a ‘cult of cruelty’ in Russia and that if he leaves, ‘something will change’ but ‘not very much’

Diana said: ‘I believe that Putin is not the main problem.

‘If Putin leaves, something will change, but not very much, because the root of the problem is that [in my opinion] the tyrant is attracted by the victim.

‘There is a cult of cruelty, tolerance of violence between people, between children.

‘Most likely, our entire political system consists of people who have experienced violence in childhood, have developed tolerance for it and a feeling that it is impossible to live in this world in any other way – only through power, through manipulation, force, fear, suppression.’