EXPRESS INFORMER > News & Politics > Daughter, 49, is charged with shooting elderly parents in the head then dismembering their bodies

A daughter shot her parents in the head before using a chainsaw to dismember their bodies and partly stuff the parts in to trash cans, authorities said Wednesday.

On Tuesday evening, the couple’s son, Justin Beck, drove past his parents’ house, having not spoken to them in person or on the phone since January 7. The lights were off, but when he returned later that evening he found his sister, Verity Beck, who also lived there, and his father’s body.

When police arrived later on Tuesday night, they found the badly decomposing bodies of Reid Beck, 73, and Miriam Beck, 72. Police discovered a pillow that had been hit with bullets, noting that this most likely indicated it was placed across the parents’ faces before they were shot at close range and then savagely mutilated.

Verity Beck, 49, from Pennsylvania, was charged with two counts of first-degree murder, two counts of third-degree murder and other crimes in the killings of the elderly couple, Montgomery County District Attorney Kevin Steele told reporters.

Verity appeared in court Wednesday for a preliminary arraignment and was ordered held without bail, criminal court records show. Authorities have not yet found a possible motive. However, investigators discovered a safe that someone appeared to have tried to break into in the house, Steele said.

On Tuesday, at around 8 pm, Justin drove past his parents’ house along the 1100 block of Beverly Road in the Jenkintown section of Abington Township, NBC10 Philadelphia reports.

He later told investigators that while he had received texts from his parents over the last ten days, he had not had any other contact with them since January 7, even though he generally spoke with his mother every day, the media outlet added.

Justin saw that his parents’ vehicles were parked outside the property and all the lights inside were off. He then returned to his home and brought soup for his sister, Verity, who lived in the Jenkintown residence with their parents, because she had complained about being ill, NBC10 Philadelphia reports.

The man returned to his parents’ home at around 9:30 pm and entered the property.

In a downstairs bedroom he discovered a body on the floor covered by a bloodstained sheet, according to the criminal complaint.

He assumed that the feet sticking out from the blanket belonged to his father.

Investigators said Justin then called for Verity, who met him in the living room.

During a half-hour conversation, Verity told her brother that things at her home had ‘been bad,’ according to the criminal complaint.

When her brother said that they needed to contact the police, Verity said she needed ‘more time,’ according to investigators. 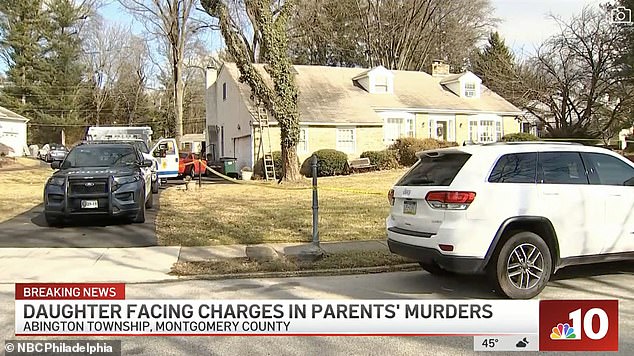 Reid Beck, 73, and Miriam Beck, 72, were found at their Jenkintown home, where Verity Black also lived

Justin, who was aware that his sister owned a handgun, then left the property, returned to his own home and phoned the police, according to the criminal complaint.

Abington Police arrived at the house at around 10:30 pm on Tuesday and saw that the lights were on inside. They attempted to make contact with Verity at the front door but she did not respond, according to the criminal complaint.

More police units then arrived and set up a perimeter around the property.

Police then sent a small remote-controlled robot into the first floor of the home to find Verity, as well as a drone to look into the second-floor windows. However, they still could not locate Verity at that point.

Shortly after midnight, three officers entered the residence, to a strong odor inside.

The officers announced they were inside the building and Verity approached them shortly afterwards, investigators said.

‘Where are your parents?’ one of the officers asked, according to the criminal complaint.

Police then handcuffed the 49-year-old and took her away from the house.

The officers then discovered a human foot inside the home with a blanket covering the rest of the body, investigators said.

They also found a chainsaw near the body, blood on the inside of a bedroom door and two trash cans in the bedroom, according to the criminal complaint.

One trash can was empty while the other was heavy.

Inside the trash the officers found a white linen covering something. The house was then secured and a search warrant was issued.

Montgomery County detectives then found the body of a decapitated man wrapped in a comforter while processing the crime scene.

They also found a furniture dolly partially underneath the body that investigators believe had been used to move the body.

The detectives found a 55-gallon trash can nearby filled with trash bags with body parts inside, according to the criminal complaint.

Detectives also discovered a pillow that appeared to have been hit by bullets, as well as a chainsaw, and more body parts inside a trash can in the garage.

Investigators also found unread newspapers from January 7, 2023. This was the date when their son had last heard his mother’s voice. 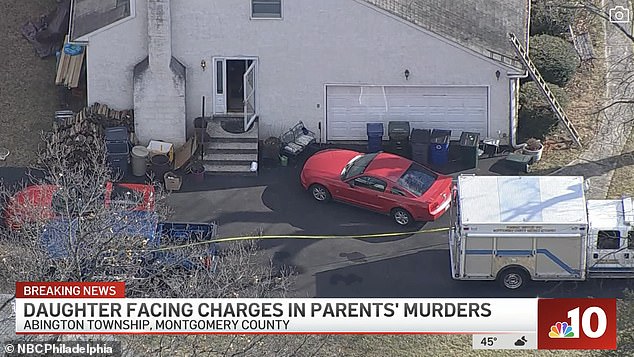 Abington Police arrived at the house at around 10:30 pm on Tuesday. Shortly after midnight, three officers entered the residence

Detectives also found a safe with drill marks on it mounted on the wall of a second-floor bedroom with tools nearby. This indicates that a person without the key or combination had been trying to enter the safe, according to the criminal complaint.

Investigators also searched through Verity’s bedroom, where they say they found three guns with spent rounds, two of which were registered to her and one of which had no record of ownership.

Later on Wednesday, a forensic pathologist identified the dismembered bodies found inside the property as that of Reid Beck and Miriam Beck.

Autopsies determined that they both died from single gunshot wounds to the head and their deaths were both ruled a homicide.

Based on the evidence collected, investigators concluded that Verity probably put a pillow across her parents’ faces and shot them at close range before dismembering their bodies with a chainsaw, officials said.

Verity was arrested and charged with first-degree and third-degree murder, which means that she is ineligible for bail in Montgomery County.

She is being held at the Montgomery County Correctional Facility.

‘This is somebody that is dismembering her mother and father and putting body parts in trash cans,’ Montgomery County District Attorney Kevin Steele said. ‘So clearly she’s trying to get rid of the evidence of her crime.’

Residents who knew Reid and Miriam Beck described them as a happy family who often spent summers at the beach. They were unaware of any issues happening inside the home prior to their murders.