The identity of the Darth Vader voice in the new Obi-Wan Kenobi series on Disney+ has finally been disclosed.

Darth Vader can be heard in episode three of the show, which takes place between the events of the Star Wars prequel trilogy and the original trilogy.

And now a report from TV Line has confirmed that the voice is that of James Earl Jones, who has performed the role since the original Star Wars film in 1977.

Cat’s out of the bag: The identity of the Darth Vader voice in the new Obi-Wan Kenobi series has been disclosed; Vader is pictured in a 1977 publicity shot for the original Star Wars 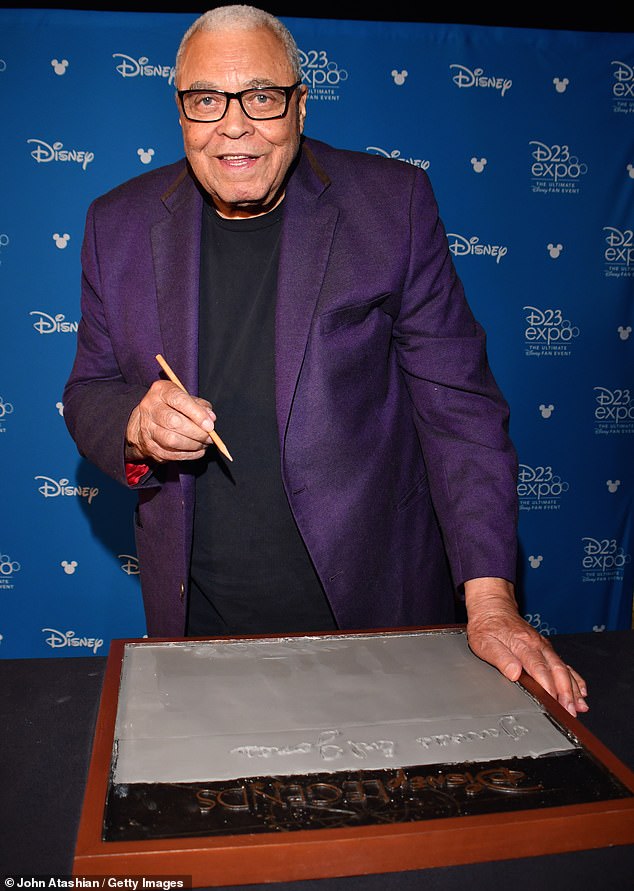 Legend: And now a report from TV Line has confirmed that the voice is that of James Earl Jones, who is pictured leaving a cement handprint at a Disney event in 2019

James, who celebrated his 90th birthday last year, continued lending his talents to the part of Darth Vader throughout the original trilogy, which ended in 1983.

He briefly returned to the role for the final instalment of the prequel trilogy, Star Wars Episode III: Revenge Of The Sith, released in 2005.

James then voiced Darth Vader in the last movie in the new sequel trilogy, the 2019 film Star Wars Episode IX: The Rise Of Skywalker.

Between trilogies, he could be heard in the role in the critically acclaimed 2016 spin-off film Rogue One: A Star Wars Story. 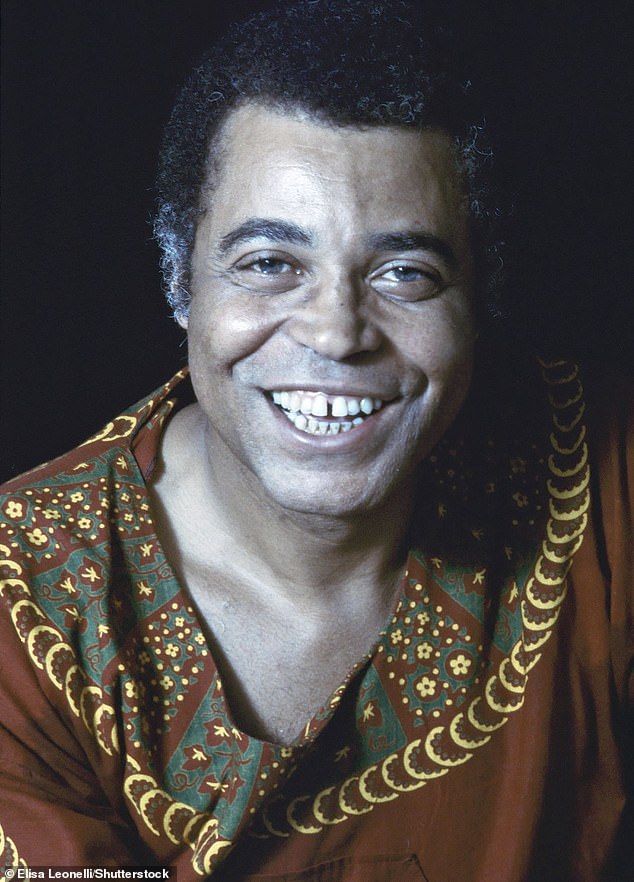 Throwback: James, who celebrated his 90th birthday last year, is pictured in 1977, the year he first voiced Darth Vader in the original Star Wars film

Darth Vader is the corrupted, villainous form of the onetime Jedi war hero previously known as Anakin Skywalker, the ‘Chosen One.’

Although James did the voice acting for the role, the actor inside the Darth Vader costume doing the physical movements was always someone else.

For example David Prowse was inside the iconic black uniform in the original trilogy, while Hayden Christensen – who played Anakin for the second two films in the prequel trilogy – put on the Darth Vader costume in Episode III.

Because of James Earl Jones’ age and the relatively few acting jobs he takes nowadays, it was not an absolute certainty he would work on the current show. 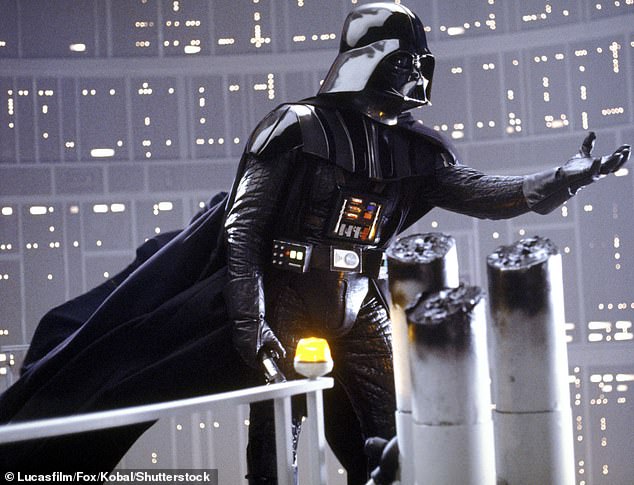 Details: Although James did the voice acting, the actor inside the Darth Vader costume was David Prowse in the original trilogy; its second instalment The Empire Strikes Back is pictured 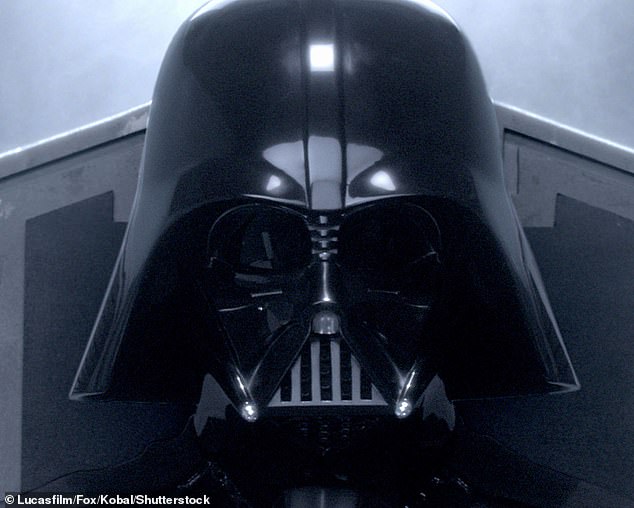 Back to 2005: Meanwhile Hayden Christensen – who played Anakin for the second two films in the prequel trilogy – put on the Darth Vader costume in Episode III (pictured)

His casting was also far from a foregone conclusion because other actors, Scott Lawrence and Matt Sloan, have voiced the role in other projects before.

Obi-Wan Kenobi is the name of the Jedi who serves as Anakin Skywalker’s mentor in the prequel trilogy, only to watch in horror as his apprentice turns to the Dark Side.

In Revenge Of The Sith, Anakin and his new evil Sith master Emperor Palpatine seize control of the galaxy’s government and exterminate the Jedi.

Obi-Wan winds up one of the only two Jedi to survive, along with Yoda, the wizened old master memorably played by puppeteer Frank Oz. Feted: James, who has enjoyed a distinguished career on the stage and screen for decades, is pictured accepting a lifetime achievement Tony in 2017 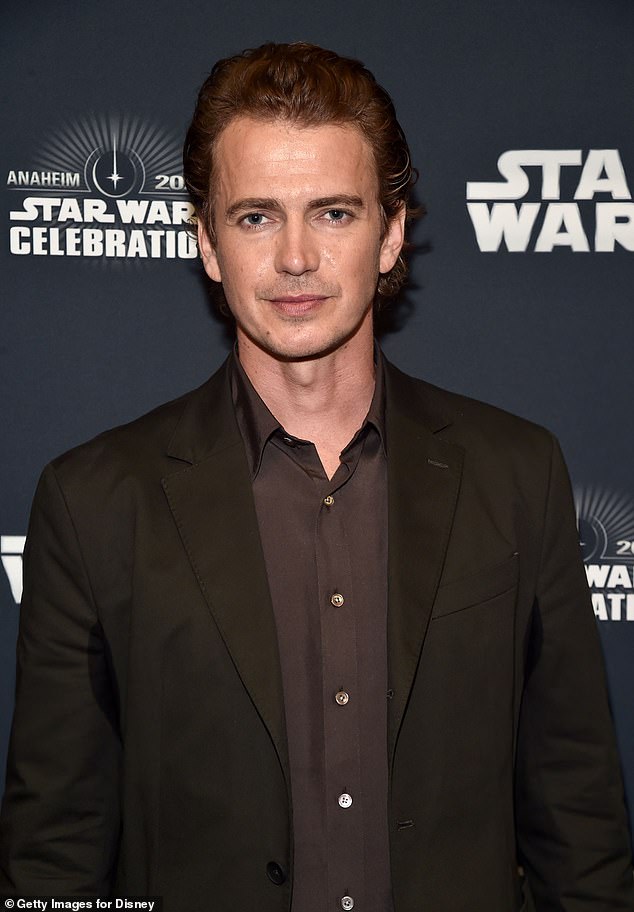 The actor: Hayden Christensen played Anakin Skywalker in the prequels and has returned for the Obi-Wan series; seen in May

By the time of the original trilogy, Obi-Wan is an old man played by Alec Guinness, living in hiding as ‘Ben Kenobi’ on the desert planet of Tattooine.

Ben has secretly been keeping a watch on Anakin’s son Luke Skywalker, whom he eventually mentors into becoming the new hero of the galaxy.

Although Ben is struck down in a battle against Darth Vader, his final apprentice Luke eventually turns Vader back to the light and helps topple the Emperor.

Obi-Wan was played in the original trilogy by Scots heartthrob Ewan McGregor, who has returned to the part for the new series on Disney+. 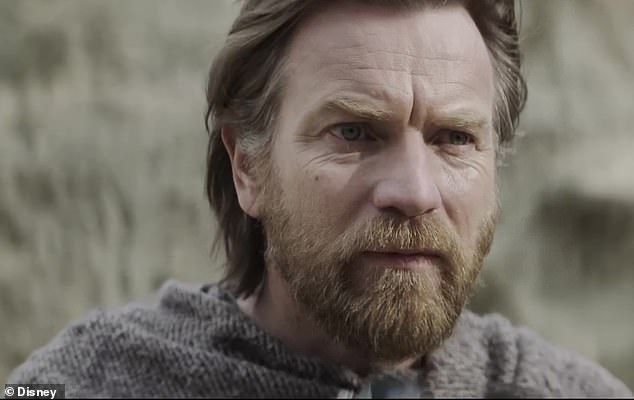 Smoldering: Obi-Wan was played in the original trilogy by Scots heartthrob Ewan McGregor, who has returned to the part for the new series on Disney+ 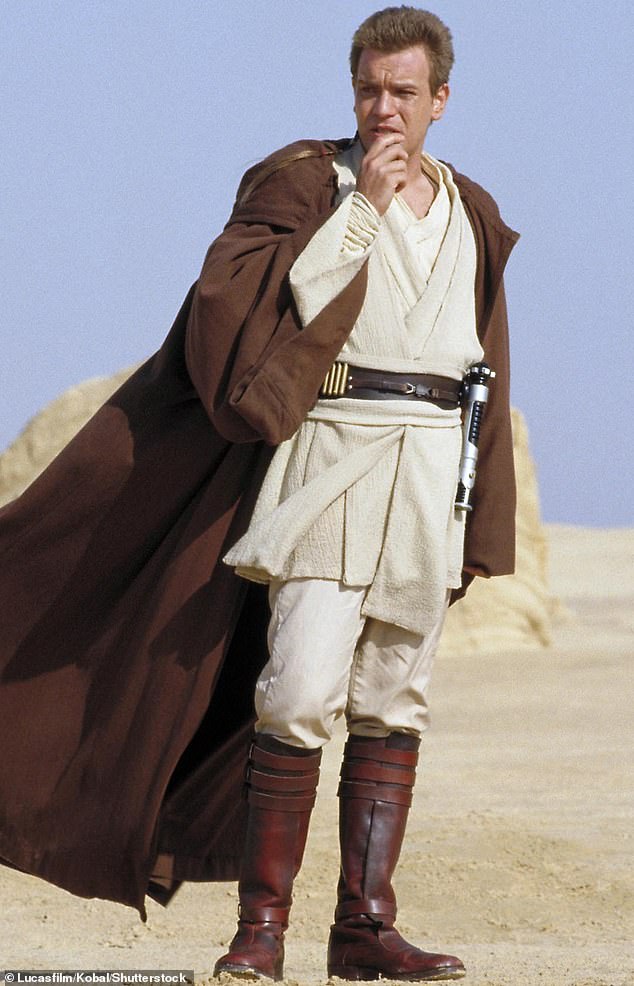 Remember when: Ewan first played Obi-Wan in Star Wars Episode I: The Phantom Menace, the first instalment of the prequel trilogy, released in 1999