Shares in Darktrace have tumbled after the cybersecurity provider revealed that takeover negotiations with American investment group Thoma Bravo had ended.

Discussions between the pair were first revealed last month, sparking significant concerns that the London Stock Exchange would lose another technology business to a private equity predator.

Following that announcement, Thoma Bravo, a specialist investor in the tech industry, was given until next Monday to make a concrete proposal or walk away.

Plummeting value: Darktrace shares were the biggest faller by some distance on the FTE 350 Index this morning, diving by 34.7 per cent to £3.36 just before 11am

Under City takeover rules, it must now wait at least six months before putting forward another offer unless another company reveals a rival bid for Darktrace.

‘Early stage discussions took place with Thoma Bravo about a possible offer for the Company, but an agreement could not be reached on the terms of a firm offer,’ Darktrace told investors.

Darktrace shares were the biggest faller by some distance on the FTE 350 this morning, diving by 30 per cent to 356.7p, meaning their value has declined by over half in the past 12 months.

This was despite the Cambridge-based group reporting impressive annual results showing it rebounding to a modest profit on the back of strong revenue growth across all markets.

The firm posted a net profit of $1.5million in the 12 months to the end of June, compared to a $145.8million loss the previous year when it incurred heavy finance costs associated with debt securities that were handed to certain investors.

Operating expenses also grew more modestly than they usually would due to Covid-related restrictions suppressing spending on travel, entertainment and facilities for much of the period. 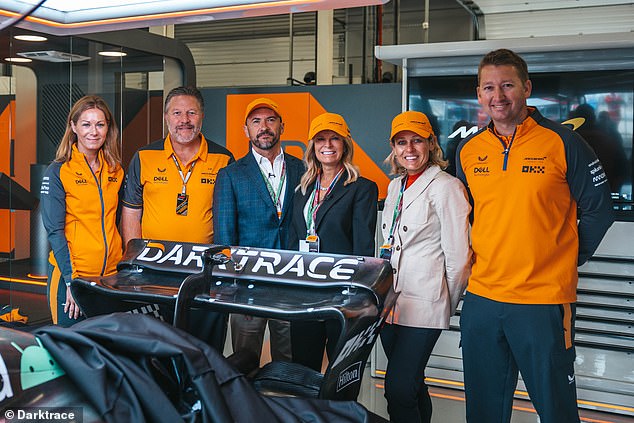 But profitability mainly benefited from total revenues jumping by 45.7 per cent to $415.5million thanks to Darktrace’s customer base expanding by around a third.

Companies that have used its services have included brewing giant ABInBev, Formula One team McLaren Racing, and civil engineer Sir Robert McAlpine, as well as the UK intelligence services.

One of its most well-known backers has been Mike Lynch, who is facing possible extradition to the US over accusations of fraud arising from the $11.6billion sale of enterprise software group Autonomy to HP.

Lynch, who has denied all the allegations, has said the ‘vindictive’ campaign by US authorities has depressed the share price of Darktrace, thereby making it more vulnerable to a takeover.

Michael Hewson, the chief market analyst at CMC Markets UK, said the breakdown of talks between Darktrace and Thoma Bravo is a ‘mixed blessing’ for London’s financial markets.

He added: ‘On the one hand, it [Darktrace] has been touted as an award-winning pioneer in the cyber-security space, a sector that is more important than ever in these testing times and the Russian invasion of Ukraine.

‘On the flip side, there are questions about its links with Autonomy owner Mike Lynch with some investors questioning how deep these links go.

‘There have also been questions about the amount of money the company spends on R&D, which it is being argued is too low for such an important sector.’