EXPRESS INFORMER > News & Politics > Dark side of Sportsbet: How company earned $550m in the pandemic and sent most money overseas

If you watch sport, it is impossible to avoid ads for the sports betting apps – with Sportsbet the biggest player of them all.

From its Elite Average Games campaign on screens, to the infamous ‘Manscaping’ ad that website Ad Standards said was the most complained about in the last decade, Sportsbet are an in-your-face brand that appears as Aussie as a kangaroo.

In 2020, it spent an estimated $139.3m on advertising and sponsorship, over $60million more than its nearest competitor, bombarding airwaves with ads that depict a larrikin Aussie image that combines humour with online punting.

That includes its integration into networks’ sport broadcasts, as program hosts throw to gambling experts (usually ex-football players such as Nathan Brown and Joel Caine) for the live odds.

Even Nick Kyrgios’ brother Christos turned into an ad for the brand at the 2018 Australian Open, for which he was reportedly paid $40,000.

Sportsbet’s ads have frequently caused a stir. In 2017, for example, an ad featuring Canadian sprinted Ben Johnson, which carried the tagline ‘Put the ‘roid in Android’, was banned by the Advertising Standards Board because it made light of the use of performance enhancing drugs in sport.

In 2020, Sportsbet spent an estimated $139.3m on advertising and sponsorship, over $60million more than its nearest competitor 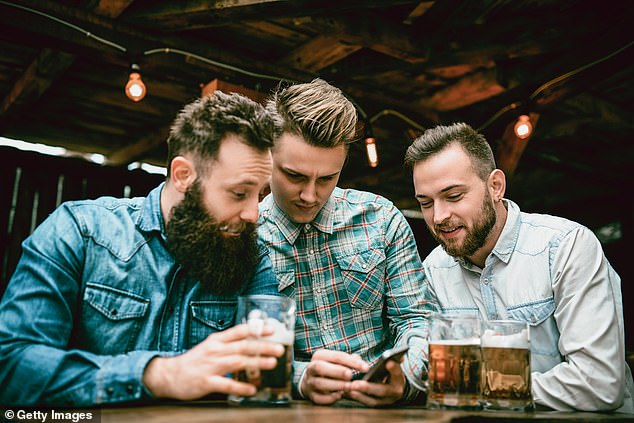 Other brands such as Ladbrokes, Bet365 and Neds have followed suit, attempting to engage new and existing punters with a blokey, humorous, entertainment-driven image.

Ladbrokes even imported Hollywood star Mark Wahlberg for its latest campaign, while NBA legend Shaquille O’Neal utters Aussie phrases such as ‘I just threw a pineapple on a roughie at Randwick’ as Australian brand ambassador for Pointsbet.

‘US sports, particularly professional basketball, continue to be the fastest-growing betting sport in Australia, and we are very excited to align with such a transcendent athlete,’ Pointsbet  co-founder Andrew Fahey said of Shaq’s signing.

‘We are passionate about being an iconic Aussie brand that’ll bring excitement to life for generations to come,’ its website states.

However Sportsbet is anything but an Australian operation.

Stephen Ferguson, the CEO of the Australian Hotels Association, an organisation that has regularly argued online betting agencies don’t operate on a level playing field, said many of the online ‘corporate bookmakers’ like Sportsbet are not what they seem.

‘It is fair to say that jokey Australian image is not the reality of the companies,’ he said.

Instead, Sportsbet is owned by Dublin-based Flutter, a $50billion betting giant listed on the London stock exchange that also owns Betfair, PokerStars, FanDuel and Paddy Power.

‘The biggest companies are domiciled offshore, they shift all their profits offshore,’ Mr Ferguson said.

‘It’s a bit of a giveaway that their licences aren’t held in the major jurisdictions where they actually take bets.

‘In the case of Australia they’re often licensed in places like Gibraltar, the Isle of Jersey, the Isle of Guernsey, the Northern Territory, Norfolk Island at one stage… none of which have much wagering product.’

Sportsbet is considered the ‘stand-out performer’ in Flutter’s global portfolio, accounting for close to a third of the outfit’s operating profit.

And yet it only employs about 700 people in Australia, representing just five per cent of its total international workforce of 14,500. While licensed in Darwin, most of its Australian staff work from headquarters in Melbourne.

Covid has accelerated the online gambling industry. Pubs and other venues closed by rolling lockdowns has presented keen gamblers with little option but to open an online account.

‘It’s been happening for a decade anyway but what Covid has done is speed up the the migration from the more traditional wagering formats to the new ones,’ an industry source said. 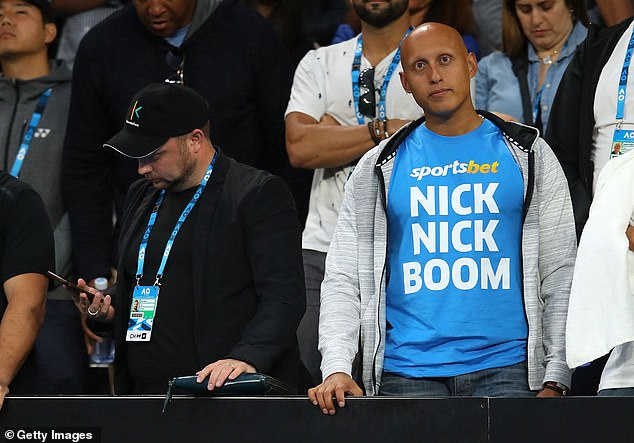 Nick Kyrgios’ brother Christos turned into an ad for the brand at the 2018 Australian Open, for which he was reportedly paid $40,000 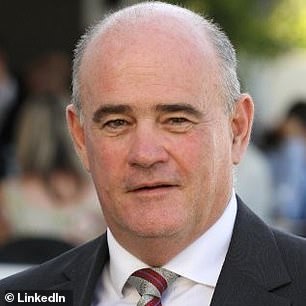 Australian Hotels Association CEO Stephen Ferguson said more beneficial tax rates for online betting agencies makes it easier for them to compete for customers. ‘They’re out after our customers and we don’t like that. It’s not a level playing field’

SportsBet is now the largest online-only betting site in Australia, building its ‘entertainment’ brand on growth in users of about 10 per cent a year.

A market presentation by the brand for investors, seen by Daily Mail Australia, claims one in four Australians aged 18-34 now has a Sportsbet account.

Operating profit grew 119 per cent to approximately A$542.6million for the year.

The healthy numbers are built on the rapid growth of online sports betting, growing 21.1 per cent over the period 2015-2020, while betting through traditional retail outlets had declined 13.6 per cent.

Christopher Hunt, a Senior Clinical Supervisor for GambleAware Central Sydney at Sydney University, said we are witnessing ‘the gamblification’ of sport through the rise of online betting.

‘Opening up the betting on sports really only happened about 20 years ago now and since that time, gambling has come to be seen as this integral part of sport,’ he said.

‘It’s almost like now you can’t talk about sport without mentioning the margins. It went from being a side thing to very much at the heart, culturally, of how young people in particular see sports.’ 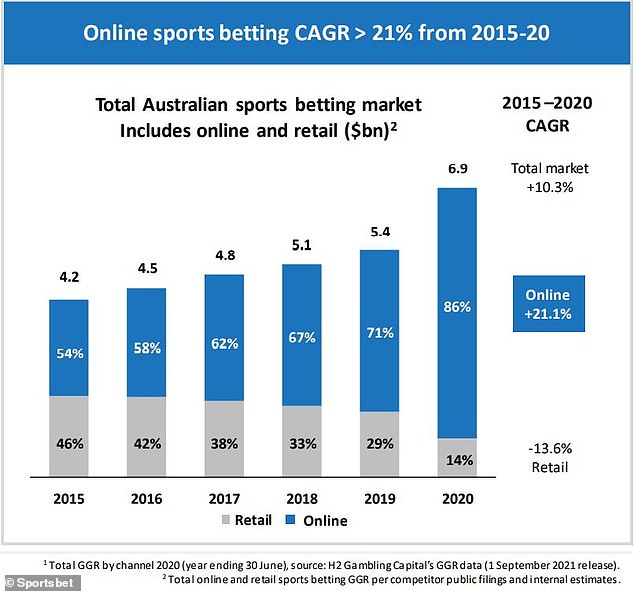 Licensed and regulated by the Northern Territory Racing Commission in Darwin, one of the complaints by retail betting outlets about Sportsbet and other online betting agencies is the Territory’s modest $1million per annual licensing fee, which is capped.

By comparison, the TAB pays licence fees in each state it operates.

‘Because of the higher tax rates that TAB pay they’re simply not able to compete with the more profitable, foreign-owned companies, who get a more beneficial tax rate,’ Mr Ferguson said.

‘It makes it far easier for them to compete for customers, and they’re out after our customers and we don’t like that. It’s not a level playing field.’

In 2019, online bookmakers were brought back to the field somewhat by the introduction of ‘point-of-consumption’ (POCT) taxes in NSW, Victoria, Western Australia and the Australian Capital Territory.

This change imposed a tax on gambling losses based on where a bet is placed, rather than where the bookmaker holds its licence. The tax rate for Sportsbet in NSW, for instance, is 10 per cent of revenue.

Taxes on other forms of gambling such as lotteries and poker machines, by comparison, are higher at 25-30 per cent.

The new tax caused the consolidation of some agencies, William Hill checking out of Australia before the impost came in and BetEasy merging with Sportsbet.

According to pub owners, punters watching the racing/sports coverage in the pub while betting on their phones leaves the venue to pay for the bulk of the broadcasting rights 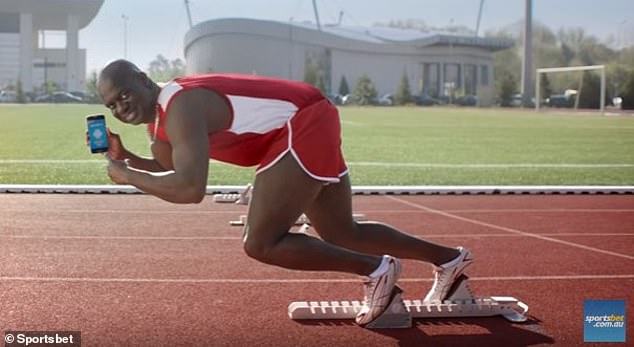 The brand’s ad featuring Canadian sprinter Ben Johnson, which carried the tagline ‘Put the ‘roid in Andriod, was banned by the Advertising Standards Board in 2017 because it made light of the use of performance enhancing drugs in sport

Responsible Wagering Australia, the peak body for a group of online agencies in Australia including Sportsbet, Unibet, Bet365 and Ladbrokes, said in a position statement that the POCT is ‘punitive’.

It counters that its members paid a combined $1.428billion in taxes and legislated fees last financial year.

Despite the new tax, Sportsbet boasts its profitability is unaffected, telling investors: ‘Sportsbet is very profitable, and that profitability continues to increase.’

‘Even in years like 2019 when we incurred $140million in additional POC taxes, profitability didn’t decline because of the scale of the business and the flywheel effect that we’ve been able to implement.’

Drinking at the pub, but punting on the phone

The AHA argues that online outfits like Sportsbet do not pay enough for the racing coverage which is its lifeblood.

Campaigns such as the brand’s ‘Bet With Mates’ aims to take advantage of the ‘cultural phenomena of group betting – especially in pubs,’ a Sportsbet presentation states.

According to pub owners, however, watching the coverage in the pub while betting on their phones leaves the venue to pay for the bulk of the broadcasting rights.

‘The frustration for pubs is they pay for the bulk of the vision on Sky Channel,’ Mr Ferguson said.

‘What happens is that many people sitting in a pub are betting with one of the [online] corporates, they’re not betting with the TAB and aren’t making any contribution to the cost of the vision, which goes to underwrite horse-racing.

‘A dollar spent with a pub TAB generates about twice as much benefit for the racing industry, hospitals and schools than a dollar spent with an overseas-owned corporate bookmaker who’s shovelling the profits back to Dublin or Gibraltar or wherever else they’re owned,’ he said.

The online wagering industry counters that the cost of the coverage is overly expensive for licensed venues.

Sportsbet did not wish to comment on its Australian operations and the relationship with Flutter.

‘More and more people are shifting to online betting and these companies continue to crow about massive profits but I say again, instead of profits and investments staying in Australia and circulating in Australia, paying for schools, hospitals and the racing industry, it just means more money goes offshore,’ Mr Ferguson said.