Danny Mills is broadcast saying ‘basically, United are s***’, LIVE on Sky Sports, with ex-Leeds and Man City star airing his REAL views on the Old Trafford crisis while show was meant to be on an ad break

Danny Mills has delivered one of the all-time great TV gaffes, offering his unfiltered verdict on Manchester United’s woes when he thought the cameras had stopped rolling.

Sinking back in his chair, Graves, who had been discussing United’s ongoing issues and Ole Gunnar Solskjaer’s precarious position as manager, said: ‘Great chat lads, well done, that was really interesting.

Mills was appearing on the broadcast along with Sol Bamba and both men were pictured either side of Graves on video link.

With his head down and earphones in, Mills responded to the presenter’s congratulations for the interesting conversation with his simple assessment that United ‘are s***’.

Both Bamba and Graves laughed at the comment and then Mills shrugged his shoulders, saying: ‘But they are..’

Fast-thinking viewers watching from home took to social media with a recording of the clip. 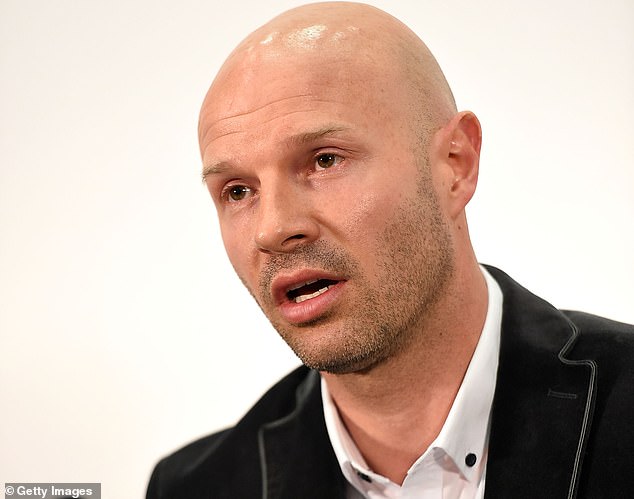 United have been the talk of football since their 5-0 demolition at the hands of fierce rivals Liverpool at Old Trafford.

Many have been calling for Solskjaer to be sacked, but the manager is going to be given a chance to turn things around.

Mills and Bamba had been reflecting eloquently on the situation at the club before what they, and Graves, thought was a break in the live coverage.

The contrast in Mills’ succinct verdict when he thought he was able to speak freely made the howler even more entertaining.

It seems the error came on the Sky Sports Premier League channel where coverage had continued, when on Sky Sports News, the advert break was in progress.

The broadcaster issued an apology upon returning from the adverts.