As Daniel Ricciardo prepares to go back to where his F1 career began at Red Bull, the Aussie star has revealed he was suffering from burnout and was ‘glad’ no one offered him a starting spot on the grid for 2023.

Lean results and issues with his vehicle punctuated his two-year stint at McLaren which ultimately led to him being replaced by fellow Aussie Oscar Piastri for 2023 despite having a year left to run on his contract.

The 33-year-old’s career reached a crossroads after stuttering performances with McLaren and Renault before that, before his original team Red Bull came to the rescue.

Ricciardo will take up a reserve driver position at the manufacturer, sharing the role with Kiwi young gun Liam Lawson along with doing promotional work for Red Bull.

It came after the Aussie declined potential opportunities to race with lower-ranked teams like Haas, Williams and Alfa Romeo while he was also linked to starting positions with Red Bull, Mercedes and Ferrari.

Ricciardo was initially going to take a year away from the sport and has now revealed that he was suffering burnout and needs time away from the pressures of a top-two spot at a leading manufacturer.

‘There was a couple of times where [Ferrari] was linked. Guenther (Steiner, Haas team principal) reached out,’ Ricciardo told the Beyond the Grid podcast.

‘The more … days that passed and, especially as I did the triple-header to get back into the second half of the season – so three races on the bounce – it became more and more clear that it wasn’t about what phone call I was receiving; it was about me acknowledging that I just ultimately don’t want to be competing next year.

‘So, in a way I am glad that, let’s say, a top team didn’t reach out, because it’s one of those ones where you probably feel, ‘Oh, I’ve got to sign it’, but I think deep down I was just craving a bit of distance.’

Ricciardo admitted that his fatigue was not going to vanish through hard work and that time and space was needed to find his mojo again.

‘You could call it some burnout, but I’m not afraid to admit that or say that,’ he said.

‘And it’s one of those ones where everyone will have an opinion and this and that, but it’s ultimately that I know what I feel, I know what I want. It was some of that.

‘And I feel very … I don’t want to say that I’m the only driver that feels this way, but I would say that I’m not the normal sportsman where I kind of just use ‘practice makes perfect’. 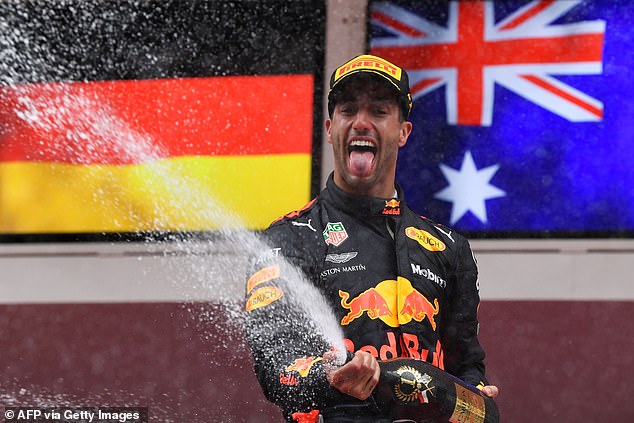 Ricciardo celebrates winning the Monaco Formula 1 Grand Prix in 2018 with Red Bull. He has returned to Red Bull in 2023 as a reserve driver

‘The more I do sometimes, the more I’m just like getting kind of lost in it, where I kind of feel like the power of a break for me, some time off, I could come back better. I know for me that could actually be really good.’

Fans could yet get to see Ricciardo race in 2023 though, should anything happen to Max Verstappen or Sergio Perez.

Ricciardo is hopeful of returning to a top position in 2024, although spots may be at a premium with the likes of Verstappen, Perez, Charles Leclerc and Carlos Sainz [Ferrari] and George Russell and Lewis Hamilton [Mercedes] intent on racing on.