Aussie F1 racer Daniel Ricciardo has stood up for seven-time world champion driver Lewis Hamilton after Red Bull boss Christian Horner claimed the British star was having a ‘b**ch’ about his back pain in order to bring about a rule change that would help his team.

Hamilton suffered severe back pain due to his Mercedes ‘porpoising’ – or bouncing at high speed – in last weekend’s Azerbaijan Grand Prix, leading to his call for a rule change to combat the problem.

Lewis Hamilton clutches at his lower back after finishing fourth in the Azerbaijan GP, telling his Mercedes team to ‘make some changes’

After finishing fourth in Baku, Hamilton revealed he struggled to complete the race and had to ‘bite down on his teeth’ to deal with the pain caused by his car banging up and down.

Red Bull principal Christian Horner said his team had not been affected by the problem and believes Mercedes should deal with it instead of calling for new regulations.

‘Tell them to b**** as much as they could over the radio and make as big an issue out of it as they possibly could. It is part of the game,’ the 48-year-old said.

‘Look, it is uncomfortable but there are remedies to that, but it is detrimental to the car’s performance.

‘What is the easiest thing to do? Complain from a safety point of view but each team has a choice. If it was a genuine safety concern across the whole grid, then it is something that should be looked at.’

Aussie Daniel Ricciardo, who finished eighth at Baku in his best result of the season, disagreed with his old Red Bull boss and said Hamilton shouldn’t be doubted.

‘There was talk about Lewis after the race. I saw some of his on-boards, I saw pictures of him getting out of the car and stretching his back, and he wasn’t exaggerating,’ the McLaren driver said.

‘The position we sit in the car, we don’t have much room to move so we are not prepared for the impacts.

‘If that is up to a rule change, or the way the teams are setting up the cars, I am not 100 per cent sure. But I wouldn’t like anyone to go through any unnecessary injury or pain.’ 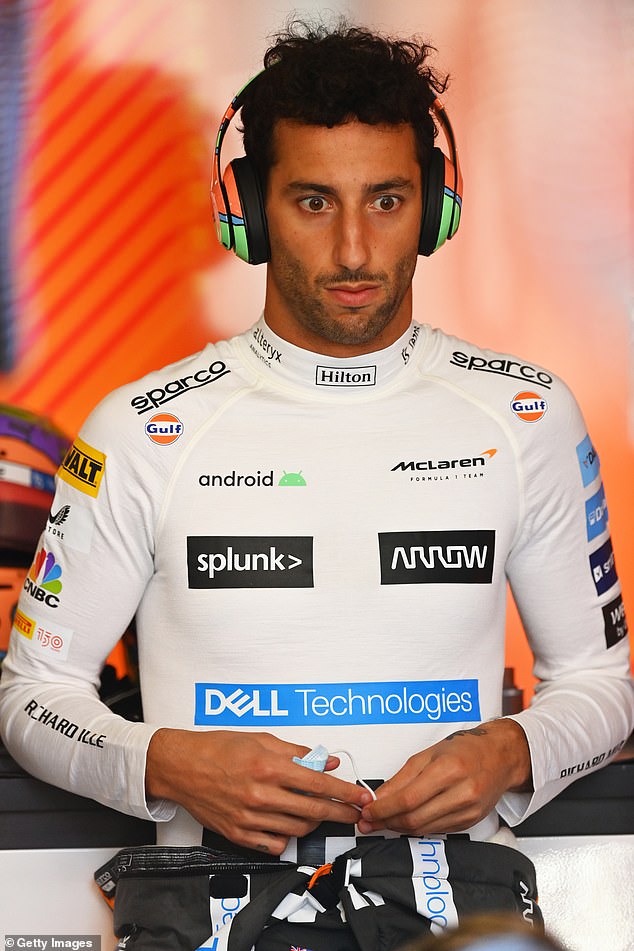 Far-reaching changes to the rules for the 2022 season saw teams forced to rely far more on ground effect aerodynamics to gain downforce.

The changes were brought in to encourage overtaking by reducing the amount of ‘dirty air’ behind cars, which makes it difficult for drivers to get close to the vehicle in front.

Mercedes have struggled under the new regulations, and Ricciardo said while his team have dealt well with the changes, he feels for drivers who have to endure porpoising.

The 32-year-old said the pain is like when ‘pro basketball players bounce the ball really low, that’s what it felt like someone was doing to my helmet’.

Following a consultation with its doctors, the FIA decided to introduce measures to lessen the severity of porpoising, even though teams such as field-leading Red Bull and Ferrari appear to be relatively unaffected by it. 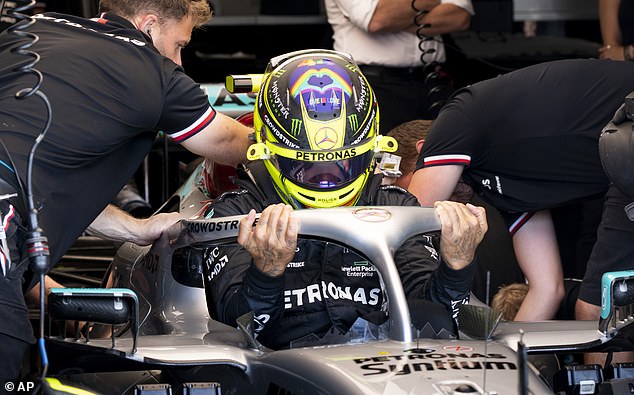 Lewis Hamilton pushes himself into his Mercedes car during first practice of the Canadian Grand Prix, where back troubles continued and he finished 13th in practice two

Mercedes F1 CEO Toto Wolff apologised to Hamilton after his Baku performance, saying, ‘We all know that this is a bit of a s***box to drive at the moment.’

Hamilton finished 13th in second practice for the Canadian Grand Prix on Saturday and has labelled his Mercedes ‘undriveable’.