EXPRESS INFORMER > ShowBiz & TV > Daniel Kaluuya cuts a dapper figure in a blue suit at Amazon’s All or Nothing: Arsenal premiere

Daniel Kaluuya cut a dapper figure as he attended the All or Nothing: Arsenal premiere in Central London on Tuesday.

The actor, 33, donned a smart royal blue suit for the occasion which he layered over a simple black t-shirt.

Daniel appeared in high spirits as he hit the red carpet at Islington’s Assembly Hall, completing the look with a pair of dark shades.

Snazzy: Daniel Kaluuya, 33, cuts a dapper figure in a royal blue suit and shades as he attended the All or Nothing premiere in London on Tuesday

The Oscar-winner slipped his feet into patent Chelsea boots as he sported a neatly trimmed goatee.

The Amazon series looks at Arsenal’s 2021/22 season and gives fans ‘ unprecedented coverage’ of manager Mikel Arteta and his team at the Emirates Stadium.

This is the show’s third season after following fellow Premier League Manchester City in 2018 and Tottenham Hotspur in 2020. 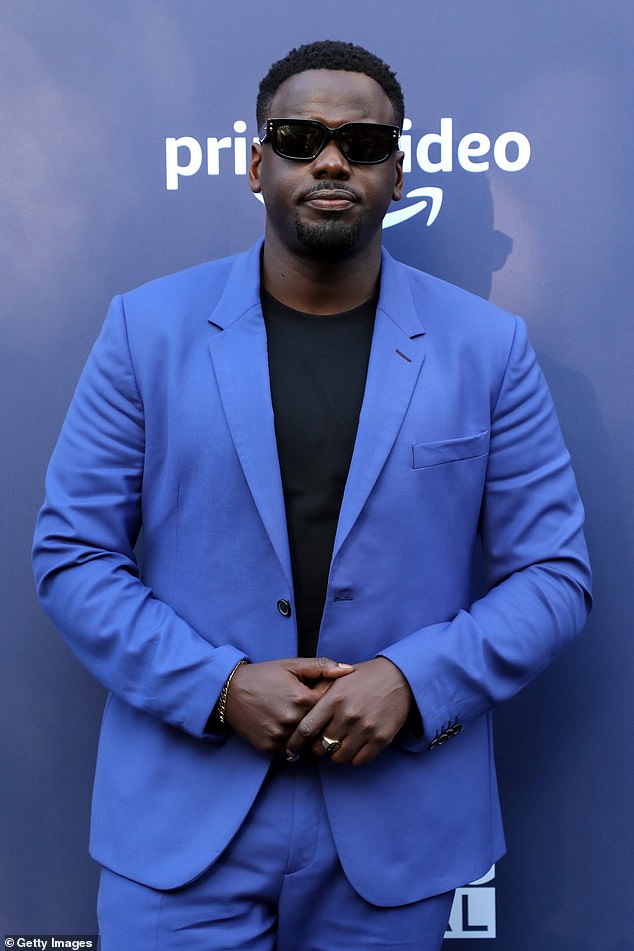 VIP: Daniel appeared in high spirits as he hit the red carpet at Islington’s Assembly Hall, completing the look with a pair of dark shades

Handsome: The Oscar-winner slipped his feet into patent Chelsea boots as he sported a neatly trimmed goatee 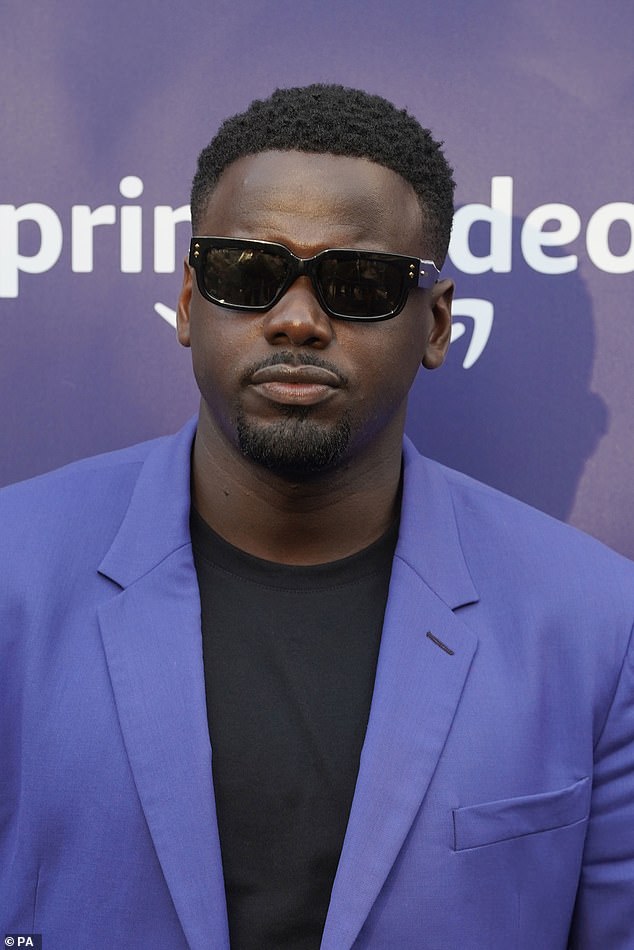 Also on the red carpet was radio host Roman Kemp, 29, who made his loyalties clear as he held open his jacket to reveal an Arsenal shirt.

The television personality wore a pin stripped tracksuit for the occasion which he teamed with dark trainers.

The series will likely prove to be a tough watch for the fanbase after their side missed out on Champions League football, despite them looking on course to finish in fourth spot. 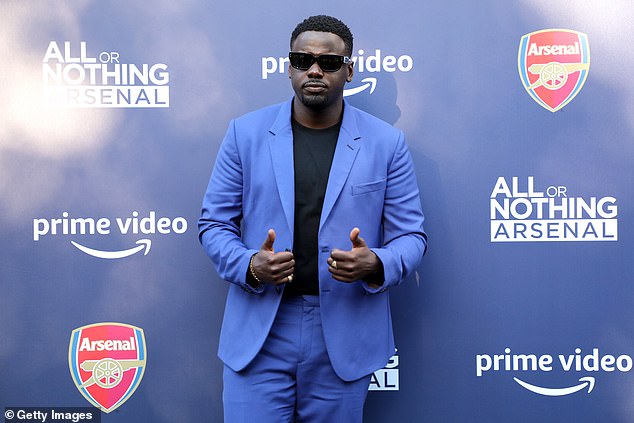 Thumbs up: Daniel gave the thumbs up to the crowd of fans that had surrounded the swanky venue 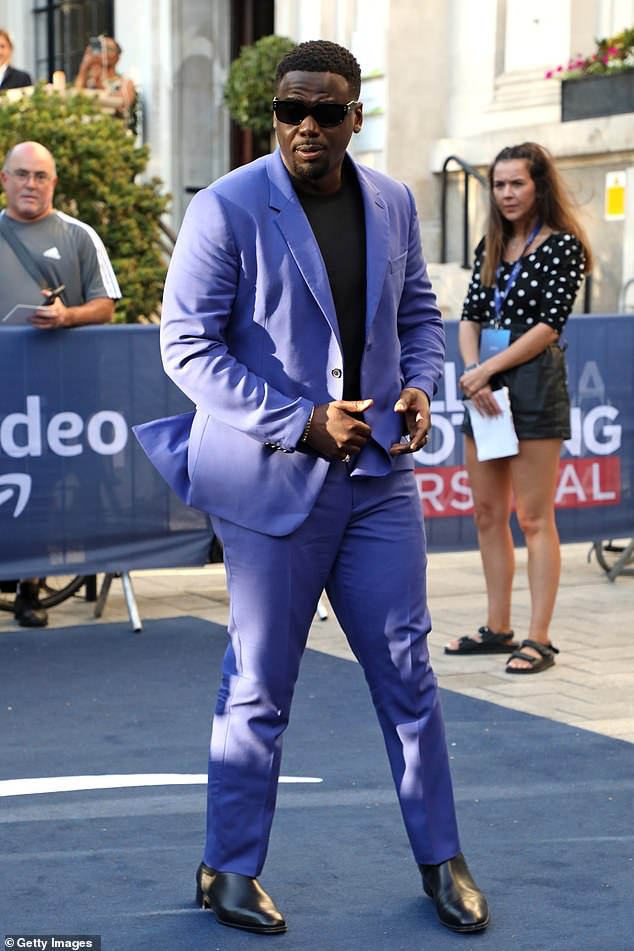 007: Daniel was quite the cool customer as he made his way inside 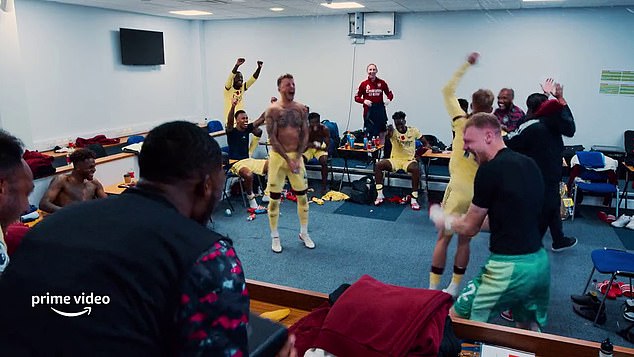 The fly-on-the-wall documentary will be released on August 4.

Judging from trailer, which focuses on the club’s winless start to the season, many of the episodes will focus heavily around Mikel Arteta and his decisions.

Boss Arteta came under fire after Arsenal were beaten by Brentford, Chelsea and Manchester City in their opening three league games, before their form recovered. 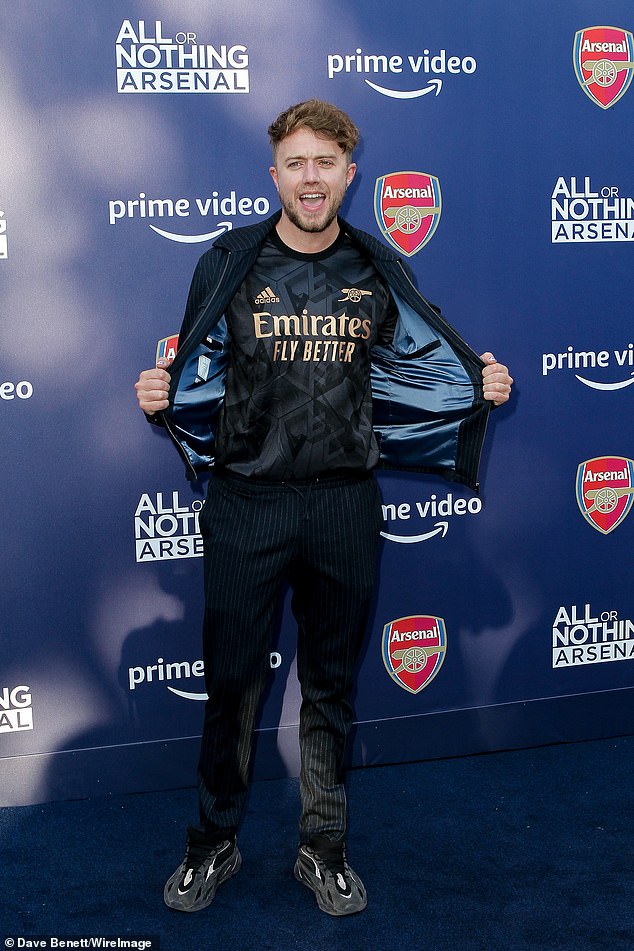 Big fan: Also on the red carpet was radio host Roman Kemp, 29, who made his loyalties clear as he held open his jacket to reveal an Arsenal shirt 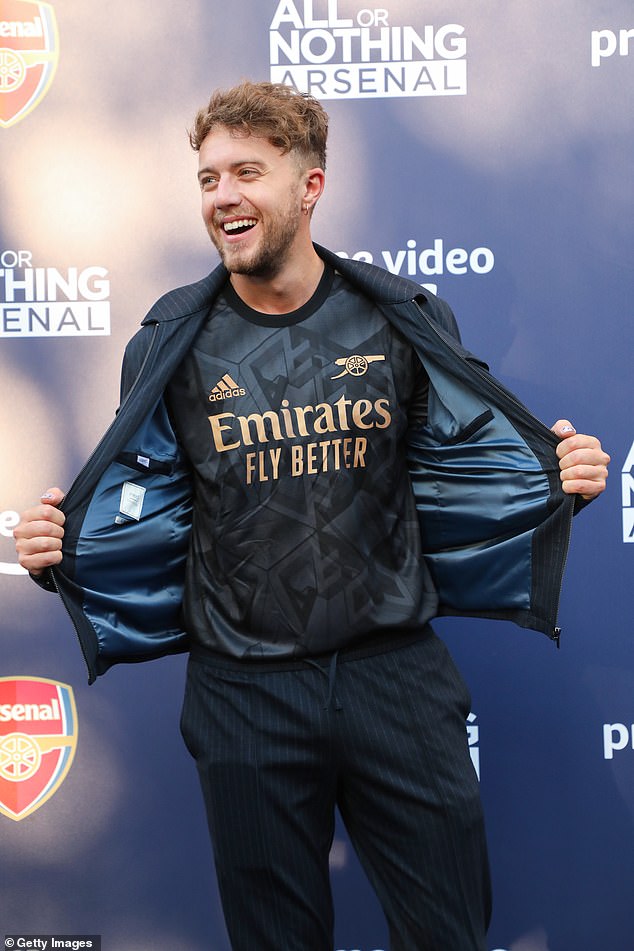 Football mad: The television personality wore a pin stripped tracksuit for the occasion which he teamed with dark trainers 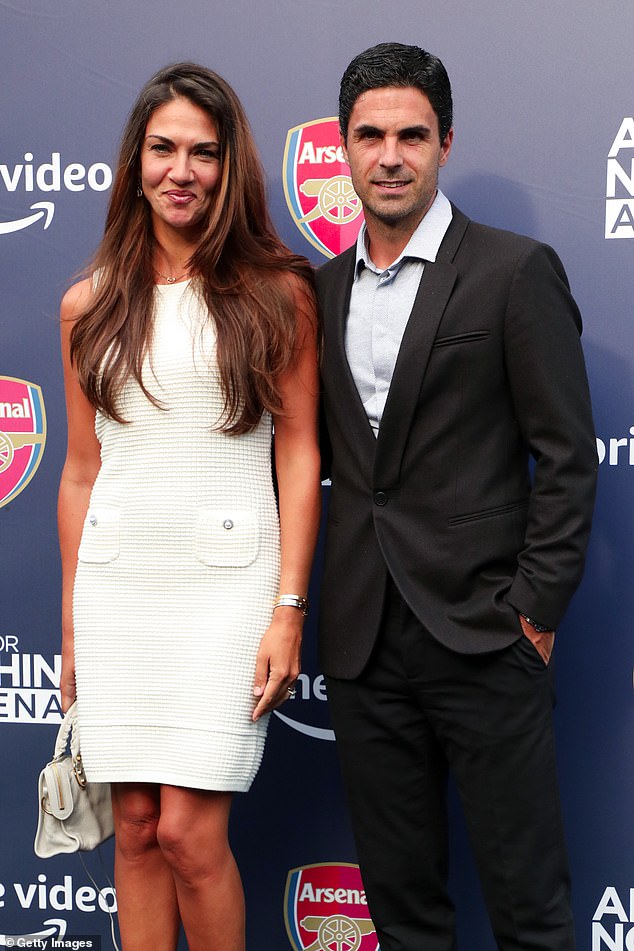 Lovebirds: Arsenal manager Mikel Arteta was joined at the event by his leggy wife Lorena Bernal

The start of the trailer shows him standing forlornly on the touchline, with audio taken from him telling his players they were bottom of the league overlaid on top.

Fans then lambast their ‘relegation form’, before Aaron Ramsdale is seen declaring a performance ’embarrassing’ and throwing an object in the dressing room.

However, after the downbeat start, Arteta is then filmed giving a rallying cry to his squad, with a picture showing a pack of wolves and the Arsenal flag on the screen. 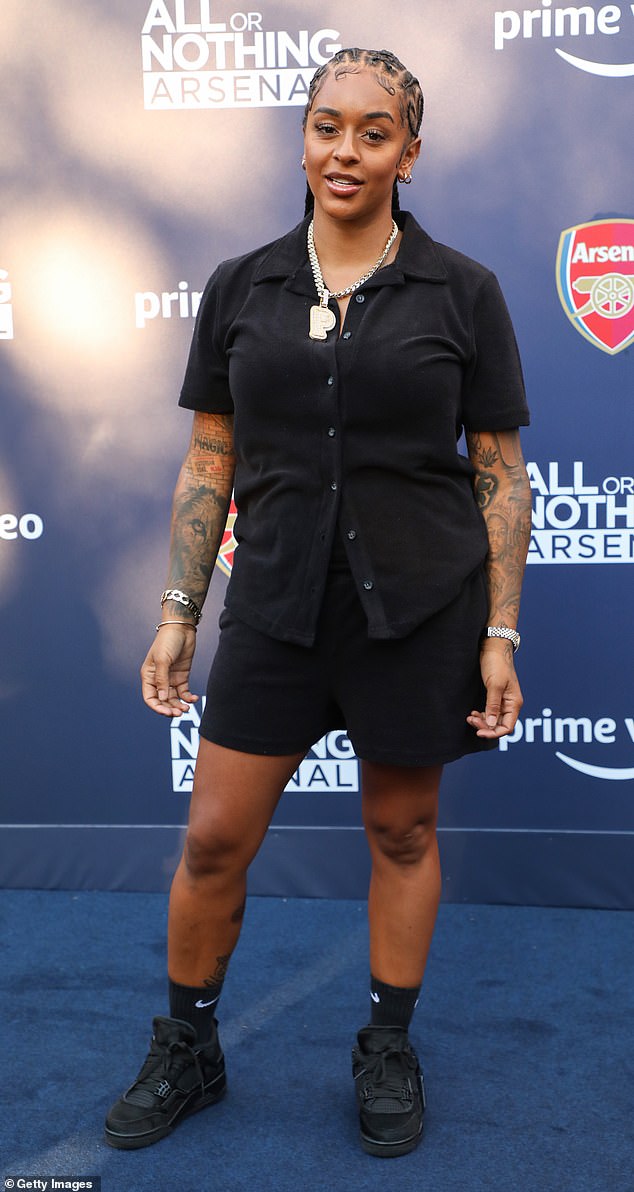 Stylish: Singer Paigey Cakey cut a stylish figure in an all black ensemble

Back in action: David Seaman (right) who famously played for the team was joined by wife Frankie Poultney

The series is also expected to cover a number of other key events, including Pierre-Emerick Aubameyang’s departure after the striker was stripped of the captaincy.

He left in the winter window, joining Barcelona for free, and the shattering of the relationship between the player and the club is likely to make for fascinating viewing.

Arteta previously revealed it was not his decision to allow the filming to take place.

‘That’s a decision made from the club and it is with the best possible interests for the football club. We need to help as much as possible,’ he said in August 2021. 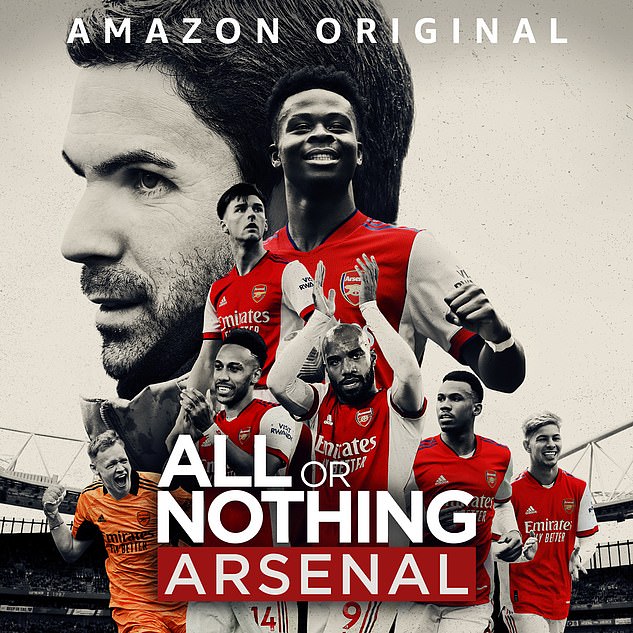