Sergei Pavlovich picked up the biggest win of his career after beating Derrick Lewis on Saturday, but the way the fight ended has been criticised heavily.

The Russian heavyweight was declared the winner less than a minute into the fight after catching Lewis with a flurry of punches, leaving his opponent on the deck.

Lewis got back to his feet almost immediately but referee Dan Miragliotta waved the fight off to hand Pavlovich the 16th win of his UFC career, leading to protests from the former.

However, upon replay, it’s unsure how many punches Pavolvich landed, with boos heard echoing around the American Airlines Center in Dallas.

A number of current and former UFC fighters took to social media to display their frustration at the referee’s decision. 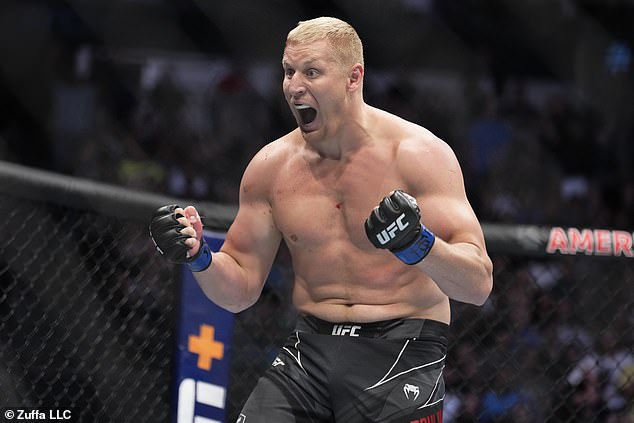 The Russia fighter was heavily booed by fans, who were frustrated by the referee’s decision

This was a bad stoppage!!!!

Early stoppage !!! Have to give the fighter a chance to get back in the fight #UFC277

Meanwhile, Bantamweight fighter Merab Dvalishvili said: ‘Early stoppage !!! Have to give the fighter a chance to get back in the fight’.

Fans also took to social media to vent their frustration. One said: ‘I would say I can understand why the ref thought to stop it because of the face down fall but it was still a bad stoppage based on the instant reaction from Lewis.

A second fan tweeted: ‘Whoever the ref was on Lewis/Pavlovich should be reffing on the regional scene tomorrow. EMBARRASSING stoppage’.