The fear in the Minister’s voice was palpable. ‘It’s not just going to be Covid. He’s going to focus on that. But then it will spiral off into all sorts of other issues. It’s really scary.’

Nigel Farage is back. Last week it was announced the Brexit Party would be rebranding as Reform UK. Its mission: to use the Covid crisis as the catalyst for a fresh assault on an exhausted and embattled British political establishment.

‘The Government has dug itself into a hole with coronavirus and rather than admit its mistakes, it keeps on digging,’ he claimed in a message to supporters.

‘The new national lockdown will result in more life-years lost than it hopes to save, as non-Covid patients with cancer, cardiac, lung and other illnesses have treatments delayed or cancelled again. Businesses and jobs are being destroyed.’

Nigel Farage is back. Last week it was announced the Brexit Party would be rebranding as Reform UK

His return was immediately dismissed as irrelevant grandstanding. The Farage era was over, his opponents scoffed dismissively. At which point, the opinion polls suddenly scoffed back.

Boris Johnson had slumped five points below Sir Keir Starmer. The Tories were languishing on 35 per cent, their worst rating since Boris entered Downing Street.

And the Brexit Party – a party that no longer exists – were up to six per cent, just a point behind the Liberal Democrats.

‘We’ve not got an Election coming up, so that’s not the immediate problem,’ a Minister said.

‘But just having Farage back in the conversation means in every poll we’re going to be five or six points lower than we would be. And when you get stuck there, it starts to spook people. Especially the Red Wall MPs.’

For many people, Nigel Farage is nothing but a political opportunist. Maybe he is – but he’s a brilliant one. And the fact that he has seen in the Covid crisis his next great opportunity should strike fear into the heart of Boris, Starmer and every other mainstream politician. 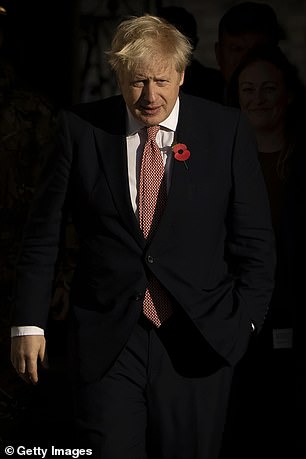 Boris Johnson had slumped five points below Sir Keir Starmer. The Tories were languishing on 35 per cent, their worst rating since Boris entered Downing Street. And the Brexit Party – a party that no longer exists – were up to six per cent, just a point behind the Liberal Democrats

Farage is the master of identifying and exploiting a political vacuum. Saying the things others dare not say. Embracing positions few would touch with a barge-pole. And he has seized on the fact that coronavirus is not creating a vacuum, but gouging a gaping, plunging chasm through the heart of our nation.

Last week, England was again forced into solitary confinement. For the next month – at a minimum – our most basic rights have been placed into cold storage. And it was done without so much as a whimper from our political class. The Government ordained it. The official Opposition rubber-stamped it. And the House of Commons meekly acquiesced to it. Of the 555 MPs who voted on introducing a new national lockdown, only 39 raised their voice in opposition.

It’s happening again. Yes, there are many people who believe a ‘circuit-breaker’ is the best way of protecting life and safeguarding the economy. But there are many who do not.

And they are once more being elbowed aside as a cosy national consensus is constructed around them. Actually, to say ‘constructed’ is to imply there is some form of design to the latest Covid masterplan.

There is none. At least not one most members of the Cabinet have been privy to. ‘There has been no consultation on any of this,’ one Cabinet Minister told me. ‘I didn’t know anything about it until I heard it on the news.’

Two weeks ago, I wrote how Boris was about to be ambushed by his scientific advisers. ‘In the next couple of weeks, Chris Whitty and Patrick Vallance will reappear at Boris’s door, and advise him that, if he doesn’t introduce much more stringent measures, Covid will spiral out of control,’ I warned. They did. And Boris capitulated.

The result is that at the top of Government there is now no leadership worthy of the name. Without any senior allies, Rishi Sunak has been forced to abandon his fight to stave off another lockdown. The Cabinet have been neutered. And Boris himself has become a cowed and isolated figure.

‘You can’t get him to listen,’ one Minister said. ‘And when he does listen, what you’re saying doesn’t register. I think he’s mentally checking out. I really think he may just walk away in the New Year.’

But it’s not just that the British people are once more witnessing an abdication of leadership. They are also being sold a false prospectus.

On Thursday, the Government was rebuked for using misleading data to justify the circuit-breaker.

‘The use of data has not consistently been supported by transparent information being provided in a timely manner. As a result, there is potential to confuse the public and undermine confidence in the statistics,’ the Office for Statistics Regulation warned.

This came after it emerged that an apocalyptic graph showing winter Covid deaths spiralling above the first peak had been surreptitiously amended, and broader claims about the disease rampaging out of control were undermined by new data revealing that the number of new infections had actually fallen by 12 per cent.

A leadership vacuum. A tranche of dodgy dossiers. An elite consensus stitched up between the mainstream parties. The stage has been constructed – all that’s required now is for Nigel Farage to slap on the greasepaint and stride on to it.

And when he does, he will again be mocked and vilified. People may well find his exploitation of a global pandemic that has claimed over a million lives tasteless.

But it won’t matter. Partly because the role of pantomime villain is one he relishes. And partly because who else is going to speak for those who think we have entered a lockdown too far?

Who, come to that, is allowed to speak at all? No substantial scientific analysis has been provided to support the new lockdown. No assessment has been made of the economic impact of the new lockdown. But any politician – or anyone else – who dares call for one is met with hysterical cries of ‘Granny Killer!’ and comparisons to David Icke.

We have once chance left to stop history repeating itself. On December 2, the lockdown is scheduled to end. And it must. That is when Boris must finally call a halt. Either the circuit-breaker will have done its job, in which case we can be released. Or it will have failed. And we will have definitive proof that we cannot defeat Covid by playing hide-and-seek with it.

Because if we don’t end lockdown then, we know what happens next. Brexit. Immigration. Covid. Every time the ground is ceded, Nigel Farage strolls over with a fag, a pint and a cheeky laugh to fill it.

‘We are keeping a very close eye on the Prime Minister,’ he told his supporters.

Boris and his party know it. And they should be very afraid.