Last week a dejected Tory MP was sitting in the House of Commons lobby when the Prime Minister appeared.

‘He saw me and said, ‘Don’t worry. Everything will be all right in the end,’ the former Minister recounted, ‘then just ambled off.’

Things are not going to be all right. It was left to Rishi Sunak – as ever – to shine the cold light of reality on to Boris’s denial.

‘Our health emergency is not over,’ he told the Commons on Wednesday. ‘And our economic emergency has only just begun.’

If Boris was simply misleading the British people, that would be bad enough. But in his statement last week he went further, and began to shift the blame for the crisis subliminally on to those who have found themselves rudely bundled back into lockdown

Next week, Britain was supposed to emerge from its latest lockdown. ‘I can therefore confirm that national restrictions in England will end on December 2 and they will not be renewed,’ Boris told the nation, as he unveiled his new Winter Plan.

It was sophistry. Come Wednesday, 98 per cent of the UK population will be incarcerated within areas with ‘High’ or ‘Very High’ Covid restrictions.

When we entered the ‘circuit breaker’, 24 million people were living under Tier 2 and 8.6 million under Tier 3. From next week 32.2 million will be in Tier 2, and 23.3 million in Tier 3. In October, Boris claimed our new national purgatory would last 27 days. The new measures are set to be in place until Easter, at a minimum.

If Boris was simply misleading the British people, that would be bad enough. But in his statement last week he went further, and began to shift the blame for the crisis subliminally on to those who have found themselves rudely bundled back into lockdown. 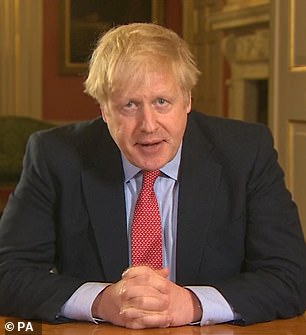 Whatever the answer, the brutal reality is this: in his attempt to protect the economy and the health of the nation, Boris has failed to do either. The PM is seen above in March when he placed Britain into lockdown

‘The allocation of tiers will be reviewed every 14 days, starting on December 16,’ he announced. ‘Your tier is not your destiny. Every area has the means of escape.’

Did you hear that in Tunbridge Wells? In Bishop Auckland? In Batley? If you’re not out of Tier 3 in two weeks, it’s your own fault. You just haven’t seized your destiny.

But even that mendacity, the insidious attempt to begin to shift responsibility, would be forgivable if what Boris and his experts were proposing was actually working. But it isn’t, and it never has.

First there was the Leicester experiment. It would, Ministers said, be a ‘hopefully short, extended lockdown’. This then became the Whack-A-Mole strategy.

‘Part of the solution as we go forward will be responding with local responses. So, if there’s a flare-up in a particular part of the country we will be doing Whack-A-Mole,’ Boris proudly announced. When that didn’t work, the tier system was introduced. ‘We are going to turn round the virus with a local and regional approach. It can drive down the virus and will drive down the virus,’ he claimed.

The alternative was the national lockdown Sir Keir Starmer was advocating which would, Boris warned, ‘turn out the lights’. Then the tier system failed. So he was forced to turn off the lights himself.

Now we have the new, super-tough, testosterone-fuelled tier system. And Ministers are already privately warning it won’t work either. ‘We’re heading for a New Year lockdown,’ one informed me bleakly. The Prime Minister’s defenders continue to argue he is trying to strike a – perhaps impossible – balance between protecting the economy and saving lives.

‘Yes, it’s s***,’ one loyal backbencher told me, ‘but when you’re getting daily reports of people dying who you’ve met and know, you become a bit more understanding.’

But others believe Boris is no longer even clear in his own mind what his strategy is.

‘I don’t think even he knows what he’s trying to achieve now,’ a senior backbencher told me.

‘Look at this Christmas truce thing. Either the virus is dangerous or it isn’t. And if it is, why are we unleashing it for a week?’ 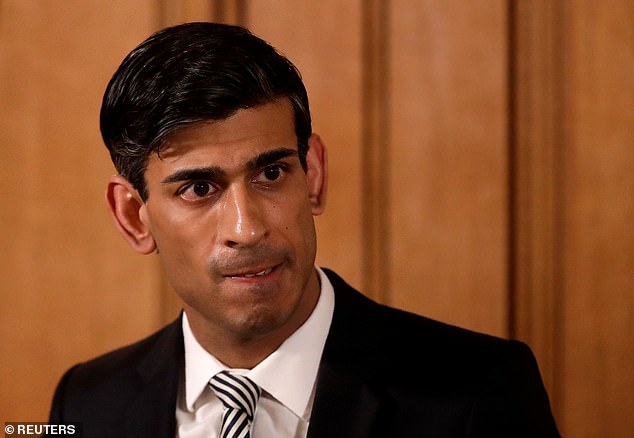 Things are not going to be all right. It was left to Rishi Sunak – as ever – to shine the cold light of reality on to Boris’s denial. The Chancellor is pictured above in March

Whatever the answer, the brutal reality is this: in his attempt to protect the economy and the health of the nation, Boris has failed to do either. The Government’s strategy hasn’t protected the 57,000 people who have already succumbed to the disease.

It hasn’t protected the 3,621 cancer patients the Lancet has estimated will die over the next five years as a result of diagnostic delays due to Covid.

It hasn’t protected the 82 per cent of dementia patients the Alzheimer’s Society found were experiencing a significant deterioration in their condition, or the 34 per cent of elderly people Age Concern discovered were suffering from worse or much worse anxiety since the start of the pandemic.

It hasn’t protected the two-thirds of abused women who told Women’s Aid they have suffered more violence since lockdown began.

And it hasn’t protected this and future generations from crippling debt that will top £394 billion this year and account for 97.5 per cent of GDP in 2025-26.

One Cabinet Minister was in despair at the lack of forward planning: ‘We knew this second pandemic was coming but we didn’t prepare. We were telling people to go back to work when we knew in a couple of months we’d be locking them down again.’

Another Minister said: ‘The problem is this is just who Boris is. He can’t take a clear position. He always wants to be just a little bit pregnant.’

It can’t continue. This week MPs will be asked to rubber-stamp the latest desperate gamble masquerading as the Government’s Covid strategy. And they must refuse.

One Tory MP told me they believe between 50 and 80 of their colleagues may be prepared to finally take a stand. Well, if they’re so minded, now is the moment to steel themselves.

First, they should demand the evidence to underpin the latest plan. Where is the supporting scientific data? Where is the cost-benefit analysis? And, crucially, what criteria is being used to place each region in each tier, and what will the criteria be to enable each region to exit that tier?

Secondly, they must insist on a time limit to our latest period of internment. We cannot continue to yo-yo in and out of lockdown. We are told vaccinations will commence next month.

Fine. Then it should be possible to produce a broad timetable for how long it will take to vaccinate the different sections of the population.

When will vaccinations for the most vulnerable age group – 80-plus – be completed? March? April? Next December? December 2030?

Whatever it is, we now need a line in the sand. A moment when we, as a nation, agree to say: ‘We have done all we can. Now we need to begin to return to normal life.’

And, finally, Boris must make a choice. There can be no more benign equivocation. His priority can either be the Zero Covid strategy being advocated by his scientists.

Optimism has always been the PM’s strength. But now it is in danger of destroying him and his premiership. A cheery belief that something will turn up is not a strategy.

Just as issuing increasingly vacuous homages to British stoicism, while roughly and randomly manhandling the British people from one lockdown tier to another, isn’t a strategy.

‘Everything will be all right in the end,’ Boris said last week. It won’t. And if he cannot see that, then the time has come for Tory MPs to make him face reality.