D-Day hero, 95, dies before he can marry his wartime sweetheart after they were reunited 70 years later but Covid delayed their wedding and forced them to live apart

A D-Day hero has died aged 95 before he could marry his wartime sweetheart after Covid delayed their wedding.

Decorated veteran Roy Vickerman passed away in his sleep last week after being unable to shake a cough following a chest infection.

In 1944, he joined the Black Watch – a Royal Regiment of Scotland infantry battalion – aged just 18 to fight the Nazis in the Second World War. He later joined the Army Intelligence Corps.

His traumatic wartime experience and the resulting post-traumatic stress meant he broke things off with his childhood sweetheart Nora Jackson.

The pair rekindled their romance 70 years later when Mr Vickerman turned up at her home with flowers and they were due to marry – but the wedding was pushed back due to Covid.

Now his family, friends and other former soldiers hope to give Mr Vickerman a fitting send-off with a big funeral.

Aged 19, Mr Vickerman returned to his family’s one up-one down home in Stoke-on-Trent.

He was physically injured and suffered from post-traumatic stress disorder which lead to him breaking off his relationship with girlfriend Ms Jackson, who he’d met at school.

The pair rekindled their romance 70 years later when Mr Vickerman was given Ms Jackson’s address by a friend and arrived by taxi.

He had intended to simply give her a bunch of flowers and apologise for the way their romance had ended after the war.

Instead, Ms Jackson threw her arms around him. Soon after, Mr Vickerman proposed using a ring he had originally given her during the war.

They hadn’t been able to set a wedding date due to the pandemic, but remained engaged right up until Mr Vickerman’s death.

Mr Vickerman was called to serve with the Black Watch at the age of 18 in 1944.

The Black Watch landed in France in September 1939. Troops were a part of the Normandy landings – known as D-day – in June 1944.

The operation was the largest seaborne invasion in history. It began the liberation of France and laid the foundations of the Allied victory on the Western Front.

The Black Watch also took part in the Dunkirk evacuation – code named Operation Dynamo – in June 1940 which saw British and French troops transported back to England across the Channel as they retreated from the advancing Nazi forces. 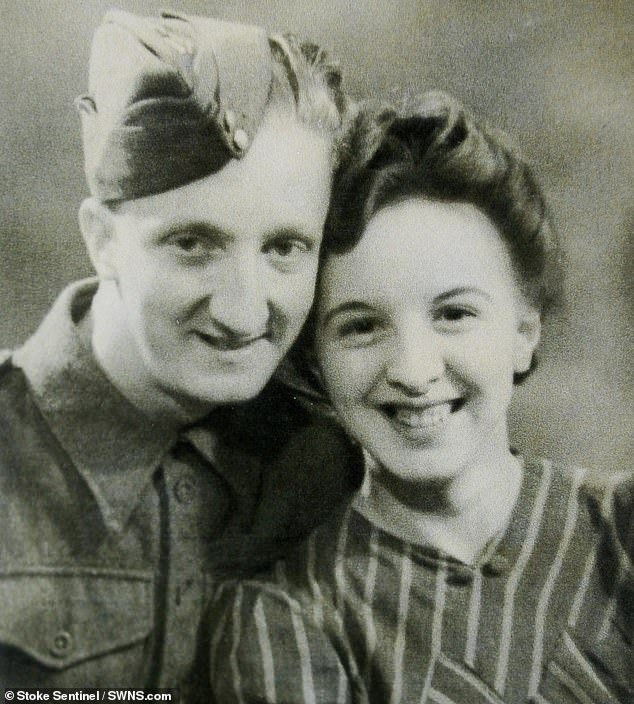 Mr Vickerman later joined the Army Intelligence Corps. It was a vital service during the war, with members taking part in the creation of the Special Air Service (SAS) and deciphering the enigma code, among other roles.

His son Howie Vickerman, 63, told the Stoke Sentinel: ‘They talked on the phone and face-to-face through FaceTime.

‘After he got back together with Nora, he was happier than I had seen him in years. He had a glow in his face.’

Howie recalled how Mr Vickerman was a ‘brilliant dad’ who was close to his grandson.

He had remained remarkably lucid and fit for his age, even taking on a cycling challenge during the pandemic.

Mr Vickerman managed to complete 500 miles in less than 40 days by using an exercise bike at home, raising funds for the NHS along the way.