A billionaire known as the ‘Czech Sphinx’ has been given the go-ahead to tighten his grip on Royal Mail – and even launch a full-blown takeover bid.

In August, then-Business Secretary Kwasi Kwarteng launched a national security review after the tycoon moved to increase his stake in the company to more than 25 per cent.

Probe called off: Daniel Kretinsky is free to increase his 22pc stake in the company

But IDS said it has been notified by current Business Secretary Grant Shapps that ‘no further action’ would be taken against Kretinsky should he increase his stake.

That effectively clears the way for the billionaire to raise his investment in the parcel carrier – or even launch a takeover.

The rally will come as welcome respite for the company, which changed its name to IDS last month and has threatened to split the business in two, casting doubt over the future of Royal Mail even before the ruling by Shapps.

While the international parcels delivery arm Global Logistics Services (GLS) is thriving, the struggling Royal Mail business in the UK is locked in a bitter dispute with unions and losing £1m a day.

Kretinsky has previously hinted he could expand his stake in the company above 25 per cent, which would require him to inform markets.

No further action to be taken

Under City rules, the tycoon would be obligated to make a takeover offer for the firm if his stake rose to 30 per cent.

Analysts at broker Peel Hunt said the news was ‘clearly positive’ for IDS but it remained to be seen whether Kretinsky would up his stake in the group.

Meanwhile, Liberum said the decision removed a ‘potential block on IDS being acquired’ which would support the share price in the short term despite the ‘significant structural challenges’ facing Royal Mail.

Kretinsky, who built his fortune through infrastructure and power assets in central and Eastern Europe, has invested in other British companies including supermarket chain Sainsbury’s and also holds a 27 per cent stake in Premier League football club West Ham United.

The Sphinx with an eye for energy and football 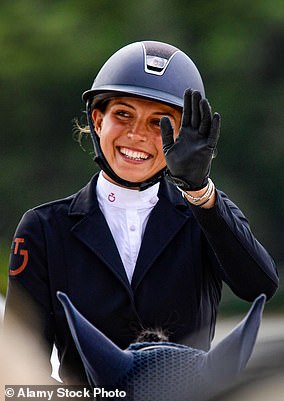 Daniel Kretinsky acquired his ‘Czech Sphinx’ nickname due to his inscrutable approach to investing.

Born in the town of Brno, the 47-year-old is estimated to have a net worth of around £4.3billion.

He made most of his money buying up Czech power plants and owns Energeticky A Prumyslovy Holding (EPH), Central Europe’s largest energy group.

The keen sports fan is the co-owner of Czech football team Sparta Prague, has a stake in West Ham United and also has an eye for property investments.

In September, it was reported he had purchased Chateau du Marais, a castle located south-west of Paris, for £37million with plans to turn it into a luxury hotel complex.

Kretinsky’s girlfriend is Anna Kellnerova (pictured), a 25-year-old Czech showjumper who competed at the 2020 Tokyo Games.

Alex Irving, an analyst at Bernstein, said it was ‘not clear’ what Kretinsky’s end game was at IDS, but admitted there was ‘nothing stopping him’ from buying it.

Meanwhile, AJ Bell’s Russ Mould said the billionaire was likely to be more interested in GLS, the company’s more profitable international arm, rather than the troubled Royal Mail business.

‘Royal Mail remains racked by competition and industrial unrest – it continues to run at a loss and is consuming cash,’ Mould said, adding that any overseas takeover would ‘surely’ be blocked by the Government.

‘GLS, however, is an entirely different matter,’ he said.

‘It is profitable and although rising fuel and other costs will be a challenge it appears better placed to tackle them than Royal Mail.

‘Any break-up of IDS could perhaps give Mr Kretinsky a chance to cherry-pick this asset.’

The IDS share price boost also came as the Communication Workers Union (CWU), which represents around 115,000 Royal Mail workers, called off strikes that had been planned for the next two weeks following a legal challenge by the company.

The CWU said on Sunday it had scrapped planned walkouts between November 2 and 10 although strikes would resume on November 12. Royal Mail and the CWU are in a dispute over wages.