The head of the CBI said recovery must be the ‘number one focus’ and Cobra Beer boss Lord Bilimoria said businesses were ‘desperately crying out for leadership’ and a focus on growth and investment.

But some economists reckon such a stimulus could pour fuel on the inflationary fire, forcing the Bank of England into steeper interest rate rises.

Tax plea: The head of the CBI said recovery must be the ‘number one focus’ and Cobra Beer boss Lord Bilimoria said businesses were ‘desperately crying out for leadership’

The upheaval in Westminster came as the Government’s Budget watchdog, the Office for Budget Responsibility, warned that the national debt could balloon out of control, more than tripling over the next 50 years, unless ministers hiked taxes further or cut spending.

The Prime Minister said in his resignation speech that his successor should be ‘equally committed to cutting burdens on businesses and families and yes, cutting taxes’.

Yet his former chancellor Rishi Sunak’s policies to hike corporation tax from 19 per cent to 25 per cent, freeze income tax thresholds, and raise national insurance mean the overall income tax burden is on course to rise to its highest level since the late 1940s.

Nadhim Zahawi, Sunak’s replacement, has raised the prospect of rolling back the corporation tax rise planned for next April, saying: ‘There’s nothing off the table.’

Bilimoria told the BBC: ‘We need to cut taxes.

‘We’ve got the highest tax burden in 70 years, it’s absolutely the wrong thing to have at this time – at any time, let alone at a time like this when business needs help and consumers need help. 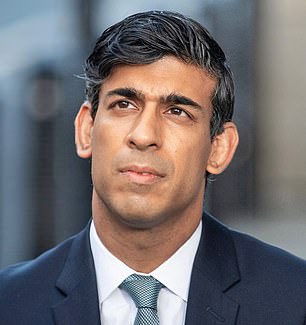 Brexit backer John Longworth, the former head of the British Chambers of Commerce who now leads a network representing family businesses, said firms were ‘desperately disappointed by the Government’s lack of economic policy’.

He added: ‘They did not take advantage of Brexit whatsoever. Where’s the deregulation, where are the tax cuts, where’s the reduction in external tariffs which we can do unilaterally to reduce the cost of living?’

CBI director-general Tony Danker said: ‘We need the political vacuum to be filled at speed to protect people’s living standards, through action on business confidence, investment and growth.

‘Getting the economy growing again has got to be the number one focus for all politicians.’ Alex Baldock, chief executive of electrical retailer Currys, said: ‘The consumer needs some help through the cost-of-living crisis.’

That meant the change of leadership ‘may lead to fiscal policy being a bit looser and monetary policy having to be a bit tighter’.

He is also in favour of unfreezing the income tax threshold, which is pushing more and more people into the top tax bracket.

Davis argued that Britain’s high tax burden was ‘a major contributory factor’ in its current economic woes and dismissed the OBR’s argument, which he said ignored the fact that boosting growth would give a significant boost to tax revenue.