By Ray Massey For Thisismoney.co.uk

Super-rich customers commissioning one-off bespoke luxury cars with an average half-a-million-pound price-tag have propelled Britain’s Rolls-Royce to record sales and profitability as it accelerates into an electrifying new era.

Hailing ‘a great British success story’ as it prepares to launch its first ever pure-electric production vehicle – the new Spectre grand tourer – Rolls-Royce Motor Cars announced best-ever sales in 2022 of 6,021 cars; an increase of 8 per cent or 435 cars on the previous record of 5,586 set in 2021.

Increased bespoke personalisation and luxurious extras had supported the marque’s ‘record profitability achievement in 2022’, it said.

Bosses added that they are ‘cautiously optimistic’ that 2023 would also prove a ‘strong year’.

Rolls-Royce’s chief executive, Torsten Müller-Ötvös, said last year that 2021 record sales at the height of the Covid pandemic had been accelerated by a ‘life can be short’ mentality among the wealthy deciding to live for the moment and not delay luxury purchases.

This year, Mr Müller-Ötvös says even higher profitability and record sales to around 50 countries worldwide during 2022 were boosted by the highest value of bespoke commissions in the marque’s 118 year history – averaging around £500,000 per car, which doubles the price of some of its high-end models.

This included the second of a unique series of three ‘Boat Tail’ ultra-exclusive vehicle commissions – rumoured to have cost an eye-watering £20million each.

Pre-orders for the new electric Spectre, expected to be priced from more than £300,000 with first deliveries from this autumn, have also ‘exceeded ambitious expectations’, said Rolls-Royce. 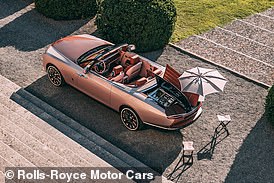 Rolls-Royce last year unveiled the second in its Boat Tail trio of the most expensive new cars in the world – worth a combined £60million.

Commissioned by a secretive – and unnamed – family which made its fortune in the pearl trade, the bespoke £20million one-off coach-built luxury convertible grand tourer features a unique pearlescent exterior finish and interior detailing inspired by mother-of-pearl. This includes a dashboard clock and a host of luxurious gadgets and fripperies.

At the back is a ‘hosting suite’ with a one-of-a-kind dining set, drinks chiller and food heater, folding chairs, extending tables and even a parasol that are all hidden under a pair of butterfly doors that elegantly open to reveal the delights stowed beneath.

Rolls-Royce declined to name the specific client for the world’s joint most expensive car, but said the new Boat Tail had been created by its bespoke Coachbuild arm for him, ‘in homage to his father and family heritage’.

At a press briefing attended by This is Money on Monday, Torsten Müller-Ötvös fleshed out the proportions of sales.

He said the Americas accounted for 35 per cent of sales, China 25 per cent and Europe 20 per cent – with record sales in the UK and Germany last year.

The Middle East contributed to 10 per cent of sales and Asia Pacific 10 per cent.

By model, the Cullinan SUV accounted for half (50 per cent) of all Rolls-Royces purchased by customers in 2022.

The next most in-demand model was the Ghost at 30 per cent of orders, ahead of the Phantom limo with a 10 per cent share.

The now discontinued Dawn convertible and Wraith combined took 10 per cent of all annual sales.

Half of all sales were darkly blinged ‘Black Badge’ model variants, which were described by Rolls‑Royce as its ‘more rebellious alter ego’.

The CEO went on to add that the new electric Spectre will create a new model ‘column’ as he looked forward to 2023.

He reaffirmed record profits being delivered to owners at German parent company BMW and said: ‘We will definitely be delivering a record result back to Munich this year.

‘Rest assured, BMW in Munich are very happy with our performance.’

All investment into Rolls-Royce was from money it earned itself, he stressed as the company pursues expansion of its boutique factory at Goodwood, including a new paint-shop, to cope with increased demand for bespoke cars.

But Rolls-Royce would not be seeking investment through an issue of shares through an IPO (Initial Public Offering) he stressed: ‘There’s no appetite for an IPO’, he said. 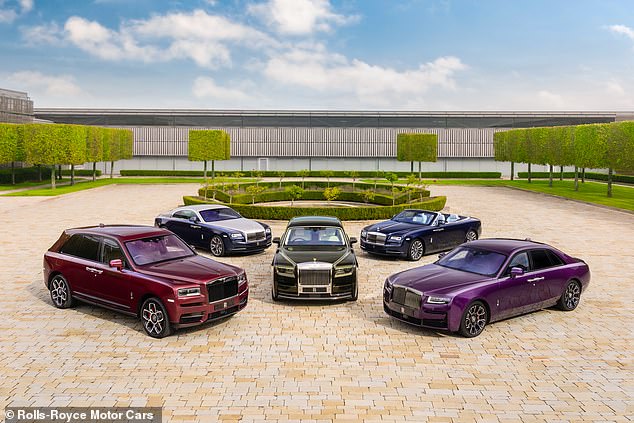 By model, the Cullinan SUV (left, front) accounted for half (50%) of all Rolls-Royces purchased by customers in 2022

Rolls-Royce, owned by German car-giant BMW, welcomed the ‘unprecedented success’ seen in 2022 noting: ‘This is the first time in the company’s 118-year history that its sales have exceeded 6,000 in a single 12‑month period.

This is all paying off handsomely in profits, too.

For although Rolls-Royce doesn’t publish detailed accounts separately from German parent company BMW, industry experts who have dived deep into the figures reckon the firm is now neck and neck with Italy’s Ferrari as the most profitable car company in the world, with an estimated 50 per cent return on investment.