Allies of Dominic Cummings have been using a cruel ‘Princess Nut Nut’ nickname for months, it was claimed today.

The slur went viral over recent days as the extraordinary power struggle between the PM’s fiancee and the Vote Leave cabal emerged in public.

But in fact it is said to have been circulating since the early days of Boris Johnson’s premiership, with tensions evident from the outset.

There has long been frustration that Ms Symonds was running a shadow PR operation, while she is said to have been incensed at the aggressive behaviour of Mr Cummings and his cadre.

Ms Symonds, herself a former government special adviser and Conservative Party head of media, emerged triumphant on Friday night in the struggle for control with Mr Cummings. 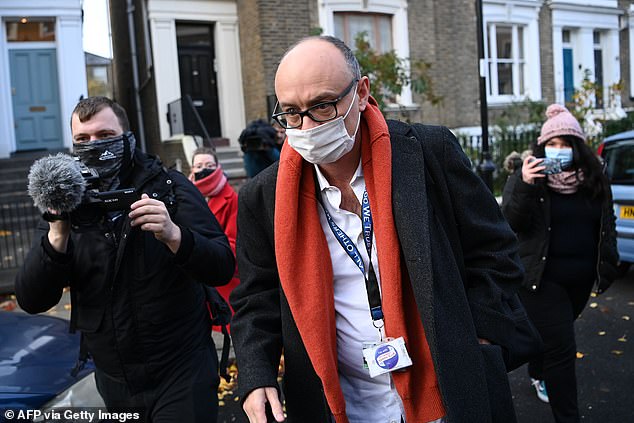 The former Vote Leave chief dramatically carried his belongings out the front door of No10 in a cardboard box, following a final meeting in which Mr Johnson is said to have rebuked the two aides for describing Ms Symonds as ‘Princess Nut Nut’ – although this has been denied by No 10.

Other tags for Ms Symonds previously circulating among the Brexit clique include ‘Cersei’, a reference to the scheming Game of Thrones character.

A source told the Mail on Sunday that the nickname had been wrongly reported as ‘Princess Nut Nuts’.

‘It’s Princess Nut Nut,’ they said, before revealing that Ms Symonds’ adversaries used the phrase so often during the general election that they started using an emoji of a princess followed by two peanuts instead of words in text messages.

Ms Symonds was reportedly labelled a ‘princess’ for what her foes claimed was regal behaviour while the ‘nut’ is believed to be a poor-taste joke about her being ‘crazy’.

Concerns have long been raised over the ‘laddish’ culture in Downing Street under Mr Cummings.

Aides use nicknames for each other such as ‘Caino’, ‘Sonic’ and ‘Roxstar’.

Sources told the MoS that staff hope the shake-up at the top of No10 will usher in a more respectful environment.