The announcement of the fractional funding for lesson time and teacher training falls short of the boost that Sir Kevan Collins told ministers was required.

Sir Kevan’s recommenation that the school day be extended by half an hour has been moved into a ‘next stage’ review which will report by the end of the year.

However, one source familiar with the talks with ministers told the Times last night: ‘Kevan will be gutted. It’s very depressing.’

Education leaders have called the announcement ‘hugely disappointing’ and claimed it ‘lets down the nation’s children’.

Paul Whiteman, general secretary of school leaders’ union the NAHT, said: ‘It’s a damp squib – some focus in a couple of the right areas is simply not enough.

‘The funding announced to back these plans is paltry… education recovery cannot be done on the cheap.’

Children will be offered 100million hours of tutoring over the next three years to help them bounce back from the pandemic – but plans for a longer school day appear to have stalled.

Teachers will also receive extra training and support worth £400million, bringing government spending to date on education recovery to more than £3billion.

The Government has also announced that schools or colleges will be given funding to let Year 13 students repeat the year if they have been badly affected by the pandemic. However, a longer school day and a huge £15billion funding package were notably absent.

Amid reports that the Treasury had baulked at the huge figure, Education Secretary Gavin Williamson today confirmed a ‘further instalment’ of just £1.4billion.

Meanwhile, the question of whether the school day should be extended remains under review and ‘will be set out later in the year’, the Department for Education said. 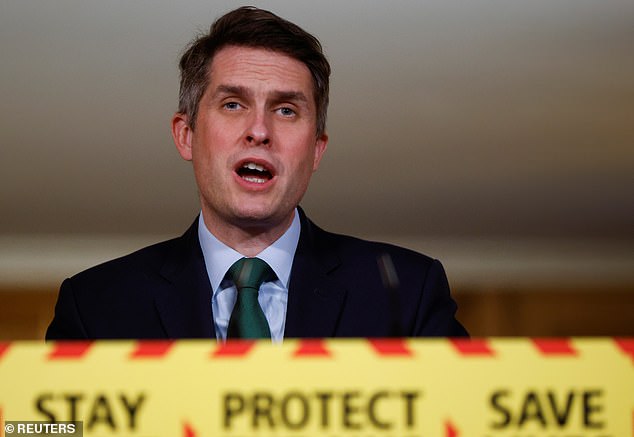 Amid reports that the Treasury had baulked at the huge figure, Education Secretary Gavin Williamson today confirmed a ‘further instalment’ of just £1.4billion

Hailing the extra funding, Mr Johnson said it would ‘make sure that no child is left behind’.

‘This next step in our long-term catch-up plan should give parents confidence that we will do everything we can to support children who have fallen behind and that every child will have the skills and knowledge they need to fulfil their potential,’ he said.

Sir Kevan added: ‘The investments in teaching quality and tutoring announced today offer evidence-based support to a significant number of our children and teachers.’ However, he pointedly warned that ‘more will be needed to meet the scale of the challenge’.

Last night unions reacted angrily to the announcement, saying the package did not go far enough. But government sources said further support measures were in the pipeline. 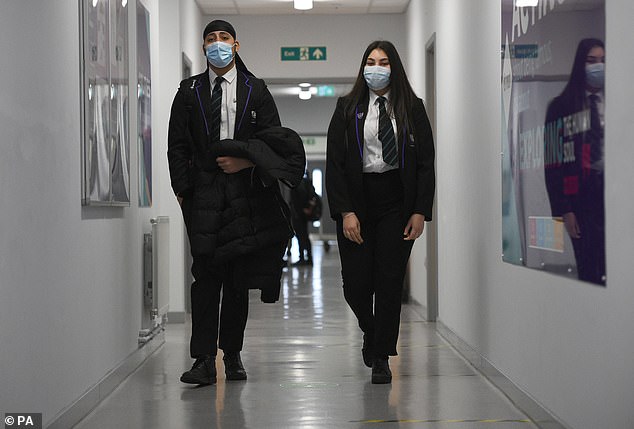 However, a longer school day and a huge £15billion funding package, which were key demands made in a document penned by the education recovery tsar Sir Kevan Collins were notably absent. Stock picture

Labour education spokesman Kate Green accused the Tories of ‘showing no ambition for children’s futures’ as she unveiled alternative measures which would cost £14.7billion.

As well as expanding extracurricular activities and breakfast clubs, mental health support should be available in every school, as well as small group tutoring and teacher development, she said.

Mr Whiteman added he was ‘relieved to see that some of the more headline-grabbing measures previously suggested have been shelved for now’.

‘Extending the school day in particular had the potential to negatively impact on pupils’ mental health, reduce family time and leave less time for extra-curricular activities,’ he said.

Sir Peter Lampl, of education charity Sutton Trust, said the ‘funding is only a fraction of what is required. Low-income students who have already been most heavily impacted will be disadvantaged even more and overall standards, which have fallen dramatically, will be very slow to recover’.