A police chief in Pakistan is facing a growing backlash after he seemed to blame the victim of an alleged gang rape because she was driving without a male companion at night.

The victim was allegedly assaulted and raped by several men in front of her two children when she ran out of petrol outside of Lahore late on Wednesday.

Police chief Umar Sheikh told AFP that no-one in Pakistani society would ‘allow their sisters and daughters to travel alone so late.’

He added that the woman, a resident of France, probably ‘mistook that Pakistani society is just as safe’ as her home country.

Women protest against the alleged gang rape of a French woman outside Lahore, in Pakistan

She said, according to AFP, that ‘Nothing can ever rationalise the crime of rape.’

Khadija Siddiqi, a lawyer and women’s rights activist, told AFP that the police chief’s comments were part of an unfortunate and very rampant culture of victim blaming in Pakistan.

Sheikh’s comments have sparked calls for his resignation and protests are planned in cities across Pakistan today. 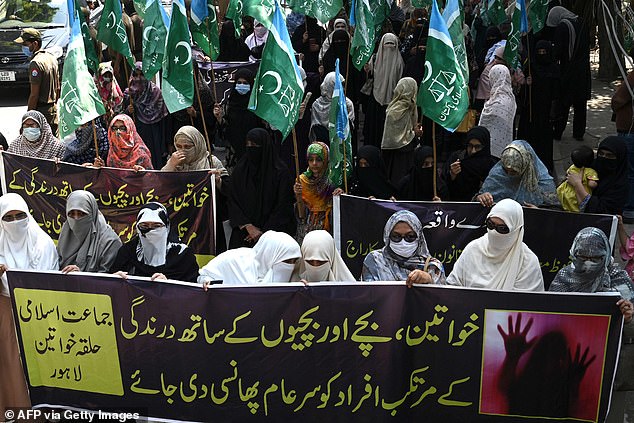 A patriarchal code of honour governors much of Pakistan life which is in favour of the oppression of women by stopping them from doing certain things, like choosing their on husband.

Deadly violence by men, usually male relatives, against those women who break the taboo  have been attacked by activists.

In Pakistan around 1,000 people, mainly women, are murdered yearly in honour killings for bringing shame onto a family.