In November, he stepped forward to shoot down rumours he’d tied the knot with his longtime partner Georgina Rodriguez during a secret ceremony in North Africa.

But Cristiano Ronaldo, 34, landed at the centre of such speculation once again on Monday, when the brunette beauty referred to him as her ‘husband’ in a gushing post celebrating her 26th birthday.

Sharing a snapshot of herself and Ronaldo posing with their children, Georgina wrote: ‘Happy 2️⃣6️⃣ for me, very happy. I can’t ask life more. Just a lot of health for my family and me and to always enjoy them.

Time to celebrate: Cristiano Ronaldo dedicated a gushing post to his partner Georgina Rodriguez in celebration of her 26th birthday on Monday 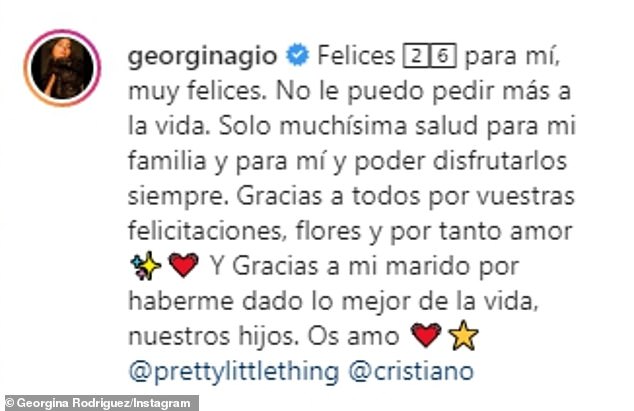 Just married? Georgina’s reference to the star as her husband, ‘marido’ in Spanish, has all but reignited speculation that the couple have quietly tied the knot

‘Thank you all for your congratulations, flowers and therefore love ✨ And Thank you to my husband for giving me the best of life, our children. I love you.’

In Spanish, ‘marido’ is often used to describe a common law husband, while ‘esposo’ is more commonly employed as a description for a legally wed male.

When contacted by MailOnline, representatives for Ronaldo declined to comment.

For his part, Ronaldo shared the same snapshot on his own Instagram account, alongside the caption, in which he shared that he ‘love[s] [her] so much’. 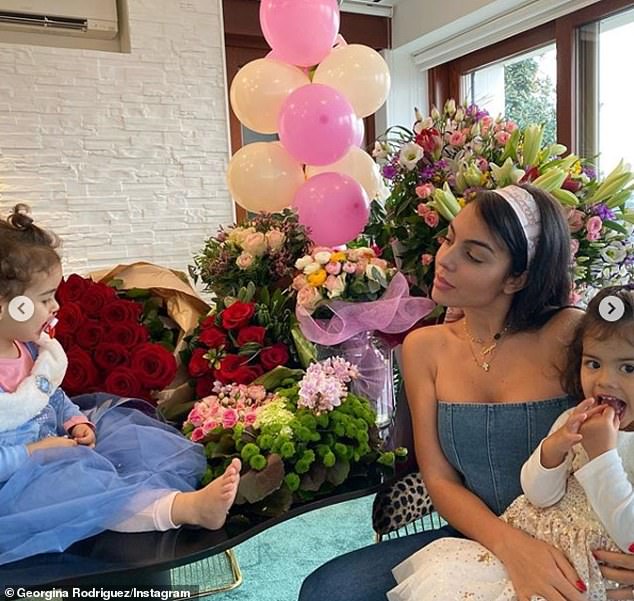 Snaps: Birthday girl Georgina also shared a selection of images on Instagram from her big day 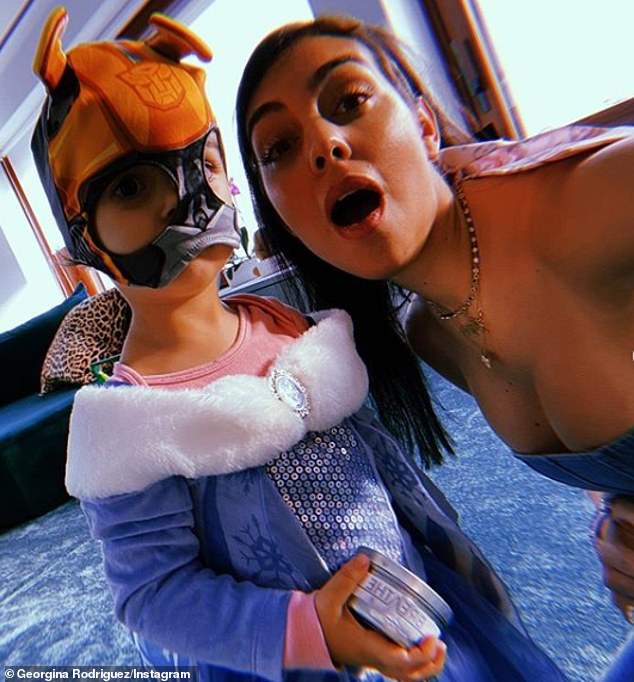 Playing dress-up: The images showed her having a fun-filled time with the couple’s children, who were seen wearing costumes and masks

The Portuguese sportsman wrote alongside the heartwarming image: ‘Congratulations my love! I wish you a very nice day! You are a great woman and an excellent mother for our children. I love you so much honey!’

In the shot, the photogenic family are seen sitting around a table with balloons and flowers in the background, while a candlelit birthday cake is placed before them.

Georgina also uploaded a selection of images of her having a fun-filled time with the couple’s children, who were seen wearing costumes and masks.

She also shared a short video of the happy family singing Happy Birthday to her. 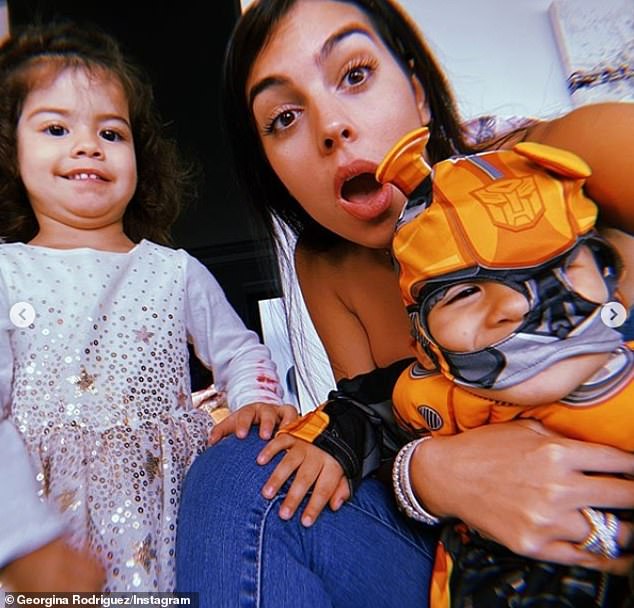 Family: Joining the couple in the snaps were children Cristiano Jr., nine, two-year-old twins Eva and Mateo, and the footballer’s daughter with Georgina, Alana, two 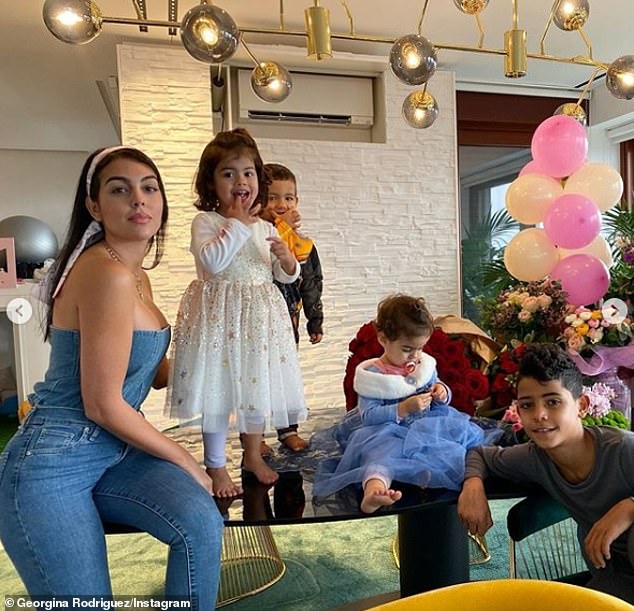 Love: Ronaldo wrote to Georgina, ‘Congratulations my love! I wish you a very nice day! You are a great woman and an excellent mother for our children. I love you so much honey!’

Georgina’s reference to the star as her husband, ‘marido’ in Spanish, has all but reignited speculation that the couple have quietly tied the knot.

Towards the end of November, Ronaldo shot down reports which claimed he wed her in a North African ceremony last August.

Speculation was rife that the media personality had quietly exchanged vows with the former shop assistant, following a report from Novella 2000 magazine in Italy, where Ronaldo plays for Juventus FC.

But sources close to the Portugal captain have denied the rumours, branding all talk of the purported late August ceremony ‘fake news’.

Rumours of a wedding comes just months after Ronaldo, who has been dating Georgina since 2016, revealed plans to marry the brunette – which he insists would be his mother Maria Dolores dos Santos Aveiro’s dream. 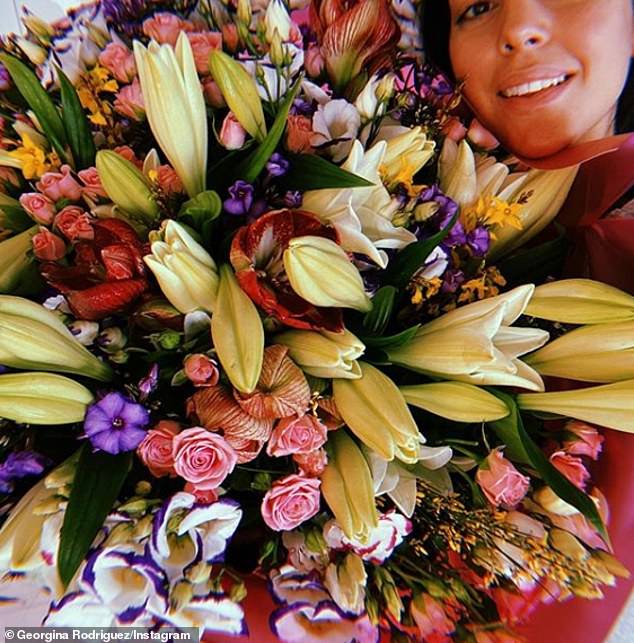 Say it with flowers: Georgina shared a snap of herself posing with a huge bouquet of flowers 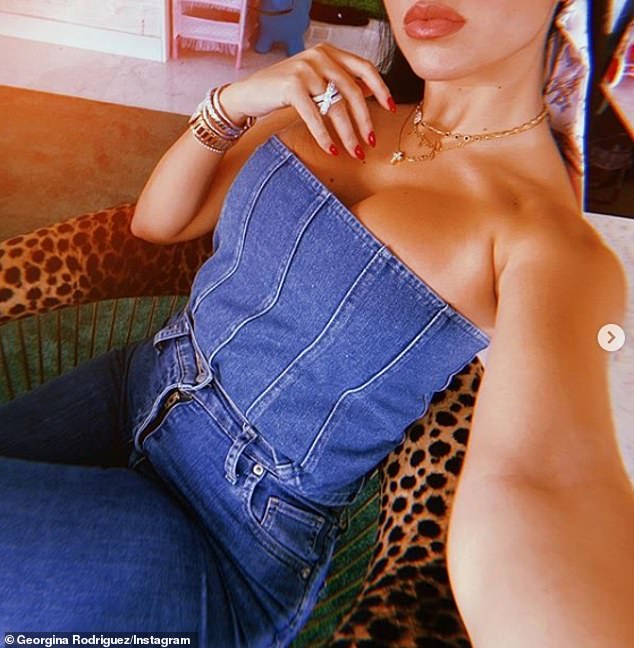 Rumours: Towards the end of November, Ronaldo shot down reports which claimed he had wed Georgina in a North African ceremony last August 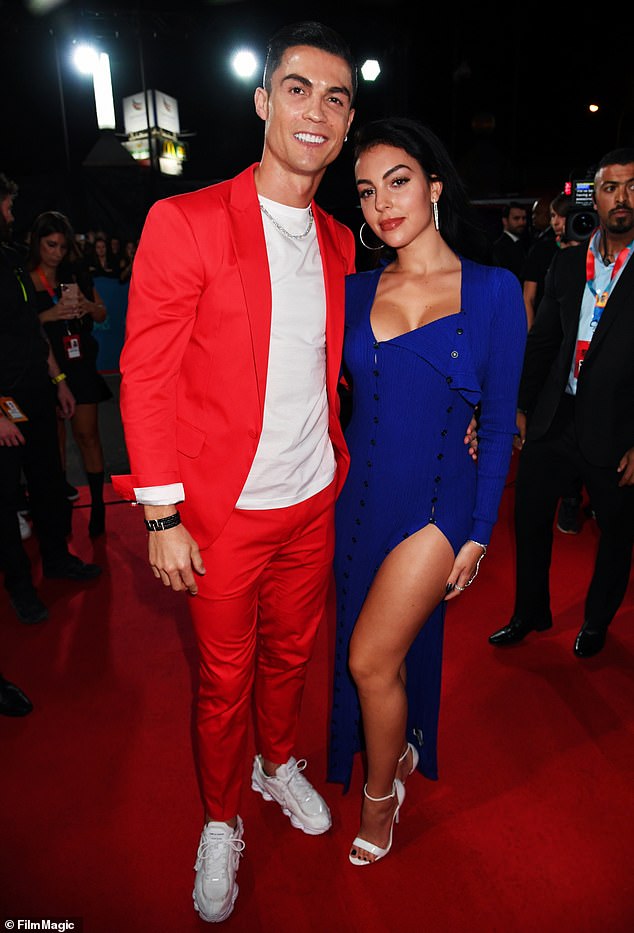 Stepping out: The lovebirds have stepped out together at a number of glamorous events since embarking on their romance. Pictured together in November 2019

Speaking to Piers Morgan during an interview with ITV, he said: ‘She helped me so much. Of course I’m in love with her. We’ll be (married) one day, for sure. It’s my mum’s dream as well.

‘So, one day. Why not? It’s great. She’s my friend. We have conversations. I open the heart for her and she opens the heart for me.’

Despite his exciting profession, Georgina recently admitted it’s ‘not easy’ being in a relationship with someone as famous as him – but she wouldn’t change a thing.

She confessed it was ‘love at first sight’ when they first met and also revealed how she seduces her footballer beau.

The family recently jetted to Dubai together, where Georgina was seen putting on a cheeky display in the pool and enjoying a jet-ski ride. 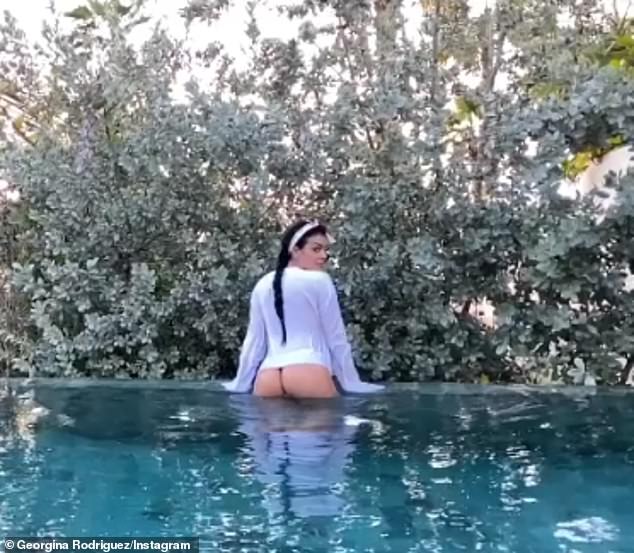 Cheeky display: Georgina showed off her incredible figure in a slew of bikini-clad snaps during her break to Dubai with Ronaldo and their family back in December 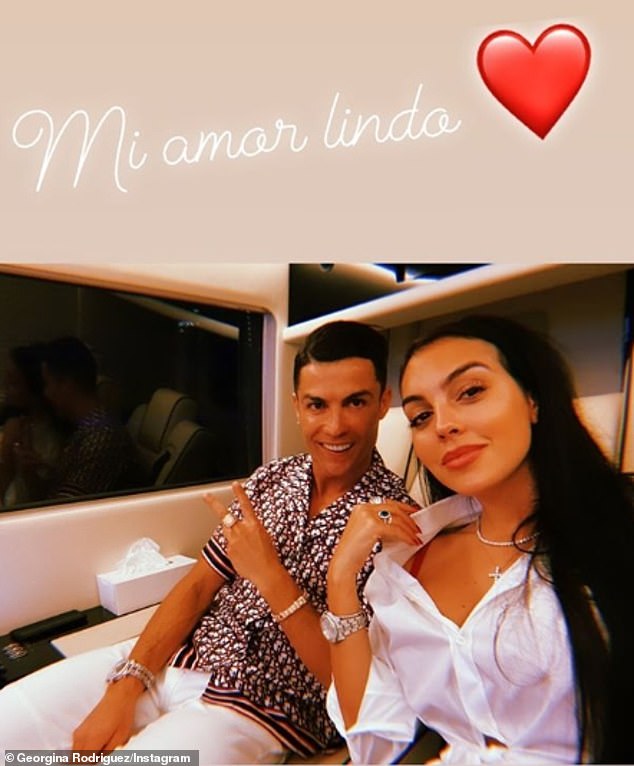 Smitten: Georgina also shared a loved-up snap with the footballer and captioned the post, ‘Mi amor lindo’ (my beautiful love)