Cristiano Ronaldo is PUNCHED in the face by his former Real Madrid team-mate Keylor Navas during his Saudi debut against Lionel Messi, earning him a penalty in the 5-4 defeat by PSG

Cristiano Ronaldo was accidently punched in the face by his former Real Madrid team-mate Keylor Navas during Thursday evening’s game between the Saudi All-Star XI and Paris Saint-Germain.

Ronaldo was playing in the friendly – which was part of the state-sponsored Saudi festival known as Riyadh Seasons – when the incident with the goalkeeper took place.

The Saudi All-Star XI were 1-0 down when Ronaldo rose above his defender to head the ball towards goal. However, Navas came storming out to punch it clear and accidently caught the striker on the cheek. 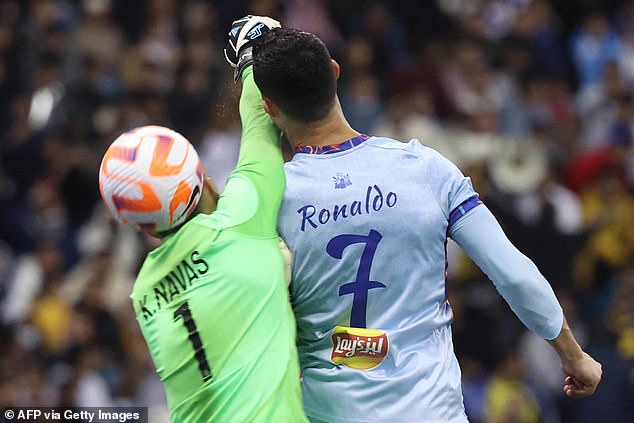 Ronaldo hit the floor and grabbed his face in pain. His team-mates automatically appealed for penalty and their wish was granted after the referee consulted the pitch-side monitor.

Thankfully, Ronaldo was able to continue and stepped up to score the penalty in the 33rd minute of the game. However, the former Manchester United forward did have some heavy bruising on his cheek bone.

Ronaldo added another goal to his tally just before the half-time break. But, it wasn’t enough to win the game as goals from Lionel Messi, Kylian Mbappe, Marquinhos, Sergio Ramos and Huge Ekitike saw PSG win 5-4.

Nevertheless, PSG felt as though they had been hard-done-by with the penalty. At the start of the second half Kylian Mbappe was seen moaning to the referee. Ronaldo was quick to react and walked over to show the 24-year-old his bruising. 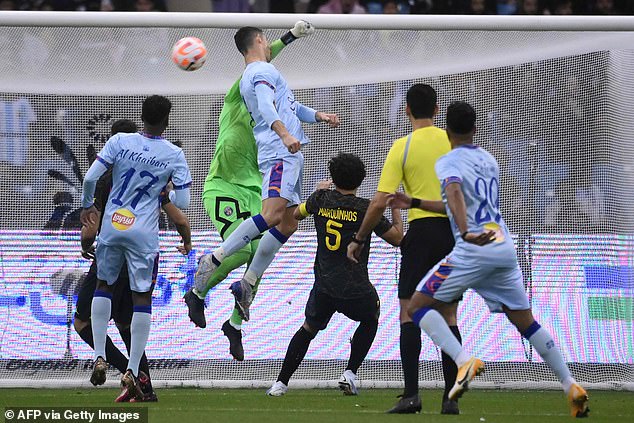 The Saudi All-Star XI were 1-0 down when Ronaldo rose above his defender to head the ball towards goal. However, Navas came storming out to punch it clear and accidently caught him 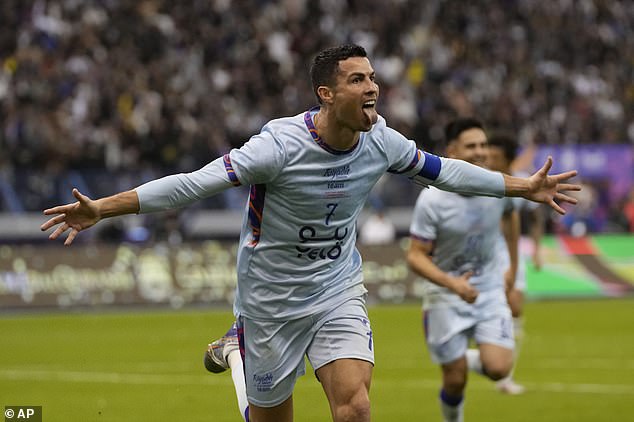 Ronaldo, who joined Al-Nassr on a record-breaking deal worth £173million per year following his acrimonious exit from Manchester United, won Man of the Match for his impressive display.

He received the award for his two goals and his sublime nutmeg on Carlos Soler. In the 11th minute, the Portuguese picked up the ball on the halfway line and cleverly nutmegged Soler, prompting a buoyant roar from the Saudi supporters.

He also tackled his arch-rival Messi on several occasions. The fans enjoyed those moments just as much as the two goals he scored in the first half of the game at the King Fahd Stadium in Riyadh.

However, Messi will have viewed the game as part of his victory lap following his World Cup triumph in Qatar. The trip will have also earned him brownie points as an ambassador for Saudi’s tourism drive.

The game meant much for Ronaldo as it came five weeks after his World Cup ended in tears as a marginalised substitute with Portugal, and nine after his Manchester United career was terminated for the draining of his spleen to Piers Morgan. 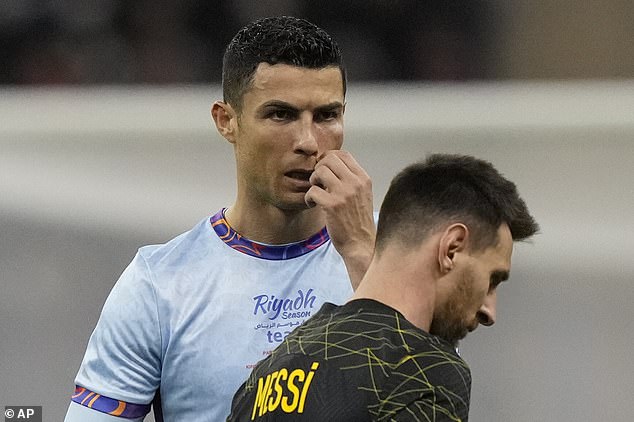 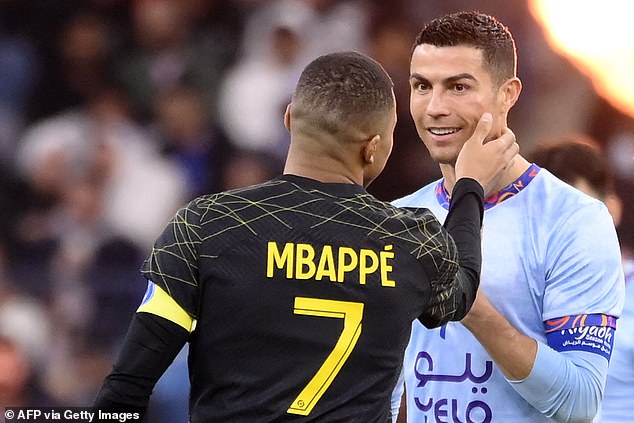 Ronaldo previously defended his decision to join the Saudi Arabian side Al-Nassr. He said: ‘I feel so proud to make this big decision in my life. In Europe, my work is done. I won everything and now this is a new challenge.

‘I’m grateful Al Nassr have given me this opportunity, not only for the football but for the young generation and the female generation. For me, this is a challenge but I feel very happy and very proud.

‘I had many opportunities in Europe, in Brazil, in Australia, in the US and even in Portugal many clubs tried to sign me, but I gave my word to this club. This is a good chance to grow many important points here with my knowledge and my experience.

‘I’m a unique player. I beat all the records in Europe. I want to beat a few records here. This contract is unique but I’m a unique player, so for me it’s normal. I really don’t worry about what people say. I am really, really happy to be here.

‘I know the league is very competitive, I saw many games. I hope to play after (Wednesday) if the coach thinks there’s a chance. I’m ready to keep playing football.’