The write stuff: Mark Billingham says writing his first work of fiction was the best financial move he has ever made

Best-selling author Mark Billingham would hike up taxes paid by those profiting from the cost-of-living crisis if he were made Chancellor.

The 61-year-old crime writer, who famously played dimwitted Gary alongside Tony Robinson in the 1990s children’s TV show Maid Marian And Her Merry Men, would increase taxes on energy companies, private equity companies and anyone who has profited from shorting the pound in recent weeks.

He told Donna Ferguson that writing his first work of fiction about Detective Inspector Tom Thorne was the best financial move he has ever made. His latest novel, The Murder Book, is published by Little Brown.

My mother taught me to work hard for it while my father showed me that money is just as easy to lose as it is to make. He was a businessman who made and lost a lot of money. They got divorced when I was six and my mother brought me and my brother up on her own. She travelled around pubs, emptying jukeboxes and fruit machines for the company that made them. My father wasn’t around – he moved abroad. Money never felt like it was tight because my mum was extremely careful and worked hard. We didn’t want for anything.

Yes – when I was in my early 20s, although it didn’t feel like a struggle at the time. After I graduated from university, where I’d studied drama, I helped set up a small scale, ‘socialist’ touring theatre company. We’d travel round schools and art centres and perform plays we had devised about the campaign for nuclear disarmament or sexism in the workplace.

We made no money at all. So I signed on for benefits for about five years which paid my rent in a flatshare. The food I ate wasn’t particularly nice. I remember buying eight beef burgers for £1, or if I couldn’t afford that, I’d cook spaghetti in water flavoured with an Oxo cube. But I’m sure there were people struggling far more than me.

Yes. In the late 1980s and 90s, I was working as an actor and made crazy money appearing in commercials. Back then, you could live comfortably on two or three commercials a year.

The silliest money I earned was for a series of adverts for a beer company. For each day of filming, I ended up being paid £10,000, including repeat fees. All

d to do was drink a pint and say: ‘It’s a seriously good pint.’ From an acting perspective, it was not remotely satisfying, but it paid the bills.

Last year. I deliver a book every year. In 2021, I earned a good six-figure sum because I signed a contract for three new books and got payments on signing for each of them.

It was a limited edition Elvis Costello Fender Jazzmaster guitar for £3,500. I have far too many guitars than my limited talent justifies.

I have three or four that I play fairly regularly. The rest are collectible guitars I take out and stroke. I play an electro acoustic guitar for the band I’m in – the Fun Lovin’ Crime Writers. It is made up of a bunch of crime writers, including Chris Brookmyre and Val McDermid. We play songs about murder such as Folsom Prison Blues and Psycho Killer. We played at Glastonbury in 2019 and tour all over the world. The fees are not enough to keep me in guitars, but I have tremendous fun.

Buying a moped. The day I got it, I drove in the pouring rain, terrified, thinking I could be in a car. I took it back to the dealership the next day and sold it to them for £1,000 less than I had paid for it.

Deciding to write a crime novel. It took me just a month to write the first 30,000 words of my first book, Sleepyhead. That turned out to be a smart move. It has now sold more than 800,000 copies and has been published all over the world. 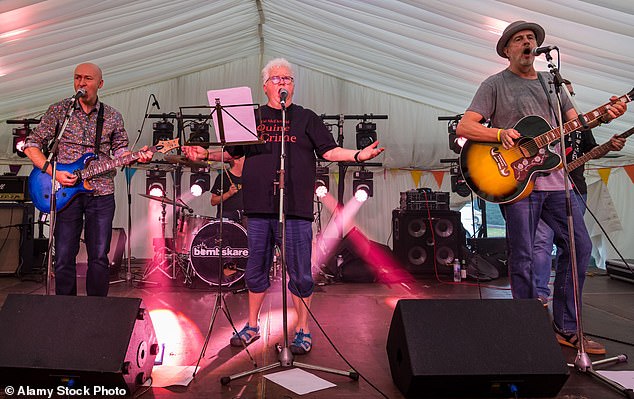 Murdered that: Billingham with the Fun Lovin’ Crime Writers, including Chris Brookmyre and Val McDermid

Yes, but not for my retirement. I’m 61 so I pay in lump sums, and in three or four years’ time, I’m planning to take out the money and pay off my mortgage. My accountant advised me to do that. My backlist of books will be my pension. By the time I stop writing, I should have at least 30 books out, which will hopefully generate enough royalties every year for me to get by.

No. I would rather stick needles in my eyes. I’m risk averse and I am not interested.

Yes. My wife Claire and I live with our kids, Katie, 27, and Jack, 24, in a five-bedroom house in North London, which has probably doubled in value since we bought it in 2003. We’ve also got two holiday homes: a two-bedroom bolthole in Kent and a three-bedroom house right on the water of the Gulf Coast of Florida, which just about survived the recent hurricane.

I get paid in dollars by my American publisher, so I used that income to buy the property ten years ago, rather than taking a hit each time I transferred the money into sterling. It was one of my best financial decisions.

Travelling first class. I tell myself it’s because I’m tall and I’ve got a bad back. Both of those things are true, but actually it’s just because I like the luxury of it.

If you were Chancellor, what would you do?

I would immediately hike up the taxes paid by those profiting from the cost-of-living crisis. That anyone should be shamelessly profiteering while so many see their standard of living plummeting is disgusting.

So, that’s everybody from the energy bosses to the hedge fund investors and anyone with inside knowledge who made fortunes overnight from shorting the pound. Nobody should be getting rich as a result of this crisis, it is as simple as that.

To have enough money in the bank so that I don’t have to worry about my mum who is in her 80s. I want to be able to take care of her, if she needs me to, without it being a financial nightmare.