Aussies stranded in India face fines of $66,000 or five years in jail if they fly home from India, where 300,000 new cases of Covid were recorded on Monday alone.

The former Test opening batsman, who was in India as a commentator for the Indian Premier League, managed to escape to the Maldives and now must wait the designated two weeks to return to Australia.

But Slater’s criticism of the Prime Minister has been met with furor, with many Australians saying he and his teammates chose to travel to India on their own accord.

‘So Michael Slater goes into a war zone to chase money. Now when it has gotten out of control, it’s the Australian Government’s fault?’ one Twitter user wrote. 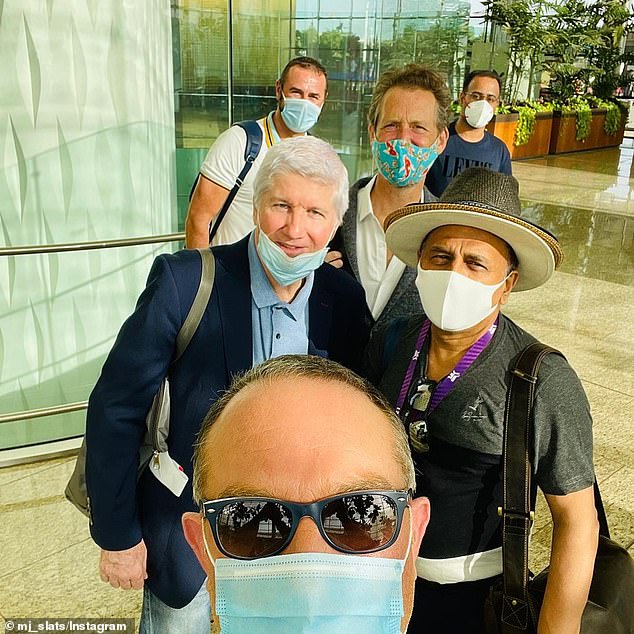 Michael Slater (picture, front, in Mumbai) was recently in India working as a commentator for the Indian Premier League 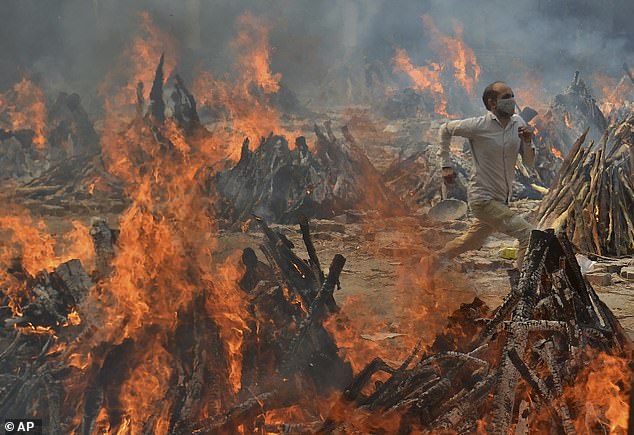 Australia has suspended all flights to and from India until May 15 as the crisis in India worsens. Pictured is crematorium on the outskirts of New Delhi

‘Michael Slater can F O. Attacking the PM when HE went to India to make big cash but now it doesn’t suit him,’ said another.

‘This Michael Slater rant is really something else. He can’t honestly think he went to India knowing what could happen if it went pear shaped?’ wrote a third.

Australian cricket legend Mark Taylor said despite being ‘surprised’ so many players decided to travel to India in the first place, he understood the temptation to make a hefty paycheck.

‘Some of them are on $3million for 12 weeks of cricket so it is hard to knock that sort of money back,’ he told Today on Tuesday.

‘Obviously health concerns and your health should be the No.1 concern. Getting that balance right is not easy.’

Taylor said while he wants to see all IPL players returned home safely and as soon as possible, it shouldn’t be done at the risk of Australians’ health.

‘We’ve navigated through this pandemic very well thanks to a lot of very good government decisions so I feel also for the government who are trying to get this balance right between the people in India,’ he said.

‘There’s 9,000 Australians over there and there from what I understand, and the 25 million of us here who live a pretty good life.’

The criticism comes as the nation’s chief medical officer issued a dire warning about the consequences of the travel ban for the 9,000 Australians still stranded in India. 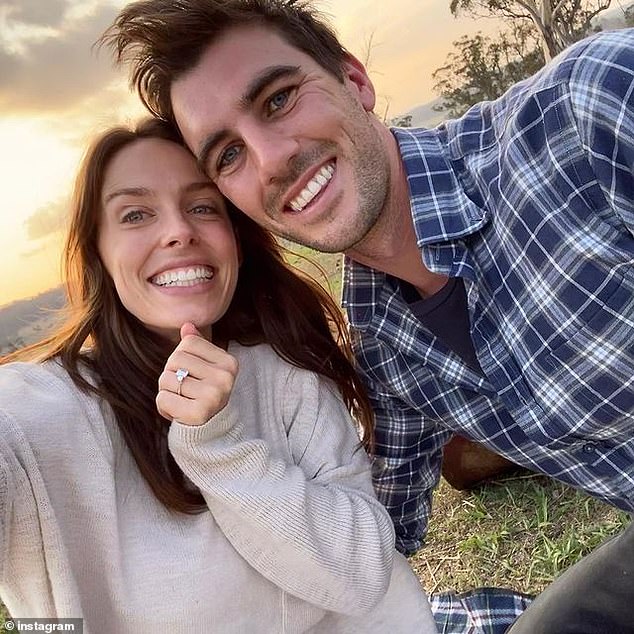 Slater is furious about the treatment of a host of Australian stars stuck in India, including David Warner, Steve Smith and Pat Cummins.

‘If our government cared for the safety of Aussies they would allow us to get home,’ Slater wrote on Twitter on Monday night.

‘It’s a disgrace!! Blood on your hands PM. How dare you treat us like this?

‘How about you sort out quarantine system? I had government permission to work on the IPL but I now have government neglect.’

Slater doubled down on his tirade in a follow-up tweet after he was inundated with backlash.

‘For those who think this is a money exercise. Well forget it,’ he wrote.

‘This is what I do for a living and I have not made a penny having left early. So please stop the abuse and think of the thousands dying in India each day. It’s called empathy. If only our government had some.’

Superstar Cummins is currently in isolation after two of his IPL teammates tested positive to Covid-19.

As many as 9,000 Australians – including the country’s top cricket players – have been stranded in India by the government’s ban on flights from the Covid-ravaged nation until May 15.

Slater’s comments have sparked a divided reaction online with hundreds slamming his decision to go to India.

‘We’re in a pandemic but you still CHOSE to go to India. You knew the risks but you went anyway. Did you expect to be able to pull the ‘don’t you know who I am’ card to get around it?,’ one woman commented. 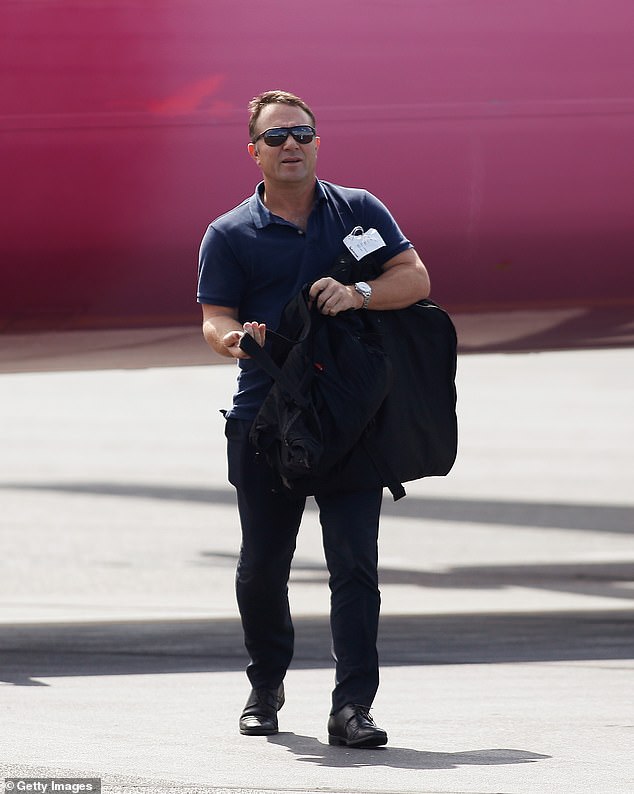 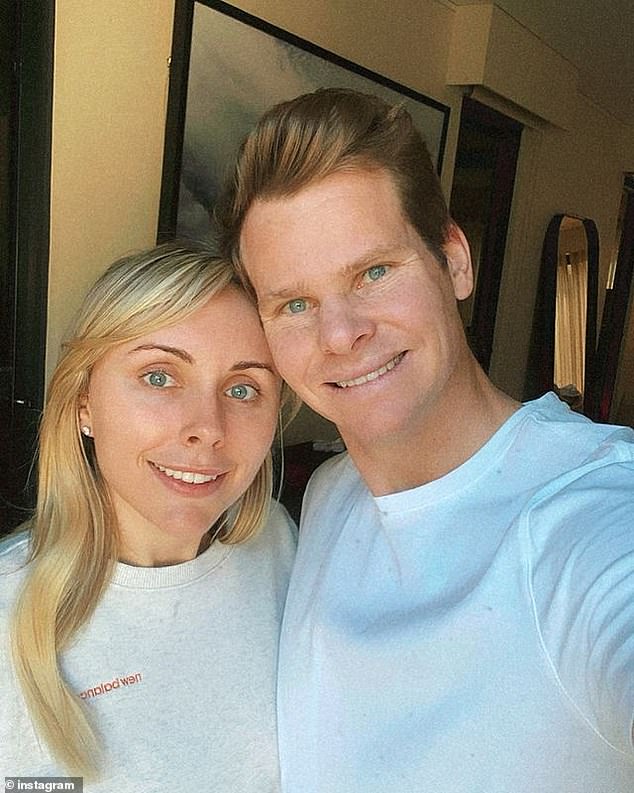 One man added: ‘Mate I feel for you and all those stranded, but when new cases his 100,000 per day on 4 April I think that border closure was inevitable. If the borders were left open the risk of leak from quarantine would be too great and we simply can’t afford lockdowns.’

Some leapt to Slater’s defence.

‘Does it really matter what the reason was? There are tens of thousands of Australian citizens stuck in India right now and they all have different reasons for being there. The fact they’re banned from coming home is a disgrace,’ one man commented.

‘Didn’t happen with US or Europe, did it?’

Another added: ‘Thank you for calling out Scott Morrison’s lack of leadership on quarantine. He has had 12+ months to arrange adequate national quarantine to allow all stranded Aussies to return home.

‘Now he demonises fellow citizens and threatens jail to deflect from his failure.’

Of the 9,000 Australians in India who want to return home, 650 are considered vulnerable.

‘These include the risk of serious illness without access to healthcare, the potential for Australians to be stranded in a transit country, and in a worst-case scenario, deaths,’ Professor Kelly wrote in a letter to Mr Hunt tabled in parliament on Monday 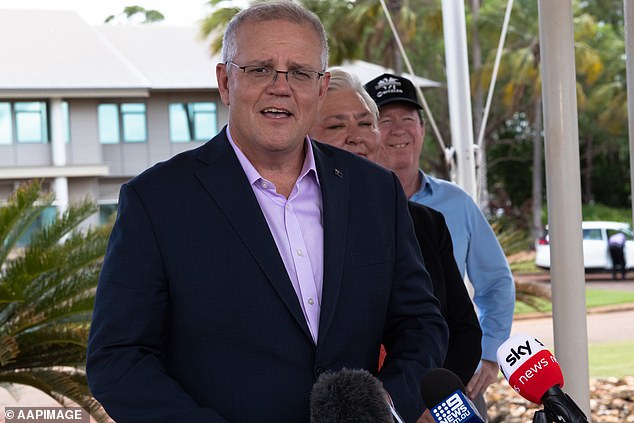 ‘I consider that these serious implications can be mitigated through having the restriction only temporarily in place, ie a pause, and by ensuring there are categories of exemptions.’

Mr Hunt said the advice was accepted because of the risk of deaths in Australia.

‘Ultimately these decisions are taken to save lives and protect lives. This was a decision to potentially prevent a third wave in Australia,’ he said.

Professor Kelly considers a pause on flights until May 15 as an effective and proportionate measure.

He believes a significant risk of a possible outbreak from Australia’s hotel quarantine system, particularly from arrivals from India.