The fiery Mankad debate was ignited yet again thanks to BBL star Adam Zampa’s failed attempt at the controversial dismissal – and now cricket’s chief lawmakers have confirmed the right call was made when it was disallowed.

The storm of controversy began when Melbourne Stars skipper Zampa attempted to remove the bails at the non-striker’s end before bowling in an attempt to take Renegades batter Tom Rogers’ wicket during a spicy Melbourne derby at the MCG on Tuesday night.

Zampa completed his action without releasing the ball, then took the bails off with Rogers out of his crease and celebrated defiantly by raising his finger and stomping straight back to his mark. 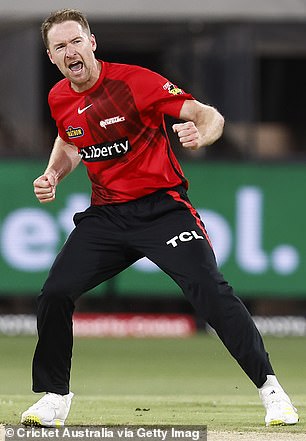 The umpires had other plans, however.

The on-field officials referred the case upstairs, with TV umpire Shawn Craig confirming Rogers was not out because Zampa had gone through his action, and passed his ‘highest point of release’ before taking the bails off.

The healthy crowd of 38,000 were quick to boo Zampa as they waited for the decision to be made.

The guardians of the laws of the game, the Marylebone Cricket Club (MCC), which is based at the iconic Lord’s ground in London, confirmed giving Rogers not out was the right decision.

‘The non-striker is no longer able to be run out in this way after the bowler has reached the highest point in his/her action,’ the MCC said in a statement.

‘This is so that the bowler cannot pretend to bowl the ball in order to tempt the non-striker out of his/her ground, go through his/her action, and then come all the way round and attempt a run out.

‘The umpires correctly gave the non-striker (Rogers) not out, as the bowler (Zampa) had not attempted the run out before going past the point at which he would normally be expected to release the ball.’ 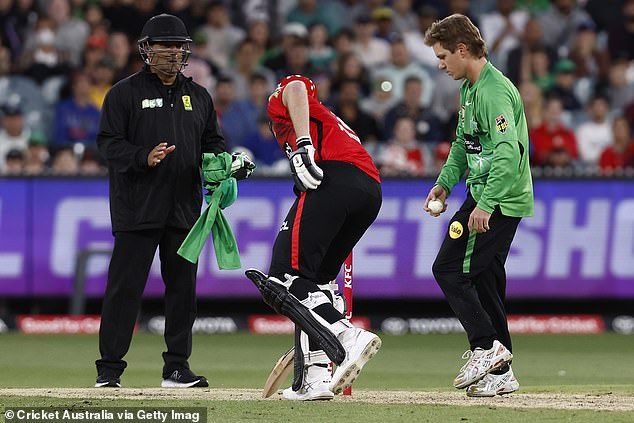 The MCC also offered some sage advice on how to avoid the drama altogether.

‘As with all incidents regarding the running out of the non-striker, the MCC would like to reiterate that the best way for non-strikers to prevent being run out is to remain in their ground until they see the ball released by the bowler,’ the statement said.

After the game, Zampa continued to insist he was in the right and may commit the controversial act again if necessary – despite his own coach slamming the Mankad.

Many have suggested the fiery character was just upset given Rogers’ quick running had allowed his partner Mackenzie Harvey – the more accomplished batter of the two – to get back on strike the ball before the Mankad attempt. 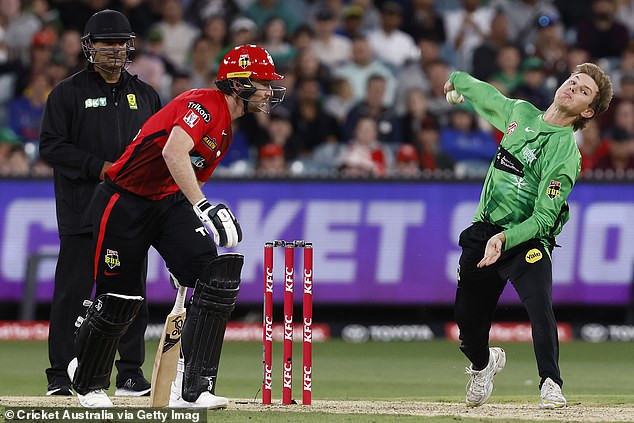 Adam Zampa bowls the ball, while Tom Rogers prepares to take off from the non-strikers end

Zampa seemed to confirm that was the case after the game, and even got himself a bit of sensationalist hyperbole in for good measure by suggesting Rogers was ‘halfway down the pitch’.

‘Tom Rogers the ball before used running out of the crease before I had bowled it to his advantage,’ he said.

‘I bowled a good ball to Mackenzie Harvey which should’ve been one (run instead of two) if he (Rogers) hadn’t done that.

‘So I thought that ball if he doesn’t want to be on strike then I’ll make it a bit easier for him.

‘I think I was well within my right to do it, it’s in the rule book, it’s well within the rules. I just got my technique wrong, he was almost halfway down the wicket.’

That was in direct opposition to the thoughts of his coach, David Hussey, current and former cricketers and fans all across the country. 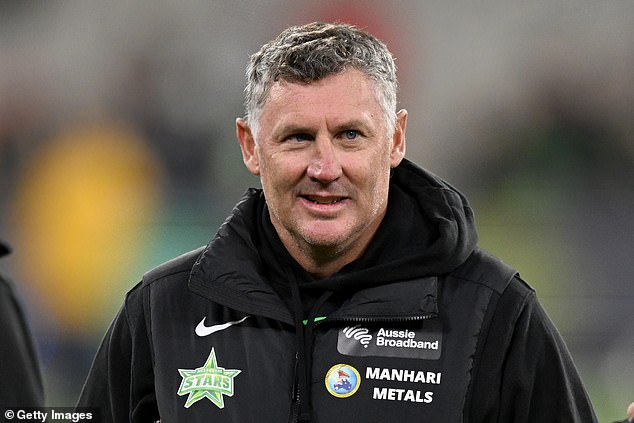 ‘If it had been given out, we would have withdrawn our appeal anyway,’ Hussey said on the Fox Cricket broadcast of the match, though Zampa didn’t appear to indicate he would have actually withdrawn the appeal.

‘It’s not the right way to play cricket.’

‘In front of a crowd of 38,000 – a lot of them kids on their school holidays – this was appalling from a ‘Captain’. Pointless, irrelevant wicket to attempt in the first place. He’s been somewhat saved by the decision being overturned. Deserves the bad press he’s gonna get,’ one fan wrote on Twitter.

Even controversial and outspoken politician Mark Latham, who was a decent opener at grade cricket level, had his say.

‘Adam Zampa: saving the world from climate change, one Mankad at a time. What a dog,’ he wrote on Twitter.

Extremely disappointing to see @StarsBBL head coach David Hussey not publicly supporting his own captain Adam Zampa in the run out controversy. Says a lot about how the team is travelling. #BBL12

Zampa getting booed by a predominately Stars crowd on more than one occasion, which probably shows how universally popular the Mankad is as a mode of dismissal #BBL12

I wonder is this the gentleman’s game I have loved for decades. The thing about cricket is there are the Laws and then the Spirit which transcends the Laws. The game has changed in the modern era for sure. I am non-judgemental. I just prefer the game at recreational level now

That being said, there are now a emerging selection of Aussie fans and former greats who believe bowlers are completely within their rights – though Zampa’s example is not exactly the best description of the controversial debate, it must be said.

‘How can one say Rogers is not taking advantage? He has left the crease before the bowler has reached his normal release point. Completed bowling action or not it’s out. Zampa well in his right,’ the Aussie limited-overs legend said.

Still blows my mind that there is a morality debate involved in running someone out. Cricket is the strangest thing.

Debate right now should be about terrible execution from Zampa…

I’m with Zampa. Batsman have been taking the piss for years on this

Should have been given out, and non-striker knew it straight away

No matter what the MCC rules say, it appears no one will ever agree on Mankadding, though Australians in particular mostly remain strong that it is a ‘weak’ way to get someone out, as Shane Watson told Daily Mail Australia earlier this year.

At the end of the day, Rogers got the last laugh, with his right-arm outswingers nabbing an incredible 5/16, and consigning the hapless Stars to yet another loss, this time by 33 runs.

The incident comes just days after Aussie superstar Mitchell Starc once again refused to Mankad on two occasions, despite being well within his rights too with South African batter Theunis de Bruyn being a metre out of his crease.

Before Starc could hit his delivery stride during an over at the MCG for Australia’s dominant win, he pulled out with de Bruyn several feet outside his crease.

It prompted a withering stare from Starc, who was quick to warn the batter of his obligations.

‘Just stay in your crease, it’s not that hard,’ Starc could be heard barking on the broadcast.

‘The line is there for a reason.’

Starc has been very vocal in the past about insisting he would never Mankad given he, like most Australians, sees the controversial act as against the spirit of the game. 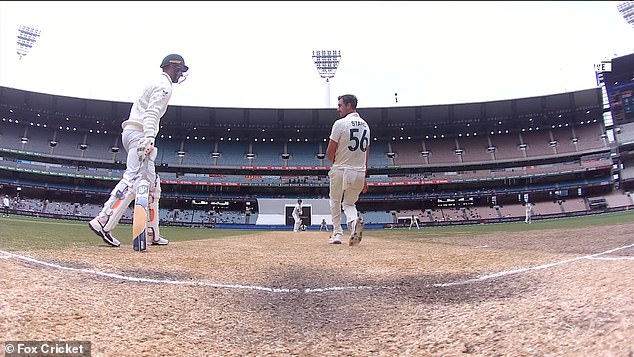 He said confirmed on Fox Cricket’s broadcast during a break in play that he wouldn’t have done it, but chastised de Bruyn for wandering so far down the pitch when he concedes a run and extra ball if his foot, as a bowler, isn’t behind the line.

‘He’s halfway down Punt Road, wasn’t he,’ he laughed on the broadcast, pointing to an iconic street near the MCG.

‘It’s bad enough in white ball cricket, I don’t know what the need is in red ball cricket.