A serious rush-hour crash involving a lorry and a road-sweeper on the M25 is causing eight-mile tailbacks at the Dartford crossing this morning.

Part of the Kent section of the M25 is closed anti-clockwise following the accident between junction five for the M26 and junction four for Orpington – adding hours to rush hour journeys this morning.

The road has been closed anti-clockwise since 5.25am while emergency services work at the scene.

It will be closed for the ‘foreseeable future’, say Highways England, who have promised to turn trapped traffic around.

Traffic was originally held on the clockwise carriageway from 6.20am, but it has since been reopened with a lane three closure. 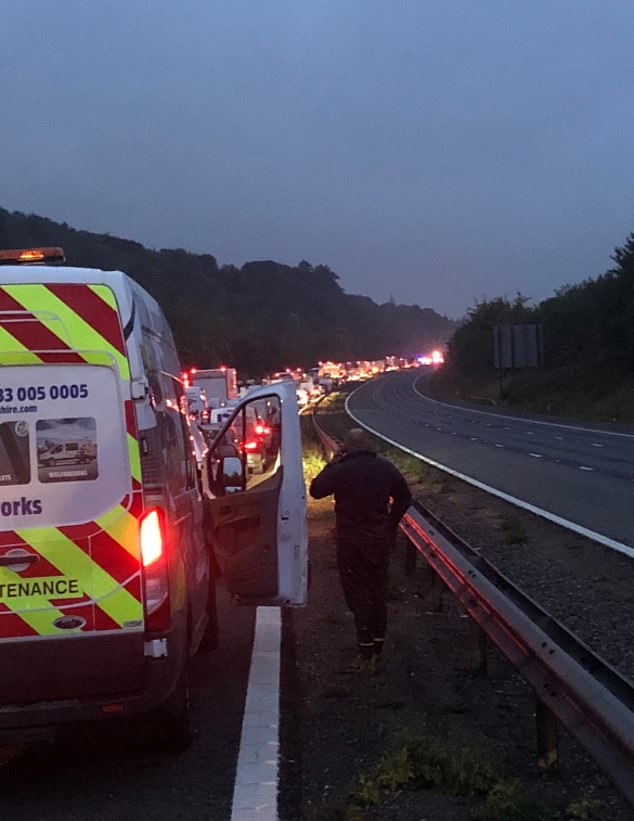 The road has been closed anti-clockwise since 5.25am while emergency services work at the scene. Traffic has also been held on the clockwise carriageway since 6.20am

There is currently eight miles of queues stretching beyond junction three for the Swanley Interchange and up to junction 1a at Dartford.

A diversion is in place via the A21, A25 and the A224 through Sevenoaks and Badgers Mount.

A spokesperson for Kent Police told MailOnline: ‘Kent Police was called shortly after 5.10am on Friday 25 September 2020 following a report of a collision between a lorry and a road sweeping vehicle between junctions 5 and 4 of the M25.

‘Emergency services are at the scene and the anti-clockwise carriageway is currently closed between junctions 5 and 4.

‘Motorists are advised to expect delays and, where possible, to use alternative routes.’