Saturday morning, with the sun streaming — beep — through our kitchen window. I had finished — beep — my work for the week, and was settling down to read a new — beep — book.

At first, I ignored the noise, thinking that — beep — by doing so, it would go away.

But the more I ignored it, the more — BEEP! — insistent it became, so that I couldn’t read more than a couple of sentences before — BEEP! — it struck again, and then I would have to go back to the — BEEP! — beginning.

Our tall house is fitted with four smoke detectors, one on each floor. These detectors are attached to the mains electricity, but each detector also has its own battery, so that if the electricity isn’t working, the battery will automatically kick in.

At least twice a year, a fit of beeping comes from the four smoke alarms in Craig Brown’s tall house warning they need a new battery

But the manufacturers have left nothing to chance. When the battery runs low, the smoke detector goes ‘Beep!’ — and goes on beeping until you replace the battery with a new one.

So this fit of beeping — Beep! — occurs at least twice a year, somewhere in the house, and it always takes me by surprise.

How do these detectors know when to create maximum irritation? Are they all in it together? Are they spying on me, waiting for me to settle down before — BEEP! — one of them gets to work? I’ve half a mind to report them all to David Icke.

Of course, a real man would be able to fix the problem in a couple of minutes, armed with a stepladder and a screwdriver and a new battery. But, sad to say, I am not a real man.

This means that I am always incapable of stopping the beeping. That’s not to say I don’t try. Each time, I am sure I can crack it. What could be easier?

I fetch a stepladder, a screw driver and a new battery. BEEP! I position the stepladder beneath the beeping smoke detector.

I climb the steps. BEEP! Balancing precariously, I look for the instructions on the side of the smoke detector.

BEEP! I locate the instructions — BEEP! — and bend my neck at a right angle from my body in order to read them, only to discover that they are printed in such tiny print, white on white, that they are — BEEP! — indecipherable.

More from Craig Brown for the Daily Mail…

So I curse — BEEP! BEEP! — and stick the screwdriver in the only slot available and wiggle it around hoping to unlock something inside. I then try swivelling the lid in a clockwise direction, and, when that fails, in an anti-clockwise direction.

And how does it choose to repay me? It just laughs in my face in the only way it knows: BEEP! BEEP! BEEP!

My usual solution is to wipe away my tears and call the electrician. But Saturday was the beginning of the bank holiday weekend, and I didn’t want to disturb him.

So, left to my own devices, I manned up, peforming the standard procedure — up the ladder, craning my neck for instructions, failing to read them, wiggling the screwdriver, bashing the smoke detector, cursing and cursing and cursing.

But however often I repeated this routine, the smoke detector remained shrilly defiant.

The beeping continued through Saturday, Sunday and Monday, all day and all night. Watching the television, it was as if every presenter — Huw Edwards, Alex Jones, Stacey Dooley — was suffering from CBD, or chronic beeping disorder. 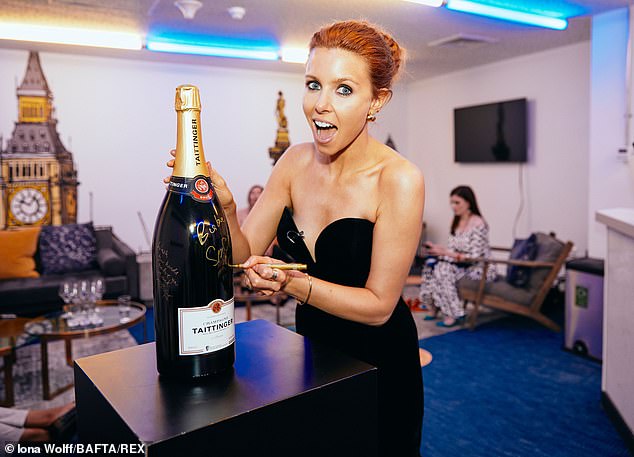 Watching the television, it was as if every presenter — Huw Edwards, Alex Jones, Stacey Dooley (pictured) — was suffering from CBD, or chronic beeping disorder

When we moved bedrooms, the beeps pursued us. They were crafty. Every time we left the house and returned, we would hear silence, and imagine the beeps had stopped. But then — BEEP! — off they would go, on and on and on.

By the end of Monday, I was plotting to burn the house down. That’ll teach the smoke detector a lesson it won’t forget! Fortunately, I held out until Tuesday, when Terry, our electrician, came round.

He fixed it so quickly that I didn’t see how he did it. I asked him to do it again, so that I’d know what to do in future.

Some time this winter, the beeping will start once more, and I will be exasperated all over again. But, for now, all is peaceful. BEEP! BEEP!