EXPRESS INFORMER > News & Politics > CRAIG BROWN: £20m for a car! Forgive me if I Rolls my eyes

House & Garden used to run a column called Me And My Car. One month, someone from the magazine phoned to ask if she could interview me for the column.

Her first question was: ‘What sort of car do you drive?’

I gave the matter some thought.

‘Are you still there?’ she asked.

‘Perhaps you didn’t catch the question. I just asked: what sort of car do you drive?’

‘Well, it’s definitely quite an old car. We’ve had it for some time,’ I replied. I sensed that she suspected I was playing for time.

‘Can you be a bit more specific?’ she said. ‘I was really wondering what make it is?’

‘If you hold on a sec, I’ll go out and take a look,’ I said. I then put down the phone receiver and nipped outside. On the way back to the phone, I kept repeating it to myself, so that I wouldn’t forget.

To be honest, I have as much interest in cars as I have in light bulbs or carrier bags. As long as they work, I’m happy. When they stop working, I get another, always second hand.

But you do need a tiny bit of know-how: for instance, I recommend remembering the colour and shape of your car: these will come in handy if you park it near lots of other cars, and hope to find it later.

Rolls-Royce probably didn’t have me in mind when they unveiled the world’s most expensive new car (pictured). ‘The Boat Tail convertible grand tourer’ was commissioned by an ‘anonymous billionaire couple’ at a cost of £20 million 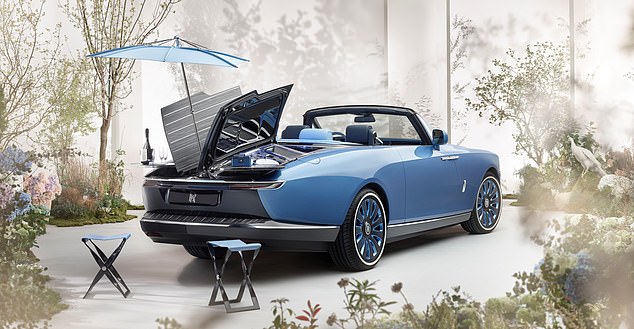 To me, it looks just like any other clean car, though for £20 million Rolls-Royce could have run to four doors rather than two

At the moment, I’ve had the same car — silver, medium-sized, four doors and a boot — for five or six years, and it’s behaved itself pretty well. But, sadly, the key-fob stopped working last year, so now every time I want to open the front door I have to winkle out the little metal key and unlock it manually.

Also, the inside handle on the passenger side snapped off last month, so now when my wife wants to get out I have to go round and open the door for her.

We once had a people carrier, which went fine until I drove it through a puddle. The resulting splash must have done something to the electrics, because from that point on, the windows kept going up and down, up and down, entirely at random, as if Mary Poppins had been tampering with it.

The garage said it was probably something wrong with the car’s computer, and that I should bring it in, so that their computer could check up on my computer. The moment computers are mentioned, you know that the writing is on the wall. Not long afterwards, I swapped that car for another, with stationary windows.

From all this, you may have gathered that I am not the sort of man to watch Top Gear or to greet another man with the words: ‘So what are you driving these days?’ 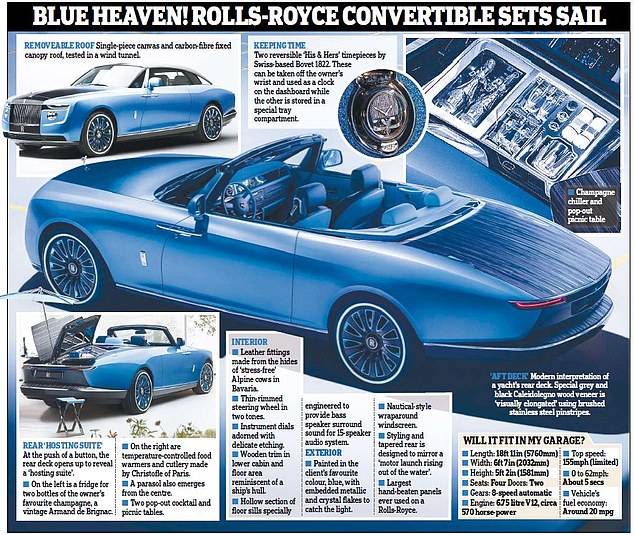 So Rolls-Royce probably didn’t have me in mind when they unveiled the world’s most expensive new car. ‘The Boat Tail convertible grand tourer’ was commissioned by an ‘anonymous billionaire couple’ at a cost of £20 million. To me, it looks just like any other clean car, though for £20 million Rolls-Royce could have run to four doors rather than two.

The billionaire couple are said to be keen picnickers. The boot of the vehicle houses a dinner set, rotating cocktail tables with matching chairs and an automatic parasol.

It also comes with a refrigerator that can rapid-cool the couple’s favourite champagne, Armand de Brignac (from £250 a bottle), to precisely 6c (43f).

Collecting expensive pens is another of the couple’s hobbies. ‘A particularly cherished Montblanc pen will reside in a discreetly placed, hand-crafted case of aluminium and leather, in Boat Tail’s glove box,’ boasts Rolls-Royce.

Rolls-Royce’s chief executive, Torsten Muller-Otvos, says: ‘When a Rolls-Royce coachbuilt commission is created it represents the moment a paradigm shifts, when preconceived notions of possibility are reset. And the outcome reflects a vision so focused that its significance transcends the world of motor cars.’

Come again? By now, you may be wondering why the billionaire couple could not have achieved the same effect by simply printing a couple of T-shirts with the twin slogans ‘Daft As A Brush’ and ‘More Money Than Sense’.