EXPRESS INFORMER > Science & Technology > Cows are getting high off industrial hemp in their feed, study finds

Our cows could be enjoying more than one type of grass, as a new study has found that they are getting high from cannabinoids in their feed.

Industrial hemp silage is a common ingredient in animal feed, and can contain a high concentration of psychoactive compounds.

The compounds could also be transferred into the milk they produce, with some samples showing levels that could impact human health.

The researchers, from the German Federal Institute for Risk Assessment, wrote: ‘Our study shows that feeding cannabinoid-rich industrial hemp silage made from leaves, flowers and seeds leads to a decrease in feed intake and milk yield in dairy cows.

‘A transfer of cannabinoids into foods of animal origin is conceivable when by-products of hemp production and the whole plant are used as feedstuffs.’

The researchers initially adapted their ten lactating Holstein Friesian dairy cows to new food by replacing up to 0.92 kg of their corn silage with low-THC industrial hemp silage (stock image)

The compounds could also be transferred into the milk they produce, as some samples taken showed levels that could impact human health. Pictured: THC and CBD concentration in milk for two cow groups in study

WHAT EFFECTS DID THE INDUSTRIAL HEMP FEED HAVE?

Feeding cows at least 0.84 kg of industrial hemp silage with less than 0.2 per cent tetrahydrocannabinol (THC) each day for six days had numerous effects.

They showed increased yawning, salivation and unsteady movements – all potential indicators of inebriation.

Some milk samples taken from the cows also showed levels of THC that could impact human health if ingested in a 24 hour period.

High levels of cannbidiol (CBD) were also present in the cows’ milk, however data was insufficient to draw conclusions on its heath risks.

Recent changes in global cannabis regulations have resulted in an increase in demand for industrial hemp for a variety of uses.

These include textiles, paper, ropes, insulation, bioplastic and biofuels, as well as animal feed.

Hemp contains cannabinoids, some of which, like tetrahydrocannabinol (THC) and its derivatives, can induce a psychoactive effect on animals and humans alike.

For the study, published today in Nature Food, the researchers aimed to determine if industrial hemp silage had an effect on dairy cows.

They also wanted to quantify how much, if any, was being transferred into the milk and whether it would pose a risk to consumer health.

The researchers initially adapted their ten lactating Holstein Friesian dairy cows by replacing up to 0.92 kg of their corn silage with low-THC industrial hemp silage – the ‘adaption’ period.

Then, for a six-day ‘exposure’ period, the cows were split into two groups and were fed either 0.84 kg or 1.68 kg of high-THC hemp dry matter per day.

They also recorded behavioural observations, like unusual muscle tremors, hypersalivation and changes to their coordination.

The cows’ milk, blood plasma and faeces were also regularly analysed to probe the extent of any transfer of THC derivative, cannabidiol or other cannabinoids.

While the low-THC variety had no effect on the cows during the adaptation period, both experimental doses of the high-THC variety resulted in behavioural changes.

And from the second day of exposure, the ten cows decreased their feed intake and milk yield. 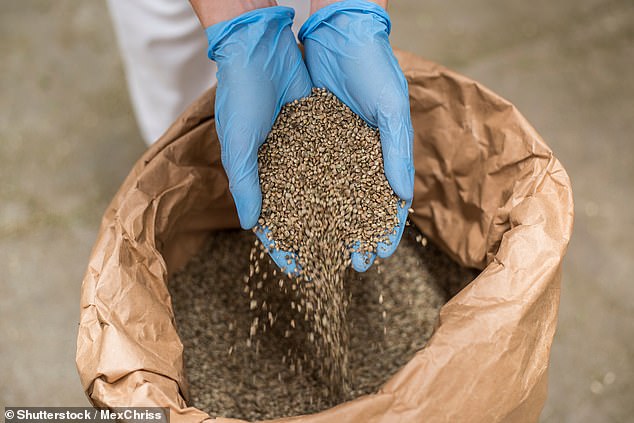 Hemp (pictured) contains cannabinoids, some of which, like tetrahydrocannabinol (THC) and its derivatives, can induce a psychoactive effect on animals and humans alike (stock image) 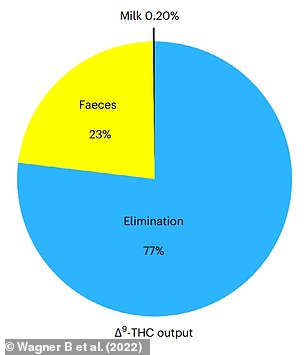 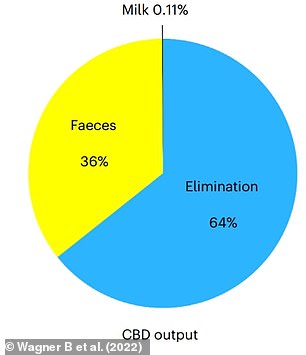 Left: Most THC is eliminated, some is excreted with faeces with only a small amount found in milk. Right: Compared to THC, CBD is excreted in higher amounts in the faeces

The researchers used laboratory separation methods and computer models to determine the level of cannabinoids transferred from to the milk from the feed.

While there was a less than one per cent transfer rate, the large quantities of food the cows ate meant substantial amounts were present.

Cannabidiol (CBD), which does not have psychoactive effects, was also present at  high amounts in the high-THC hemp, with a concentration of 8,304.1 mg per kg dry matter.

In addition, it was found in the cows’ milk, although data was insufficient to draw conclusions on its heath risks.

The researchers hope the findings will encourage further research on the effects of feeding cows industrial hemp.