By Oliver Salt For Dailymail.Com

Dallas Cowboys running back Tony Pollard is expected to spend three months out injured after breaking his leg in their playoff defeat to the 49ers, according to reports.

San Francisco ran out 19-12 winners against the Cowboys on Sunday night, heading through to the Conference Championships after a close-run battle at Levi’s Stadium.

It was a disappointing night for Dallas, with quarterback Dak Prescott failing to replicate the same form which ended Tom Brady and the Bucs’ Super Bowl hopes last week, and they are also reeling from a huge injury sustained by Pollard.

The latter was forced off with 1:24 of the first half remaining on Sunday after falling awkwardly under a challenge from 49ers cornerback Jimmie Ward, who left him crawling around the floor in agony after producing a hip-drop tackle. 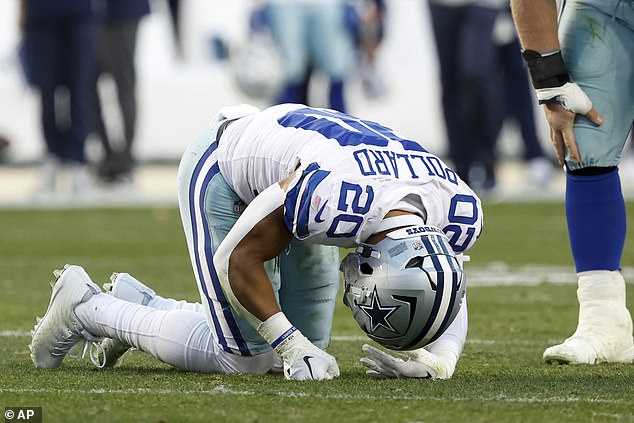 After Mahomes yesterday another textbook high ankle sprain mechanism for Tony Pollard. This one appears worse, additional concern for fracture. Hip drop tackle again too – not always a “dirty” play but a technique with high risk of injury to ball carrier pic.twitter.com/1Tl78OFkPo 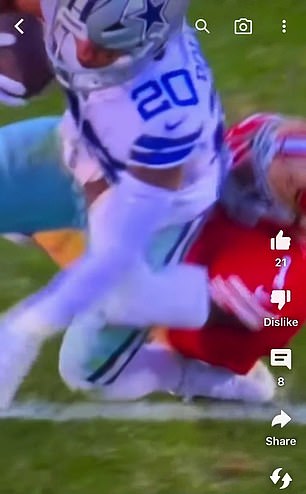 Pollard needed help walking to the sideline before being ruled out of the game, and ESPN are reporting that he suffered a fractured left fibula on the night.

The 25-year-old was seen wearing an Aircast on his left leg while being taken to the X-ray room at Levi’s Stadium, where it was confirmed he had broken his leg as a result of Ward’s tackle.

The usual timeframe of recovery for such an injury is around three months, coming as a major setback to Dallas given he is set to become a free agent in March.

Pollard’s injury nightmare comes after the best season of his NFL career, which saw him register 1,007 yards on 193 carries and score 12 touchdowns, surpassing the total he recorded in his first three campaigns. 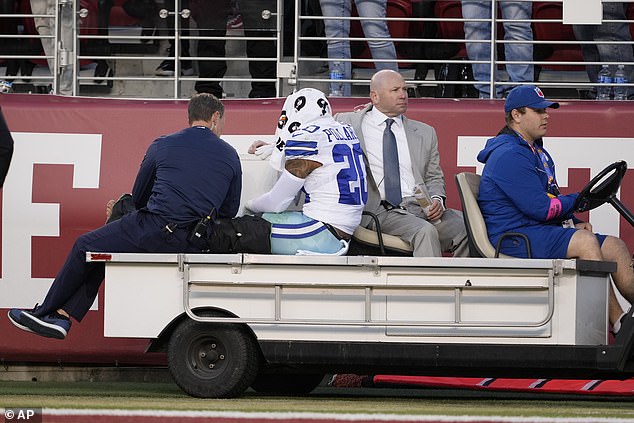 Before he limped out of Sunday’s game against the 49ers, he had six carries for 22 yards and two catches for 11 yards.

In his absence the Cowboys were forced to rely on Ezekiel Elliott and Malik Davis, with Elliott enjoying 10 carries for 26 yards while Davis failed to produce one.

‘His energy. His energy on the sideline, in the huddle, the way he gets guys going. He’s a special teammate, special player and obviously that one hurt. It hurt us.

‘[We] wasn’t able to create as many explosive plays as we planned, and I’m sure he would’ve been a big part of some of those had he not gotten hurt.’