President-elect Joe Biden received the first dose of his COVID-19 vaccine in Delaware on Monday, posing for the cameras as a local nurse administrated the shot.

‘There is nothing to worry about,’ he said as he reassured the public the vaccine was safe.

Biden also gave credit to President Donald Trump’s administration for its roll out of the cure. About 24 million people are expected to be given the first round of shots.

The president-elect thanked the medical staff and urged Americans to follow coronavirus restrictions during the upcoming holiday period, including wearing face masks and practicing social distancing.

Biden, wearing a dark long-sleeved turtleneck, rolled up his left sleeve to receive the Pfizer vaccine. He wore a black cloth face mask over a white N95 mask during his visit.

‘I’m ready,’ he told the nurse administrating the shot.

‘You just go ahead any time you’re ready,’ he told her after she applied alcohol to his bicep.

Biden had no visible reaction as he received the shot, which was dispensed by Tabe Mase, Nurse Practitioner and Head of Employee Health Services at ChristianaCare Hospital in Newark, Del.

He thanked Mase and elbow bumped her afterward. He also received his vaccine card and will need a second shot within 21 days. 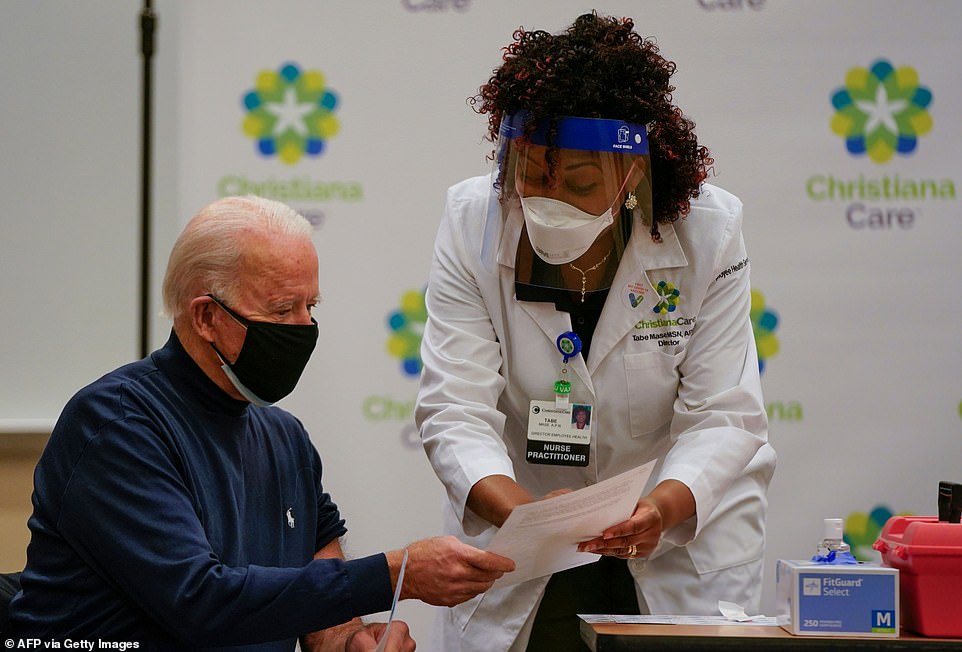 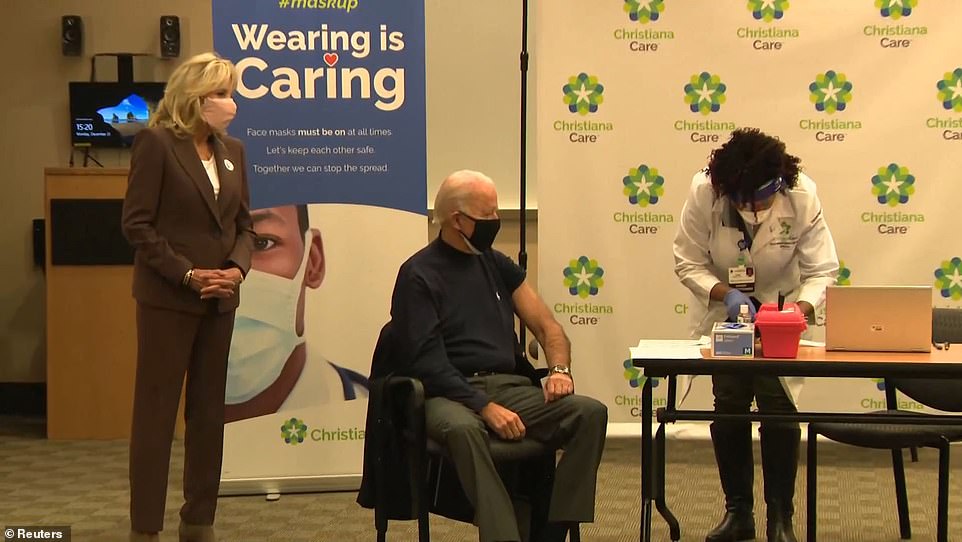 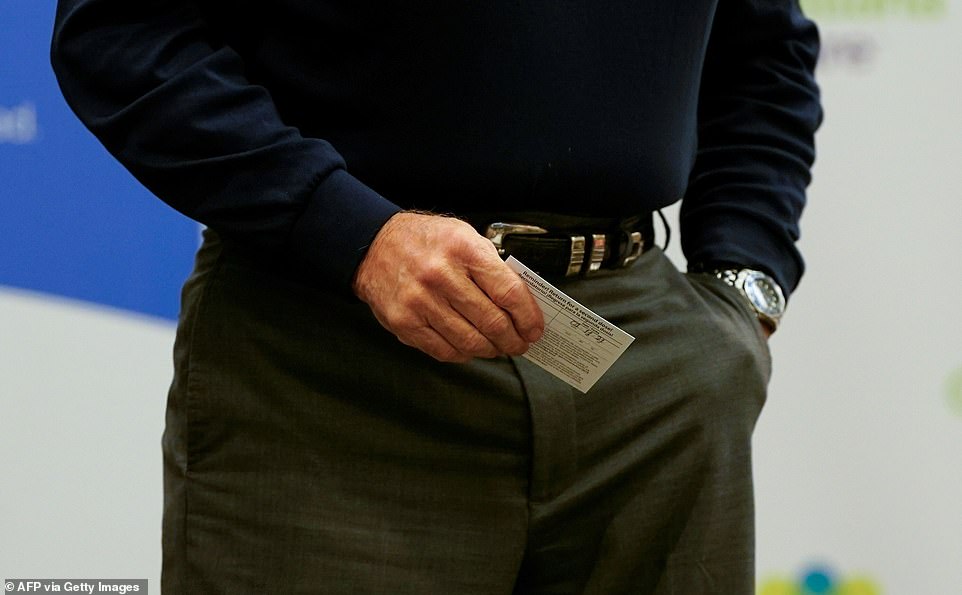 Rep. Ilhan Omar called it ‘disturbing’ that her fellow lawmakers, including her 31-year-old ‘squad’-mate Rep. Alexandria Ocasio-Cortez, were able to get vaccinated against the coronavirus before frontline workers and the elderly.

‘It’s now clear that we don’t have enough vaccines for everybody and there is a shortage of supply, we have to prioritize those who need it most,’ Omar tweeted Sunday. ‘That’s why it’s disturbing to see members be first to get vaccine while most frontline workers, elderly and infirm in our districts, wait.’

Ocasio-Cortez, who will be the youngest member of Congress until Republican Madison Cawthorn gets sworn-in in January, detailed getting the vaccine on her Instagram story.

AOC said she found out she and other members of Congress would have access to the vaccine because of the ‘continuity of governance’ plan, ‘basically a national security measure,’ she explained to her Instagram followers.

Dr. Jill Biden, received her first dose of the Pfizer vaccine – which requires two shots – earlier Monday, the office of the president-elect said without providing an explanation about why she did not receive a dose with her husband.

She was present, standing by the president-elect, as he received his shot. He grasped her hand before it was administered.

‘I’m looking forward to the second shot, so is Jill. She’s had her shot earlier today. She loves shots, I know,’ he said as Jill Biden laughed.

In brief remarks after receiving his dosage, Biden credited Trump’s administration with getting the Pfizer vaccine distributed. The U.S. added a second COVID-19 vaccine to its arsenal on Friday when the FDA approved Moderna’s for emergency use.

‘One of the things is I think the administration deserves some credit getting this off the ground with Operation Warp Speed,’ he said, giving kudos to his predecessor in the White House.

He said he received his shot publicly so people would know there is nothing to worry about in receiving it.

‘I also think that it’s worth saying that this is great hope. I’m doing this to demonstrate that people should be prepared when it’s available to take the vaccine,’ he said.

Biden also reminded Americans to take care over the holidays and noted this was just the beginning of the vaccination stage and a nationwide rollout would talke time.

‘The important thing is that it’s worth stating that, you know, this is just the beginning,’ he said. ‘It’s going to take time.’

He urged Americans to listen to the advice of experts like Dr. Anthony Fauci, the director of the National Institute of Allergy and Infectious Diseases.

‘In the meantime, I know I don’t want to sound like a sour note here, but I hope people listen to all the experts and Dr. Fauci talking about the need to wear masks during this Christmas and new year’s holidays. Wear masks, socially distance, and if you don’t have to travel, don’t travel. Don’t travel. It’s really important,’ Biden said.

Fauci will receive his vaccine on Tuesday, according to reports, and will given Moderna’s version of it. 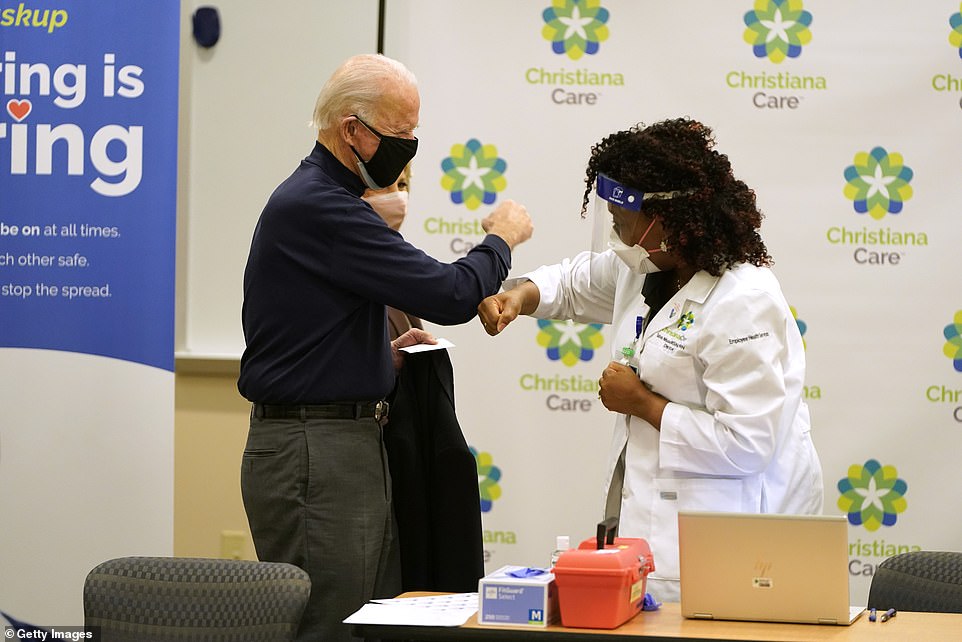 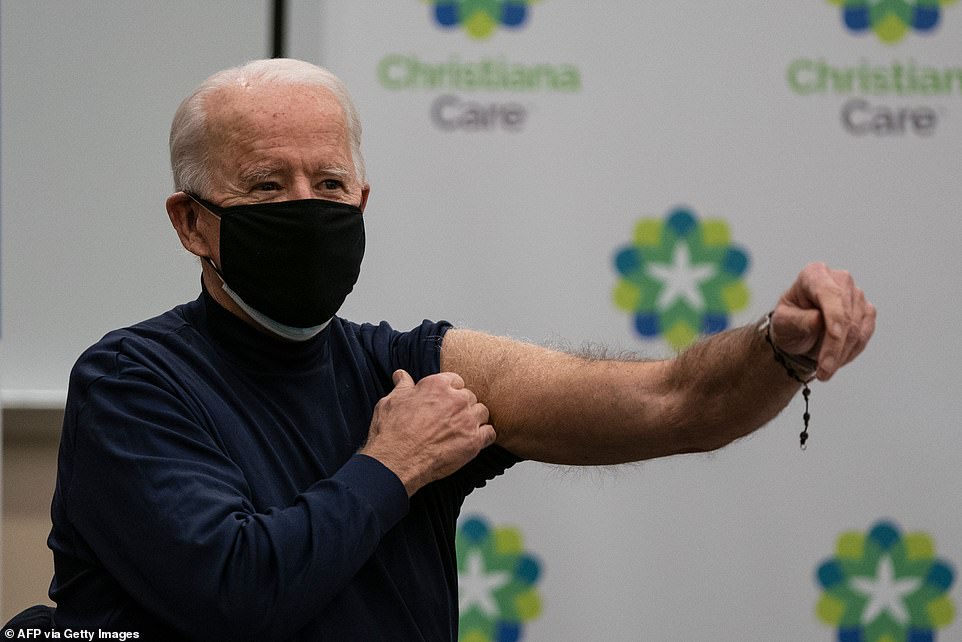 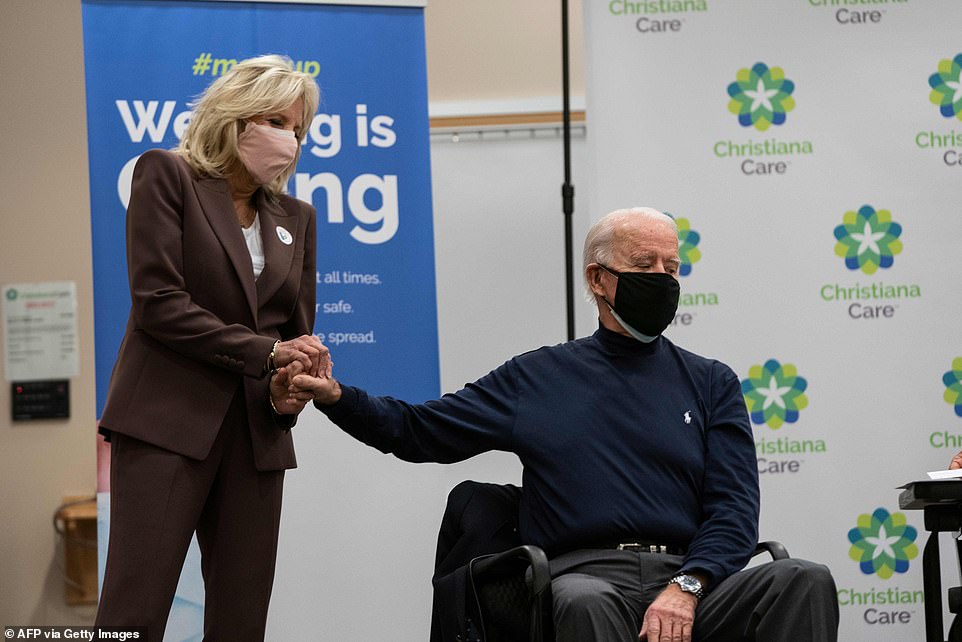 Joe Biden holds Jill’s hand ahead of his shot 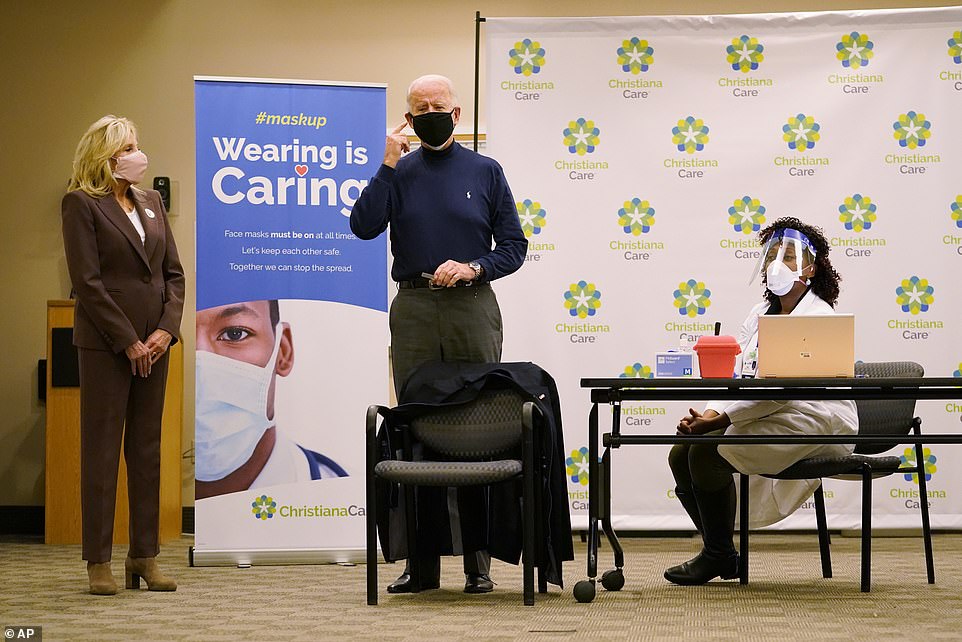 Afterward, Biden gave credit to the Trump administration for its rapid roll out of the vaccine

The country is not out of the woods yet, Biden noted. He has previously warned of a ‘dark winter’ as the country battles the pandemic. Numbers are on the rise in the United States with more than 3,000 people dying a day from COVID.

‘We’re still in the thick of this,’ Biden said. ‘It’s one thing to have the vaccine show up at a hospital. It’s another thing to get the vaccine from that vial into a needle, into an arm. And there are millions of people out there that are going to need this. Front line workers first. But I just want to thank everyone for all that they’ve done. You’re some real heroes,’ he said.

The president-elect followed the lead of Vice President Mike Pence, Speaker Nancy Pelosi and other lawmakers in getting the shot publicly in order to show it’s safe.

Jen Psaki, the incoming White House press secretary, told reporters last week that Vice President-elect Kamala Harris and her husband Doug Emhoff will be getting vaccinated the week after the Bidens, as healthcare advisers urged Biden and Harris to stagger their doses in case of unexpected side effects or a rare allergic reaction.

Biden received his shot the day after his nominee for U.S. Surgeon General said the general public might not get a coronavirus vaccine until mid summer or early fall – months later than had previously been touted.

Earlier this year, officials from the Trump administration had suggested that an American who wants a vaccine could get one between April and June 2021.

However, Dr Vivek Murthy said that timeline is not practical.

‘I think when it comes to the vaccine timeline, we all want the vaccine to be delivered as quickly, as fairly as possible, and you can be sure that every day and night, myself and others on the Biden team are working toward that,’ Murthy told NBC News’ Meet The Press on Sunday.

‘But we also want to be realistic about the timeline’.

He added that it was possible that the vaccine – which is currently being given to high-risk individuals including frontline healthcare workers and nursing home residents – could be available in the spring to those at lower risk of contracting COVID-19.

However, for this to happen ‘that would really require everything to go exactly on schedule,’ Murthy said.

‘I think it’s more realistic to assume that it may be closer to mid-summer, early fall when this vaccine makes its way to the general population.’

This means the disruption to people’s lives – that many thought would be over by Easter – will continue for several more months. 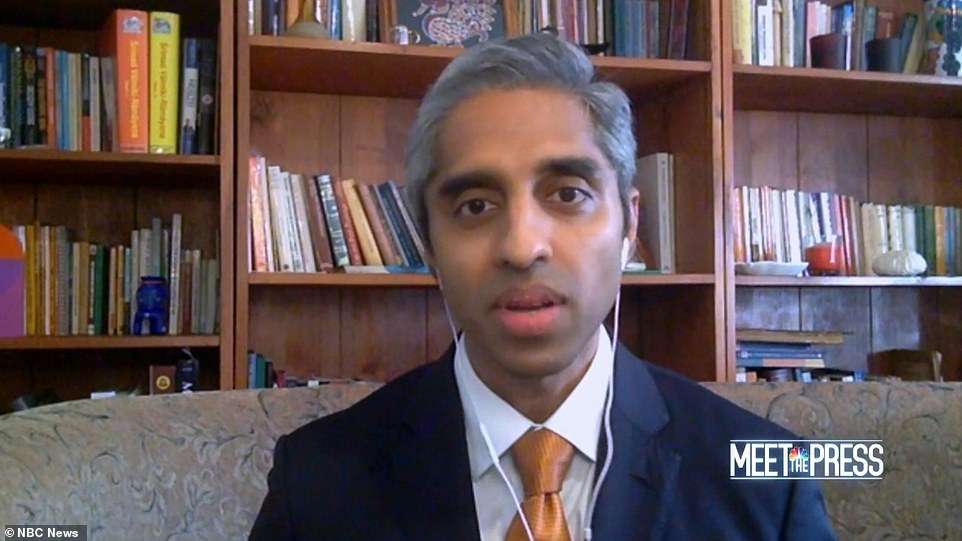 In an interview on NBC on Sunday, Joe Biden’s surgeon general nominee Dr Vivek Murthy said the majority of Americans may not be able to get a vaccine until midsummer or early fall. Pictured: Murthy on NBC’s Meet the Press on Sunday 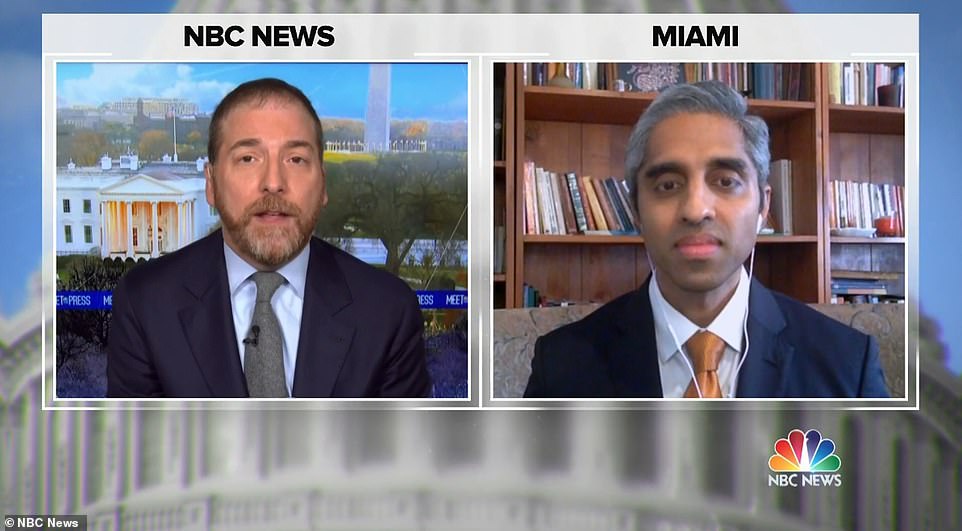 Murthy said an earlier timeline for widespread vaccination is not ‘realistic’ unless every step in the rollout goes smoothly. Pictured: Murthy and host Chuck Todd (left) NBC’s Meet the Press on Sunday

Fauci has said on numerous occasions that he believes the general public will get vaccinate around March or April 2021.

It could be ‘sometime by the end of March, the beginning of April, that the normal healthy man and woman in the street who has no underlying conditions would likely get it,’ the nation’s top infectious disease expert told MSNBC last week.

He said he believes by late spring or early summer, the U.S. could reach potential herd immunity.

Lieutenant General Paul Ostrowski, director of supply, production, and distribution for Operation Warp Speed, said last month that every American who wants a COVID-19 vaccine can get one by June.

Adm Brett Giroir, the assistant secretary for health at the Department of Health and Human Services (HHS), has made similar comments.

In the first stage of the vaccine rollout, most states followed the Centers for Disease Control and Prevention (CDC) recommendation that healthcare workers and nursing home residents get the very first doses.

On Sunday, a CDC advisory panel recommended frontline essential workers and elderly Americans should be next in line to received a COVID-10 vaccine.

The panel voted 13-1 in favor of the move that, in all, would make 49 million people eligible to receive the vaccine in the next round, known as Phase 1B.

Several government officials and lawmakers have received it in order to establish a continuity of government. 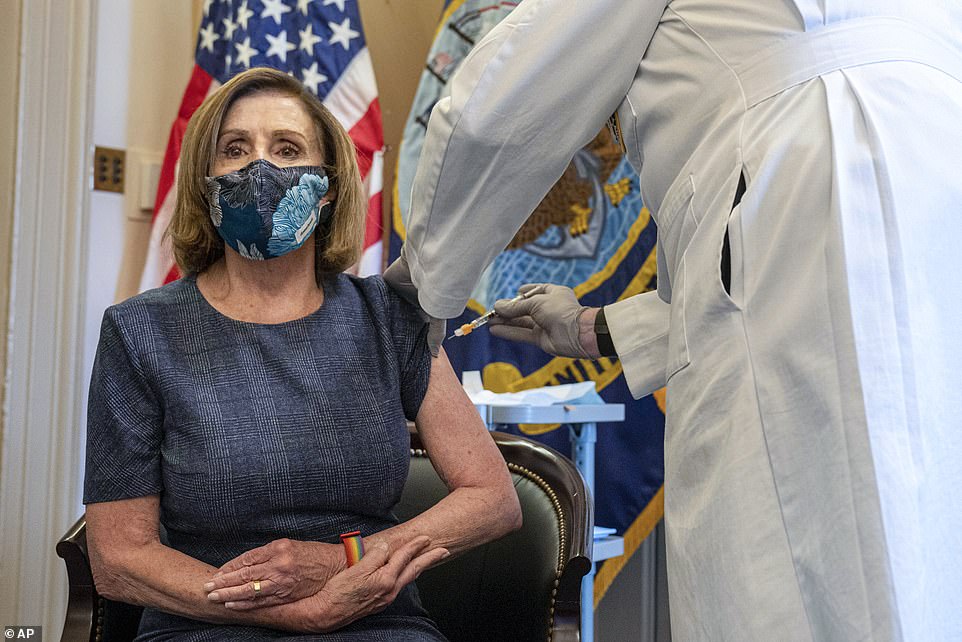 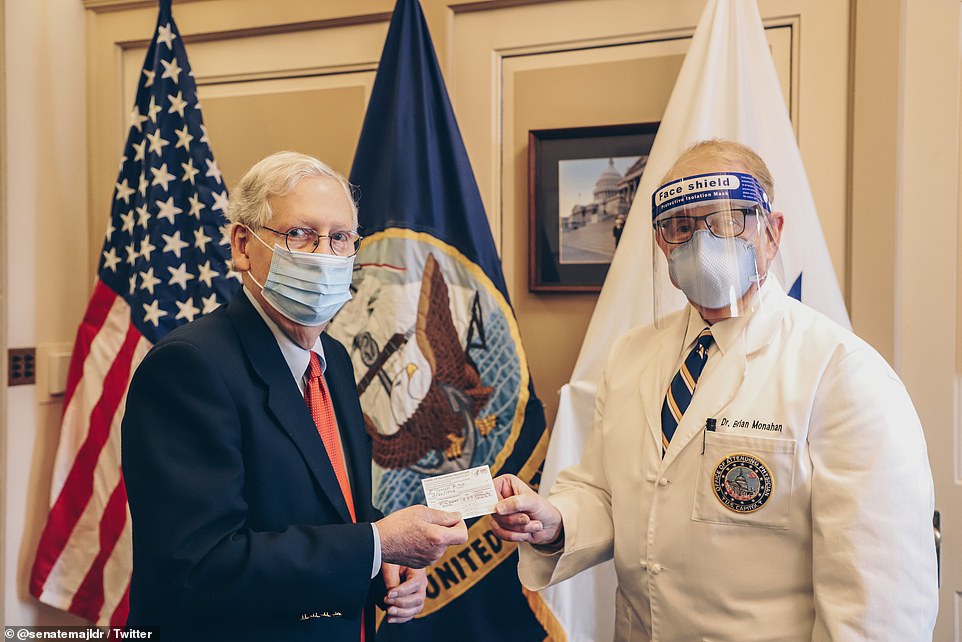 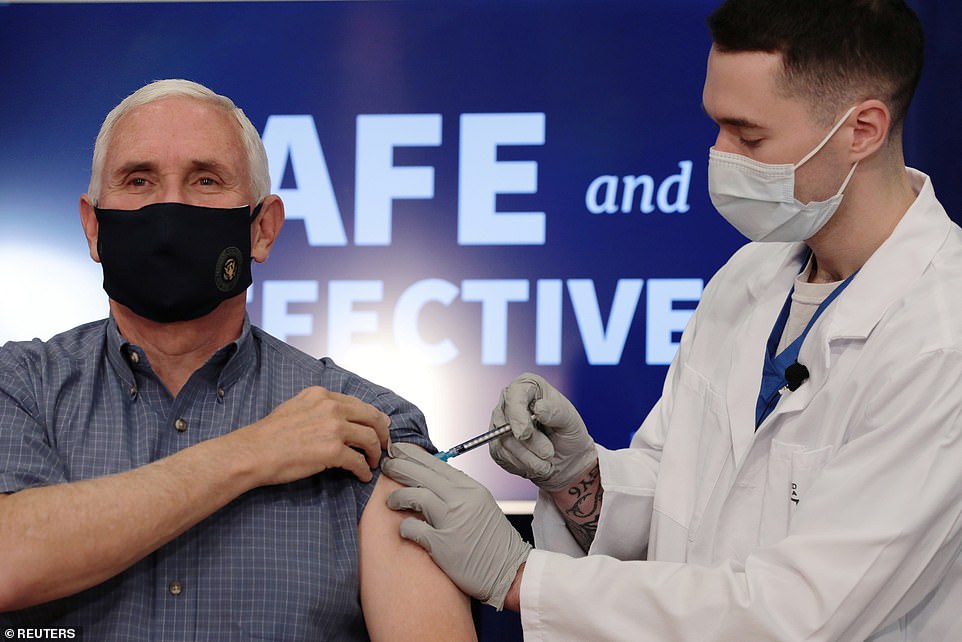 Vice President Mike Pence became the highest-ranking government official to get the coronavirus vaccine, getting the first dose Friday morning in Washington, D.C.

In a statement Thursday, Pelosi said: ‘We must all continue to embrace testing, tracing, treatment, mask wearing and social distancing as the vaccine is being distributed. It is imperative that we ensure that the vaccine will be free and delivered in a fair, equitable manner to as many Americans as soon as possible and that we accelerate its manufacture, including by invoking the Defense Production Act.’

McConnell said that as a polio survivor, he is especially aware of the ‘extraordinary promise of hope’ vaccines offer.

He said he’ll continue to wear a mask and follow other health guidelines.

Dr. Brian Monahan, the Capitol physician, sent a letter to lawmakers last week urging them to make appointments with his office to be vaccinated.

‘Once we have completed the vaccination of the Members, we will follow a process to identify the continuity-essential staff members,’ Monahan said, adding that his office would continue with appointments ‘until the small vaccine supply is exhausted.’

Pence became the highest-ranking U.S. official to get the vaccine, doing so at the Eisenhower Executive Office Building alongside his wife Karen and Surgeon General Jerome Adams Friday morning.

President Donald Trump and first lady Melania Trump tested positive for COVID-19 in October and so aren’t slated to the get vaccine right away.

The first family likely still has antibodies from his October infection, the U.S. Surgeon General has said, after questions were raised as to why the president had not taken the lead in getting the vaccination.

Dr. Jerome Adams said there was a good reason for Trump not to have received it yet.

‘From a scientific point of view, I will remind people that the president has had COVID within the last 90 days,’ Adams told CBS’ Face the Nation on Sunday.

President Trump also pushed back on reports that White House staff would be able to get some of the first vaccine doses in the U.S., as frontline medical workers, and then the elderly, are the top priorities.

‘People working in the White House should receive the vaccine somewhat later in the program, unless specifically necessary. I have asked that this adjustment be made. I am not scheduled to take the vaccine, but look forward to doing so at the appropriate time. Thank you!’ Trump tweeted Sunday night.