NHS bosses were today given the green light to relax Covid-controlling restrictions in hospitals to boost efforts in clearing the record backlog.

Officials dropped guidance on social distancing, which the health service adopted at the start of the pandemic in an effort to keep patients safe.

Social distancing can be reduced to 1m in some low-risk areas of hospitals, which no longer need to be deep-cleaned between uninfected patients.

And some patients who are fully-vaccinated and asymptomatic no longer need to test negative on a PCR and self-isolate for three days, as long as they lateral flow says they are free of the virus on the day of their procedure

The guidance, issued by the UK Health Security Agency (UKHSA) — which replaced the disbanded PHE — is already being followed in some hospitals.

Health Secretary Sajid Javid claimed the recommendation is only possible because of the ‘phenomenal vaccination campaign’.

He said: ‘We can now safely begin to relieve some of the most stringent infection control where they are no longer necessary to benefit patients and ease the burden on hardworking NHS staff.’

NHS hospitals are under record pressure after the pandemic drastically interrupted patient care.

The pandemic-fuelled backlog for routine operations hit 5.6million at the end of July. The figure is the highest figure ever recorded, is set to keep rising and will take years to clear.

The Prime Minister promised an extra £10bn a year for the NHS in a tax raid aimed at helping to clear the mammoth waiting list.

This came on top of a previously announced £5.4billion cash boost.

The cash will go towards millions more checks, scans and procedures and boosting NHS capacity for routine operations.

The number of patients waiting for routine hospital treatment hit 5.6million in July, the highest figure since records began in 2007. And health chiefs have warned the backlog is going to get much worse before it gets better, with projections that it could soar up to 13million by the end of the year if no action is taken 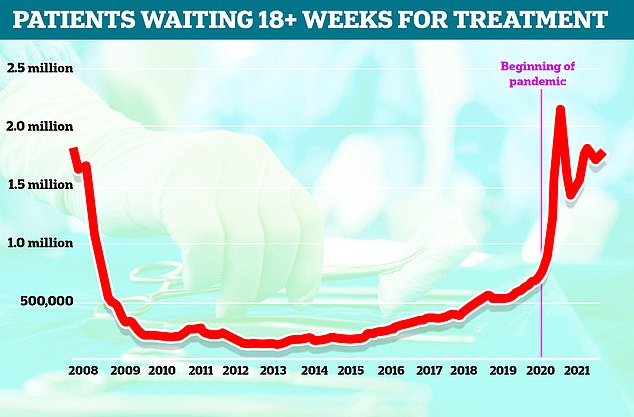 Patients forced to wait more than 18 weeks for routine surgery – the maximum time someone should wait under the NHS’s own rules – reached 1.7million in July, the highest level in four months 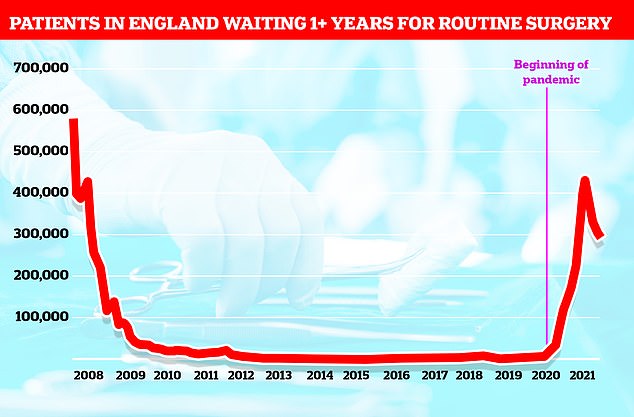 Some 293,000 people had been waiting more than a year for treatment on the NHS by July this year, figures showed. This was down slightly on last month when there were 304,803 people on the list, but still almost three times the same levels last year. The list has surged after the pandemic forced hospitals to turn over whole wards to fighting the virus 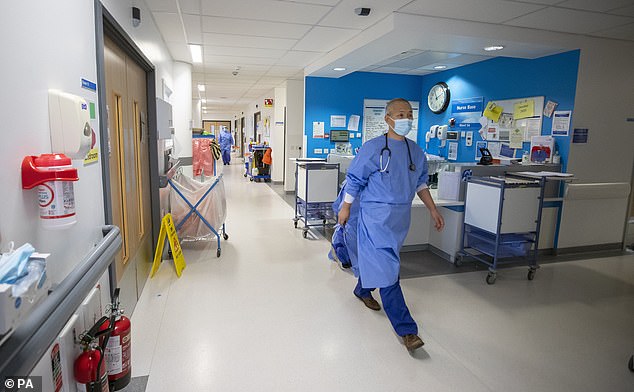 The UK Health Security Agency, which published the new advice, says less stringent measures can be implemented in hospitals because because an increasing proportion of the population is vaccinated and more is known about how the virus can be contained

UKHSA said the ‘pragmatic changes’ will ease Covid-related pressures on hospitals in the coming months as the country learns to live with the virus.

It said social distancing can be dropped from 2m to 1m in hospitals where patient access can be controlled, such as in wards but not A&E, mirroring a message dished out to households by No10 in June.

A minimum 1m distance is already recommended by the WHO in healthcare settings, although it says this should be increased ‘whenever feasible’.

And under the relaxation of measures, some patients will no longer need to show a negative PCR test or isolate for three days before getting elective procedures, such as hip and knee operations.

Only patients deemed at low-risk, who are fully-vaccinated, asymptomatic and have tested negative from a lateral flow test on the day of their operation, will be exempt.

UK’s daily Covid cases rise 5% in a week to 37,960 as hospital admissions and deaths continue to fall

Britain’s daily Covid cases have risen by 5.2 per cent on last week while deaths have dropped by almost a fifth, official figures revealed today.

Meanwhile, another 40 deaths were also posted, down slightly from the 49 lab-confirmed victims registered the week before. No UK-wide hospitalisation figures were available but data from England suggest they are falling by around 15 per cent week-on-week.

Both measures lag several weeks behind cases because of how long it can take for infected patients to become seriously ill.

The figures come amid fears a fourth wave is just around the corner, with official data suggesting children have started to pass the coronavirus to their parents.

Department of Health statistics show England’s infection rates have been rising for a fortnight, following the return of millions of pupils to classrooms at the start of the month. But infections were only increasing in youngsters, bolstering evidence that the reopening of schools was to blame.

Government data now shows, however, rates have started trending upwards in 35 to 39-year-olds, 40 to 44-year-olds and 45 to 50-year-olds, suggesting that children may have taken the virus home with them.

Patients who are a close contact of someone who has tested positive will still need to follow self-isolation and take the more accurate test.

And hospitals can return to their pre-Covid cleaning procedures.

There is ‘limited evidence’ of the virus being transmitted from surfaces, UKHSA said.

But a decision on whether to implement these less stringent measures will be down to local care providers based on factors including their capacity and ability to keep their wards well-ventilated.

Staff working in areas where these less stringent measures are in place should be double-jabbed, asymptomatic and not a contact of a Covid-infection person.

And healthcare workers will still need to comply with current rules on asymptomatic testing.

The UKHSA is now looking at relaxing of rules among other healthcare services, such as at dentists and in ambulances.

Dr Jenny Harries, UKHSA’s chief executive said: ‘We have reviewed the existing Covid IPC evidence based guidance and made a series of initial pragmatic recommendations on how local providers can start to safely remove some of the interventions that have been in place in elective care specifically for Covid.

‘This is a first step to help the NHS treat more patients more quickly, while ensuring their safety and balancing their different needs for care.’

Mr Javid said: ‘As ever more people benefit from the protection of our phenomenal vaccination campaign, we can now safely begin to relieve some of the most stringent infection control where they are no longer necessary to benefit patients and ease the burden on hardworking NHS staff.

‘I thank Dr Jenny Harries and the UKHSA for their recommendations, and look forward to their assessment of what further steps can be taken in other healthcare settings including in primary care.’

Dr Simon Clarke, a cellular microbiologist at the University of Reading, said the recommendations are ‘generally reasonable and should be implemented where they can improve access to healthcare’.

Removing mandatory PCR tests for double-jabbed, low risk patients ‘reflects the level of protection that the vaccine provides against severe disease’, he said.

But he warned false negative test results will mean some asymptomatic infected patients ‘will be put on wards with vulnerable patients’.

And the end of enhanced cleaning ‘smacks of corner cutting’ because SPI-B’s advice ‘does not mean it is unimportant and can safely be cut’, Dr Clarke said.

And SPI-B behavioural scientists, not virologists or microbiologists, so ‘are unlikely to be qualified to make such judgements’ and their advice is based on a paper which says more studies into surface transmission is needed, he said.

Dr Clarke added: ‘Enhanced cleaning is common in healthcare settings which are exposed to influenza patients so it seems that penny pinching by removal of enhanced hygiene measures may well lead to transmission of Covid and other infections in our hospitals.’