A man who turned his house into a winter wonderland to raise money for a hospice has been visited by police while he was dressed as Santa Claus after he was reported for flouting social-distancing rules.

Mike Denaro decorated his home in Hindley, Wigan with Christmas decorations including fairy lights, lasers, festive acrylic figures and a snow machine to fundraise for a local charity during the pandemic.

Attracting visitors from miles away, he asked people to make a small donation which he’s collecting for Wigan and Leigh Hospice.

Mr Denaro said he reached an agreement with Wigan Council and a local police officer to ensure the gatherings outside his home were Covid-secure – and even put Santa footprints on the floor to help with social distancing.

But despite the precautions, the police have continued to visit him several times to enforce coronavirus curbs on public gatherings.

On one occasion, three police cars turned up on his street to shut down the public gathering while he was dressed as Father Christmas.

Video shows the exchange between officers and Mr Denaro on December 12, which was posted on Facebook and shared more than 300 times. 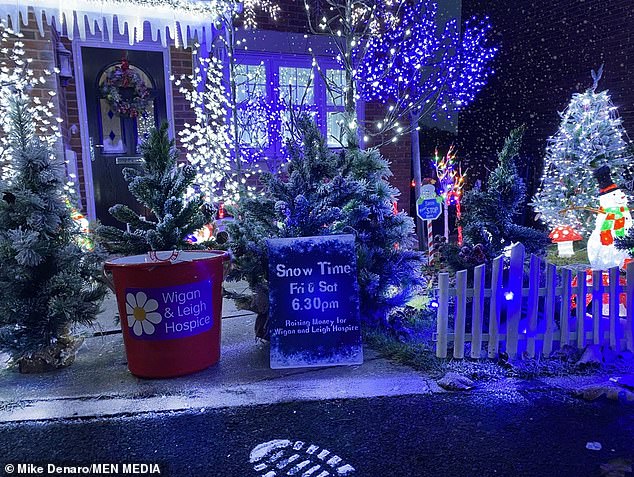 Mr Denaro decorated his home in Hindley, Wigan with Christmas decorations including fairy lights, lasers, festive acrylic figures and a snow machine to fundraise for a local charity

Mr Denaro said police then went away 40 minutes later, after they got on the radio and learned the gathering had been arranged with the council.

He believes he was reported by neighbours and hit out at the ‘Grinches’ at Greater Manchester Police, calling their interference ‘madness’ and a ‘nightmare’.

‘Surely they have better things to do,’ Mr Denaro said. ‘It’s not a rave, it’s Santa Claus giving out chocolates to kids, who are donating money to Wigan and Leigh Hospice.

‘It’s been a rubbish year for everybody and we’re trying to make it better but GMP seem to be Grinches that want to spoil the fun.’

He added: ‘We’ve had loads of people rocking up but it’s all at safe distances.

‘The council’s Covid team have come out and said they’re happy for it to continue as long as people social distance and a local bobby said pretty much the same thing – that it’s for charity and they weren’t going to be the Grinch by stopping it.

‘We’ve even put Santa’s footprints on the floor to help with social distancing.

‘It’s madness. Someone’s having a hot chocolate in the street and there’s a guy dressed as a turkey and they send three police cars. 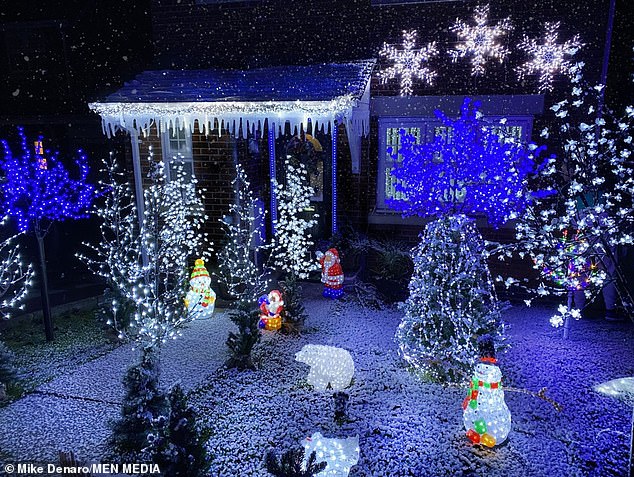 Attracting visitors from miles away, Mr Denaro asked people to make a small donation which he’s collecting for Wigan and Leigh Hospice

‘It took them 40 minutes to get on the radio and find out that we had already arranged it and they could be doing so much better things with their time.’

Wigan Borough, along with the rest of Greater Manchester, is is classed as a very high-risk area and is currently in Tier 3 lockdown.

Restrictions include a Rule of Six limit on outdoor public gatherings and the closure of hospitality venues unless they can provide takeaway services.

A spokesman for Greater Manchester Police said: ‘Shortly after 2.35pm on Saturday December 12, police received a report of a planned gathering due to take place later that day on Fairman Drive in Hindley, Wigan.

‘Officers attended the address and advised residents of the importance of adhering to current Government guidelines.’

Sergeant Wesley Walker, of GMP’s Wigan District, added: ‘We continue to take a measured approach to any reports of possible breaches of social restrictions.

‘Following a report of a planned gathering, three officers attended Fairman Drive and spoke with a number of residents, taking care to explain the guidelines and encourage them to comply with current Government restrictions.

‘There was no enforcement action taken against any persons present and our officers left a short time later after positively engaging with the local residents.’