A new blood test that can predict if Covid patients are likely to fall critically ill is in the pipeline, experts claimed today.

Researchers in the US have discovered warning signs in the blood that signal which patients may go on to develop severe symptoms.

They found a particular type of white blood cell is elevated in people who suffer the worst illness with Covid.

The George Washington University experts claim their find could pave the way for a simple blood test.

They say it could be used in hospitals so doctors can prioritise who needs care most — potentially saving lives.

Researchers will seek emergency use authorisation from the US Food and Drug Administration if further studies show the test is safe and effective.

Currently, the only approved Covid tests in the US and UK are lab-based PCR tests and rapid lateral flow tests — but neither indicate how ill a patient might become.

The experts did not say how long it takes to get back results from the tests or exactly how accurate they are at predicting severity.

The first Covid test to tell people whether they will need hospital treatment for the virus has been developed, a study claimed today. Pictured: Professor Timothy McCaffrey, who led development of the test 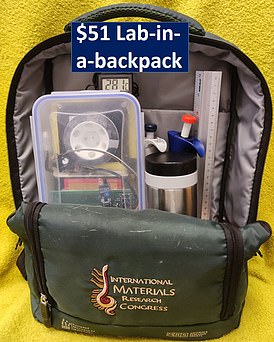 Experts have developed a portable ‘lab in a backpack’ for Covid testing in disaster zones and refugee camps.

The test uses saliva rather than the invasive nasal swabs and it takes 90 minutes to process six samples.

It uses a new type of chemical testing called transcription loop-mediated isothermal amplification that produces similar sensitivity to the PCR tests, they said — but at a fraction of the time and cost of current options.

The researchers did not specify how accurate the tests are at identifying positive or negative results, or compare them to current PCR or rapid lateral flow options.

They say the test could be rolled out to schools for further research before they develop a commercial test, which could cost only £10 once mass-produced.

The study, published in PLOS One, looked at 38 infected people from November 2020 to March 2021 in the Washington University Hospital.

The participants’ symptoms ranged from asymptomatic to requiring intensive care treatment.  Their average ages ranged from 47 to 62.

Seven were incidental patients, testing positive at hospital but with unnoticeable or mild symptoms.

Another seven were ‘moderate’ patients — admitted for the virus but not in need of a respirator. Twenty-four were patients on respirators.

The researchers found there were visible changes in the red blood cells of people with Covid but changes to the white blood cells were the most noticeable.

People with more severe forms of the virus saw a 25-fold increase in the most common type of white blood cell, called neutrophils,  during illness.

They also had a decrease in T-cells — a type of white blood cell that gives them protection against a specific illness.

The ratio between the two types of cell was more than double in critical patients, compared to those suffering less severe illness.

The finding backs up previous studies that suggested the ratio between the cells is one of the best ways to determine severity.

Using these markers, they were able to develop a test that would indicate the likelihood of a patient developing more severe Covid.

Professor Timothy McCaffrey, lead researcher on the project, said: ‘This test could prove very valuable during the pandemic, especially as variants continue to spread and doctors need to be confident in identifying the problem and providing effective treatment

‘When we sequence whole blood RNA, we’re given a fuller, more dynamic picture of what’s happening inside the body, and our test helps identify those who need the more aggressive treatments.’

His previous research also found similar RNA biomarkers for inflammatory conditions including pneumonia and appendicitis, which could also be identified with the test.

This means the tests will still be useful after the pandemic is over or Covid falls behind other illnesses in prevalence, he said.

Professor McCaffrey said: ‘Beyond the current pandemic, our technique would be able to detect any infection with a high degree of accuracy.

‘That has applications for all sorts of conditions wherein doctors diagnosing patients need to quickly rule in or rule out whether they are dealing with an infection or something else.’