Coronavirus hospital rates have reached record highs in Australia as the country grapples with a ‘twindemic’ of Covid and flu.

There were 5,450 patients in hospital with Covid on Monday, official figures show, eclipsing the previous record of 5,390 during the first Omicron wave in January.

That figure has soared from about 3,000 a month ago, amid the spread of the highly infectious but equally mild BA.4 and BA.5 subvariants.

Australia was hailed as a Covid success story early in the pandemic when it managed to keep cases at virtually zero by turning itself into a hermit state with repeated lockdowns and border closures.

But the brutal ‘Zero Covid’ policy — which it only ditched nearly two years into the pandemic — is thought to have left its population with subpar immunity.

Around 95 per cent of Australians have been double-vaccinated and 70 per cent boosted, but barely anyone had been exposed to the virus until this year.

The draconian lockdown strategy is also thought to have weakened people’s immunity to seasonal illnesses, and has been blamed for the current flu outbreak.

Australia’s flu season, which typically runs from June to September, started unusually early this year and caused infections to spike up to 10 times higher than the pre-pandemic level in weeks.

The new Labor Government has resisted calls for social restrictions to be reintroduced but has recommended people wear masks indoors and businesses allow employees to work from home if they can.

There were 5,450 patients in hospital with Covid on Monday, official figures show, eclipsing the previous record of 5,390 during the first Omicron wave in January

Dr Leana Wen, a public health policy professor at George Washington University in the US, told WebMD Australia was in the midst of a ‘twindemic’ caused by a lack of natural exposure to Covid and influenza earlier in the pandemic.

Australia is recording around 30,000 Covid infections per day and daily deaths topped 100 last week for only the second time in the pandemic.

While BA.4 and BA.5 — which are also behind a fresh Covid surge in the UK — are milder than previous strains, they are wreaking havoc on Australia’s care homes.

More than 1,000 social care facilities have suffered outbreaks during the latest wave, putting the elderly and most vulnerable at risk.

Many frontline workers in care homes and hospitals are also sick or in isolation because of high infection rates, piling more pressure on services.

Nearly 2,000 Australian army troops have been ordered to remain in care homes to ease staff shortages.

Australians who cannot make a living because they are isolating due to Covid are entitled to a $750 (£430) payment. 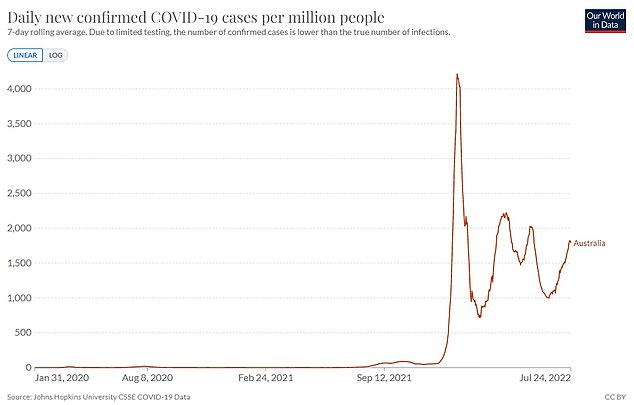 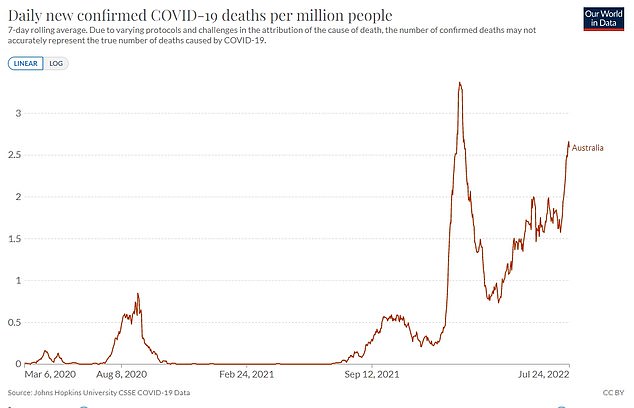 Australia is recording around 30,000 Covid infections per day and daily deaths topped 100 last week for only the second time in the pandemic

Weekly virus fatalities hit 162 in the seven days ending July 23, compared to 115 in the worst week of the previous flare-up in March, according to Health Ministry data.

It means the country’s current mortality rate is twice as high as the UK’s and four times higher than the US.

Data from Oxford University-backed research platform Our World in Data shows four people per million in New Zealand are dying with Covid every day.

For comparison, in the darkest days of the pandemic, similar rates in the UK and US sat closer to 19 and 10, respectively.

However, both countries are now logging much lower death counts.

The UK is recording two deaths per million people each day, despite up to one in 15 people being infected.

Meanwhile, the US is suffering just one Covid fatality for every million people, a quarter of the scale seen in New Zealand.

Professor Paul Hunter, an infectious disease expert based at the University of East Anglia, told MailOnline last week that New Zealand has ‘done better than most countries that initially followed zero-Covid strategies’ because this approach meant many people had good protection against severe illness and death when restrictions were lifted.

But he noted that hybrid immunity — being both vaccinated and having a previous infection — seems to provide the best protection against severe disease and death.

Until this month a rather larger proportion of people in New Zealand had had just two shots and no prior infection, compared to the UK where the vast majority are thought to have had Covid, Professor Hunter said.

He added: ‘I suspect that is contributing to the current death rate in New Zealand as being over twice that of the UK.

‘In the first New Zealand wave, vaccine protection was still good but has now waned enough to increase fatality rates in the absence of the great majority of people having already recovered from Covid.’

Professor Robert Dingwall, a sociologist at Nottingham Trent University and former Government adviser, told MailOnline that experts have long said that it would be fairer to judge countries’ responses two years on from the original outbreak.

He said: ‘New Zealand was able to prevent early waves of infection by rigid border controls while other countries developed and tested vaccines.

‘However, in the end, the country has been unable to escape the fundamentals of Covid — that the risk of death is strongly related to age, that vaccination mitigates but does not prevent infection, and that the way out of the pandemic lies through population immunity acquired by both vaccination and infection.’

England’s Covid outbreak is slowing down, according to official data.

Analysts behind the country’s most trusted surveillance project, ran by the Office for National Statistics, estimate 3.14million people were infected on July 13 — up only 9 per cent on the previous week’s estimate. For comparison, the surge logged last Friday was roughly a third.

Cautious statisticians said it’s ‘too early to say’ if the wave is peaking.

But public health experts claimed the worst is likely over, given that the mass-testing survey is ‘always two or three weeks behind the epidemic curve’.

Despite the positive signs, some scientists have urged ministers to reintroduce mask mandates and working from home rules.

Others have even raised the prospect of limits on social gatherings, similar to harsh policies adopted during the darkest spell of the pandemic.