Britain may have to endure coronavirus restrictions next Christmas because coronavirus ‘benefits’ from cooler months, Chris Whitty has suggested

Britain may have to endure coronavirus restrictions next Christmas because coronavirus ‘benefits’ from cooler months, Chris Whitty has suggested.

Offical for National Statistics figures show an estimated 1.1 million people in private households in England had Covid-19 between December 27 and January 2 – equivalent to around 2.06% of the population.

Professor Whitty, England’s chief medical officer, said it was ‘really quite a large number indeed’, warning people to take the government’s stay at home message seriously, owing to the new variant as well as winter.

He said the risk level will gradually decrease over time with measures being ‘lifted by degrees, possibly at different rates in different parts of the country, we’ll have to see’.

‘We’ll then get over time to a point where people say this level of risk is something society is prepared to tolerate and lift right down to almost no restrictions at all,’ he added.

‘We might have to bring in a few in the next winter for example, that’s possible, because winter will benefit the virus.’

He also said it was important to follow the recommendations on vaccine ordering by the Joint Committee on Vaccination and Immunisation, despite pressure for teachers to be given greater priority.

‘The reason for that is that that ordering means that we will have the maximum impact on the disease because the people that are by far the highest risk of dying will be vaccinated first,’ he explained. 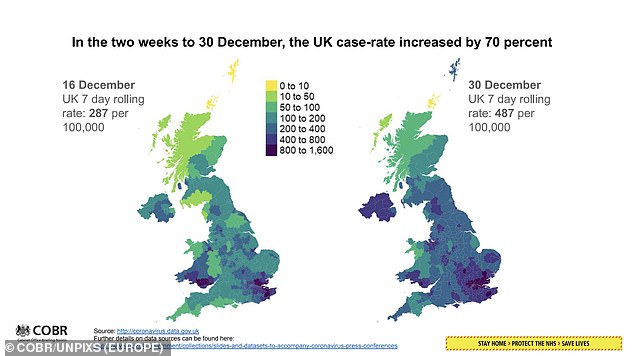 Offical for National Statistics figures show an estimated 1.1 million people in private households in England had Covid-19 between December 27 and January 2 – equivalent to around 2.06% of the population

He made the comments as Boris Johnson said he had ‘no choice’ but to plunge England into a third national lockdown, with new figures suggested one in 50 people had coronavirus last week.

The Prime Minister vowed to use ‘every second’ under the stringent restrictions to put an ‘invisible shield’ around the elderly and vulnerable through a mass vaccination programme.

He said that, so far, more than 1.3 million people have been vaccinated against Covid-19 across the UK, including 23% of all the over 80s in England.

Mr Johnson, speaking at a Downing Street press conference the day after announcing new national controls, said: ‘I believe that when everybody looks at the position, people understand overwhelmingly that we have no choice.

‘When the Office of National Statistics (ONS) is telling us that more than 2% of the population is now infected – that’s over one million people in England.

‘And when today we have reported another 60,000 new cases, and when the number of patients in hospitals in England is now 40% higher than at the first peak in April.

‘I think obviously everybody – you all – want to be sure that we in Government are now using every second of this lockdown to put that invisible shield around the elderly and the vulnerable in the form of vaccination and so to begin to bring this crisis to an end.’ 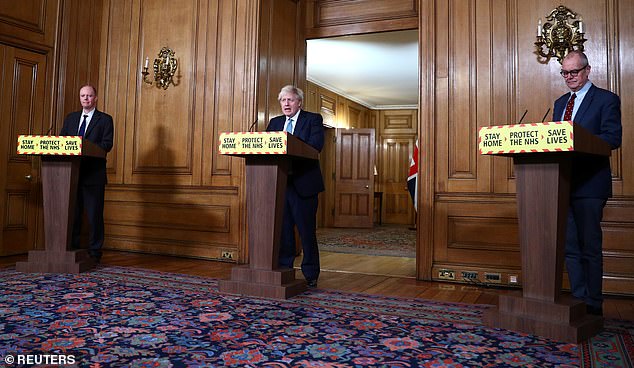 Chief scientific adviser Sir Patrick Vallance said it was possible the South African coronavirus variant may have some impact on vaccine effectiveness but is unlikely to ‘abolish’ their effect.

He told the press conference that a possible change in the virus shape in the variant ‘theoretically gives it a bit more risk of not being recognised’ by the immune system.

Sir Patrick said there was ‘nothing yet to suggest that’s the case’ and that ‘the most likely thing is that this wouldn’t abolish vaccine effect’ though it ‘may have some overall effect on efficacy but we don’t know’.

Mr Johnson announced stringent new controls in a televised address on Monday – including closing schools to most pupils – in an attempt to prevent the NHS being overwhelmed by a surge in new infections.

The Prime Minister also raised the prospect that the vaccination programme being rolled out across the country could enable restrictions to be progressively eased from mid-February.

Elsewhere in the UK, First Minister Nicola Sturgeon imposed a lockdown on Scotland for the rest of January, with a legal requirement to stay at home and schools closed to most pupils until February.

Schools and colleges in Wales will also remain closed until at least January 18 and move to online learning, while in Northern Ireland – which is already under a six-week lockdown – ‘stay at home’ restrictions will be brought back into law and a period of remote learning for schoolchildren will be extended.

The Stormont Executive is meeting on Tuesday to confirm details of the plan, which could run beyond January.