Covid deaths in the second wave were up to five times higher in Bangladeshi Brits than white adults in England, official data revealed today.

But the trend has changed between the first and second waves, according to the Government’s statistical body.

The ONS analysis — which goes up until the end of March — crunched the data of every coronavirus victim aged 30-100 listed on the 2011 census.

It showed black Africans were 3.7 times more likely to die than white people in the first wave, up to September 11. That dropped to 1.62 in the second wave, considered as starting the day after.

For comparison, the risk among Bangladeshi Brits went from three to 4.96.

The ONS offered no explanation as to why coronavirus deaths were higher in BAME people, or why the second wave hit certain communities harder.

Scientists investigating the topic have repeatedly claimed a number of factors are behind the link, including ethnic minorities being more likely to be key workers who come into contact with more people.

Other included living in crowded housing, where transmission is more likely, as well as having underlying conditions that raise the risk of getting seriously ill.

Factors such as location, employment and conditions explain a large proportion of the excess Covid mortality risk observed in some ethnic groups.

But they don’t explain all the risk, with ‘further work’ needed to ‘increase knowledge and understanding of the possible mechanisms underlying this unexplained risk’, the ONS said.

Covid deaths in the second wave were up to five times higher in Bangladeshi Brits than white adults in England, official data has shown 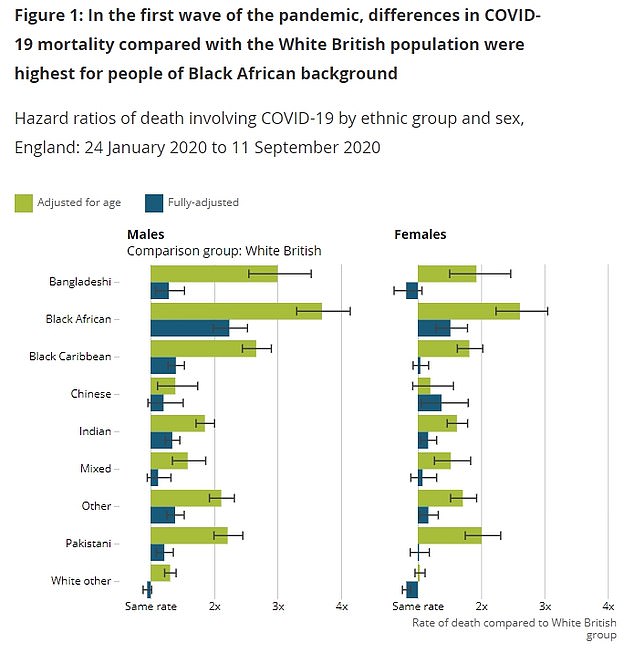 WHO WAS MOST AT RISK OF DYING FROM COVID IN THE SECOND WAVE?

All compared to white British

During the first wave of the pandemic males from all ethnic minority groups were at increased risk of death involving Covid compared with white men, the ONS said.

Women from all ethnic minority groups other than Chinese and ‘white other’ were also at greater risk.

The figures, which were adjusted for age, suggest mortality rates for black African men were 3.7 times greater than for white British males during the first wave.

This dropped to 2.2 times greater in the second wave.

For black Caribbean men, the risk fell from 2.7 times to 1.7 times greater.

Mortality rates in Bangladeshi men rose from being 3.0 times greater than white British men in the first wave to 5.0 in the second wave, and for Pakistani men it increased from 2.2 times to 3.4 times greater.

Among black Caribbean women the risk fell from 1.8 times to 1.4 times greater.

For Bangladeshi women, rates rose from being 1.9 times greater than white British females in the first wave to 4.1 in the second wave, and for Pakistani women it rose from 2.0 times to 2.8 times greater.

Adjusting for other factors such as occupation, living arrangements and pre-existing health conditions accounted for a large proportion of the excess Covid-19 mortality risk in some ethnic minority groups.

However, most black and south Asian groups remained at higher risk than white British people in the second wave, even after adjustments.

The ONS said its findings ‘demonstrate people from most ethnic minority groups have experienced greater rates of death involving Covid compared with people of white British background during the pandemic’.