England’s Covid infections have continued to fall to their lowest level in two months, a major testing survey revealed today.

Office for National Statistics (ONS) analysts estimate around 1.2million had the virus on any given day in the week ending August 16. Cases were down 15 per cent on the previous week.

Infections also fell in Scotland, Wales and Northern Ireland, while also dropping in every age group and region in England.

Statisticians said cases ‘continue to head in the right direction’, with the lowest levels seen in school-age children, who are on their summer holidays.

It comes after MailOnline yesterday revealed more than a third of over-50s have still not had their first Covid booster jab in parts of England.

The age group will be eligible for another top-up jab this autumn as part of NHS preparations ahead of what is expected to be a dire winter, with the roll-out set to kick off in the next fortnight.

And the World Health Organization today confirmed countries across the world have hit the ‘tragic milestone’ of one million Covid deaths in 2022.

Office for National Statistics (ONS) analysts estimate around 1.2million had the virus on any given day in England in the week ending August 16. Cases were down 15 per cent on the previous week 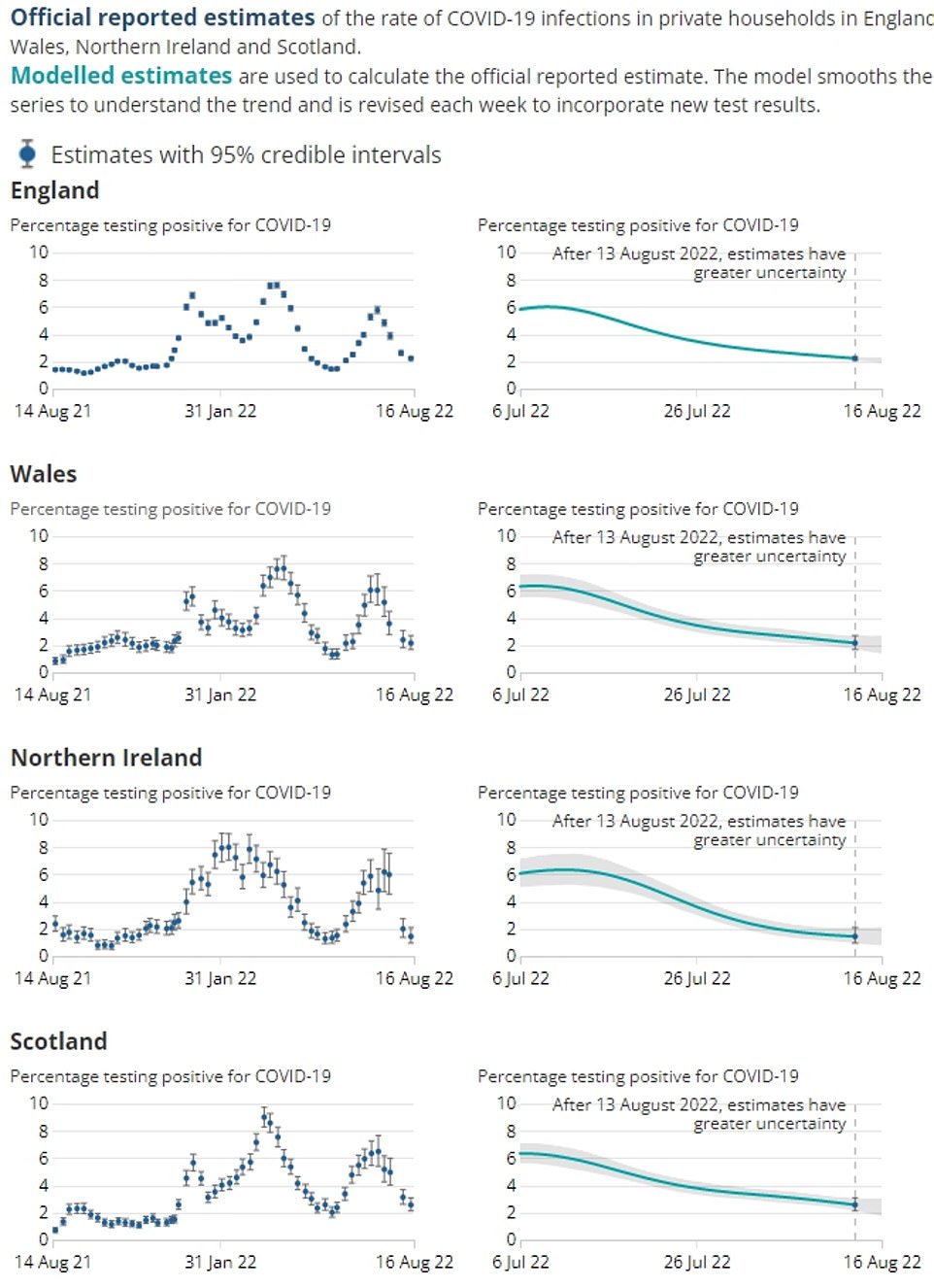 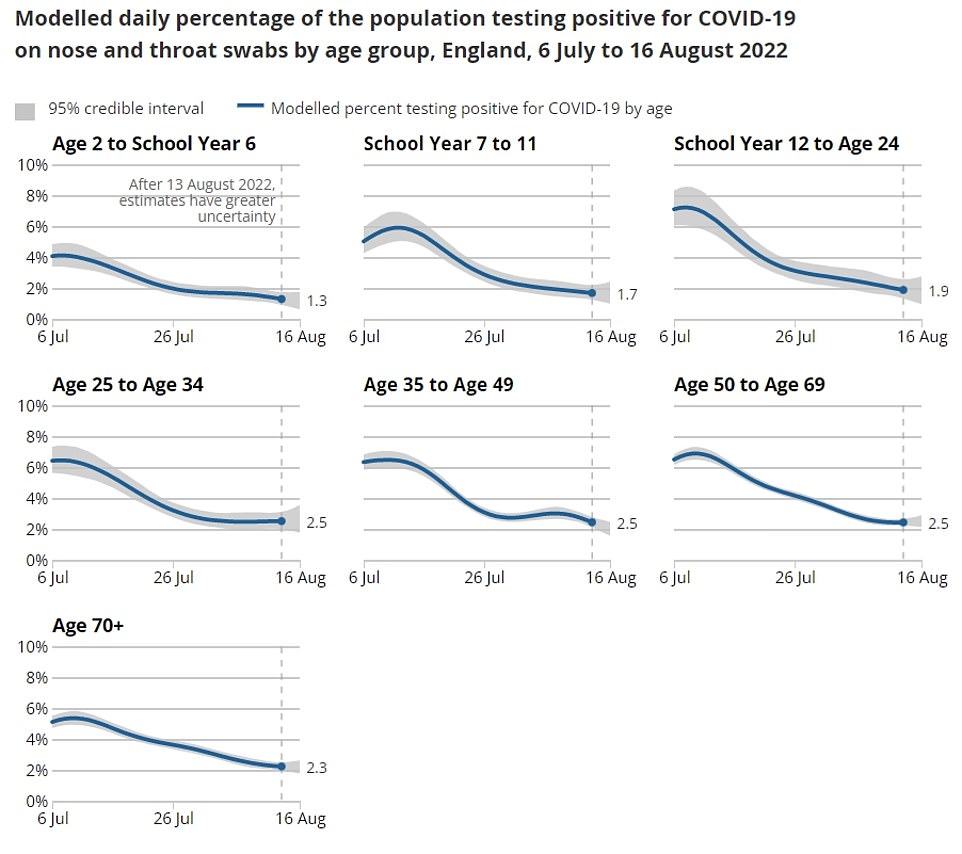 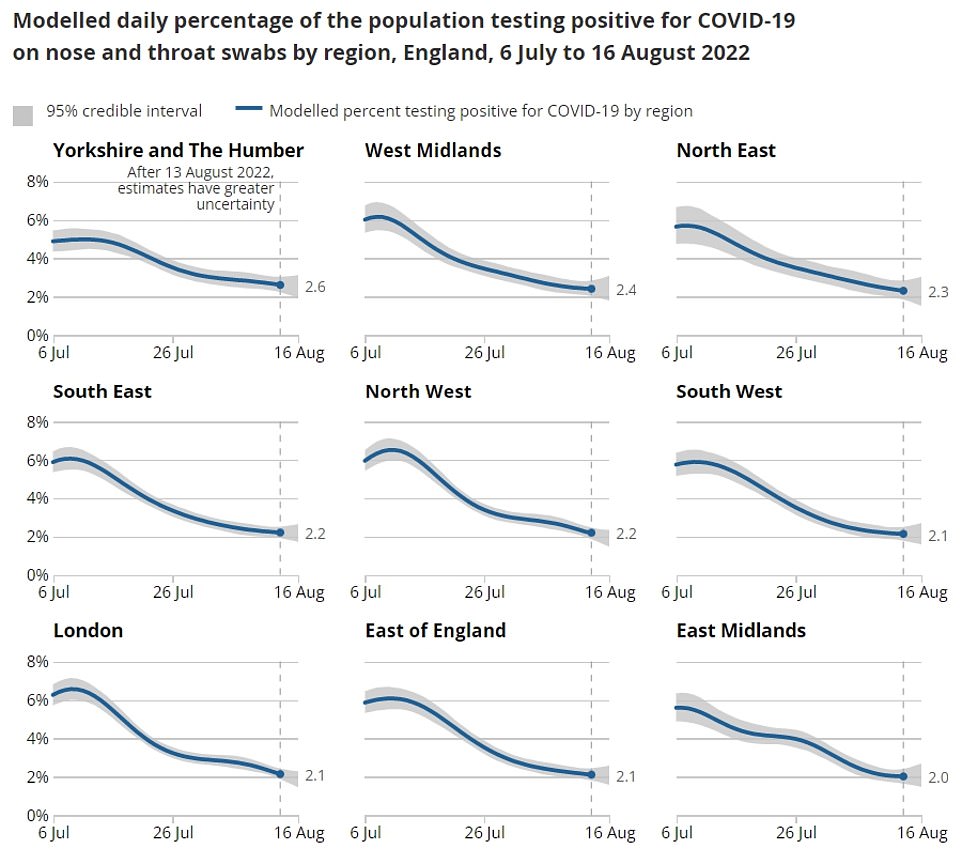 Why Covid is not over, even if worst of pandemic is: 2022 hits ‘tragic milestone’ of 1million deaths

The world has hit the ‘tragic milestone’ of one million Covid deaths in 2022, the World Health Organization confirmed today.

Nearly 6.45million deaths have been reported to the WHO since the virus was first detected in China in late 2019.

Dr Tedros Adhanom Ghebreyesus, head of the UN agency, said the world could not claim that it is ‘learning to live with Covid’ when the virus death rate is still high — despite having ‘all the tools’ needed to prevent deaths.

Vaccine industry experts said ‘a very real human tragedy’ was behind every death and urged people not to ‘become numb’ to the toll of the pandemic on people, families and communities

The WHO called on nations to take action to impose ‘proportionate’ Covid curbs to limit transmission, continue to offer tests and sequence positive samples, rollout access to life-saving drugs and boost vaccination drives.

Countries worldwide continue to dish out Covid jabs and have launched booster campaigns ahead of an expected surge later this year. And scientists remain on the lookout for mutations in the virus through surveillance schemes.

But most countries have eased or lifted restrictions such as mask-wearing and social distancing and limited access to tests due to the success of vaccination campaigns and the emergence of the milder Omicron strain.

Global cases are currently a fifth of the Omicron winter peak, although the figure has been impacted by a reduction in testing. However, UK surveillance data today showed that infections have are in decline.

The ONS data today showed cases in Scotland fell 18 per cent in a fortnight, the latest figure show, from 164,100 to 135,000. It means around one in 40 people were infected in the most recent week.

Sarah Crofts, head of analytical outputs for the Covid-19 Infection Survey, said: ‘Infections continue to head in the right direction across all of the UK and are now at levels similar to those last seen in mid-June.

‘Rates remain lowest in school-aged children and we will closely monitor the data to see how the return of schools in September may affect this.’

It comes after MailOnline revealed only two-thirds of over-50s have had their first Covid booster jab in some parts of England.

Our analysis shows all ten boroughs with the lowest uptake are located in the capital, with Newham in East London faring the worst (58 per cent).

Across England, roughly 3.7million over-50s — the equivalent of 16 per cent — are yet to take up last year’s offer to get their first booster vaccine.

This is despite them being considered to be most at risk of becoming seriously ill with the virus, with health chiefs putting their age group first in line when extra doses were first rolled out.

Officials are aiming to boost the immunity of 26million Britons through the latest stage of the historic vaccination campaign, with the goal of preventing any spike in Covid hospital admissions striking alongside standard seasonal pressures.

It means, by Christmas, some of the country’s most vulnerable people will have already had six doses.

The original Covid boosters, launched to shore up Britain’s defences ahead of last winter, were officially offered to everyone over the age of 50 in mid-September.

They were dished out by order of risk, with people in older groups and those with specific health conditions that made them particularly vulnerable offered them first.

But NHS England data suggest a significant portion of this group still haven’t had a third jab nearly 12 months on.

According to the latest statistics, an estimated 216,000 over-80s are yet to receive their original booster, about a tenth of this segment of the population.

Some over-50s who have not got their third booster are ineligible due to only having one jab, or even none at all.

Health bosses are keen to get as many older Brits topped up with boosters as possible because, as a general rule, the older the individual the more likely they are to suffer a serious Covid infection if infected.

Vaccination rates for Covid boosters were highest in Hambleton in Rutland, Hart in Hampshire and Tewkesbury in Gloucestershire, which all had 93 per cent of their over 50s jabbed with three doses.

Areas of low uptake were mainly centred around London, with most parts of the capital only having vaccination rates around 60 per cent.

After Newham comes Westminster (59 per cent). Other English areas of low uptake, where vaccination rates are in the 60 to 65 per cent region, include Hackney, Barking and Dagenham, Hammersmith and Fulham, Haringey, Kensington and Chelsea, Lambeth and Lewisham.

In total, 19.4million people over the age of 50 have already got a third Covid jab out of an estimated population of 23.1million, according to the NHS National Immunisation Management Service (NIMS) data. 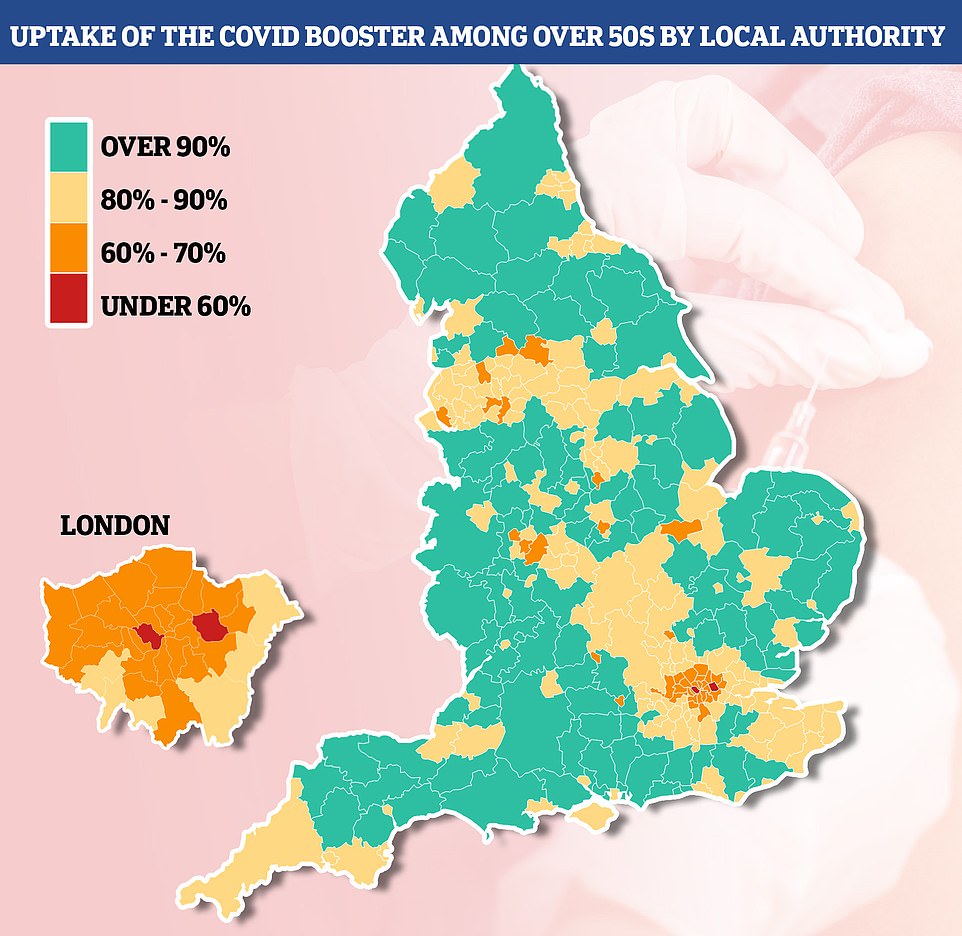 London is the capitol of vaccine sceptic older Britons, data from NHS England suggests, with the city having the most areas where take-up of a third Covid jab was below 80 per cent 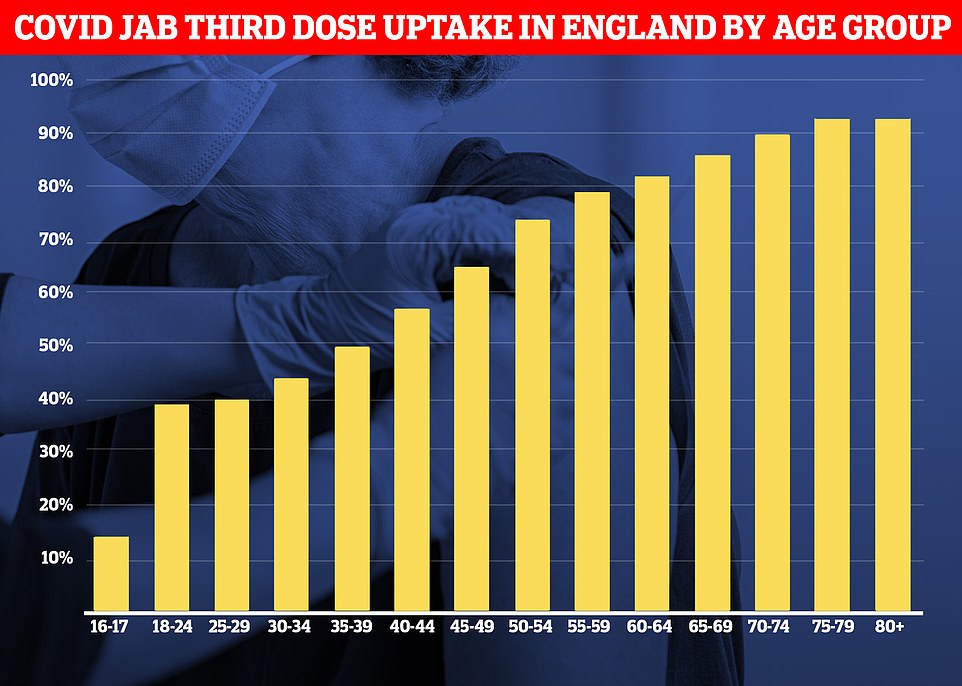 The older you are the more likely to get a third Covid jab. This graph show the percentage of each segment of the estimated population in England  who have opted to get a booster does of the the vaccine 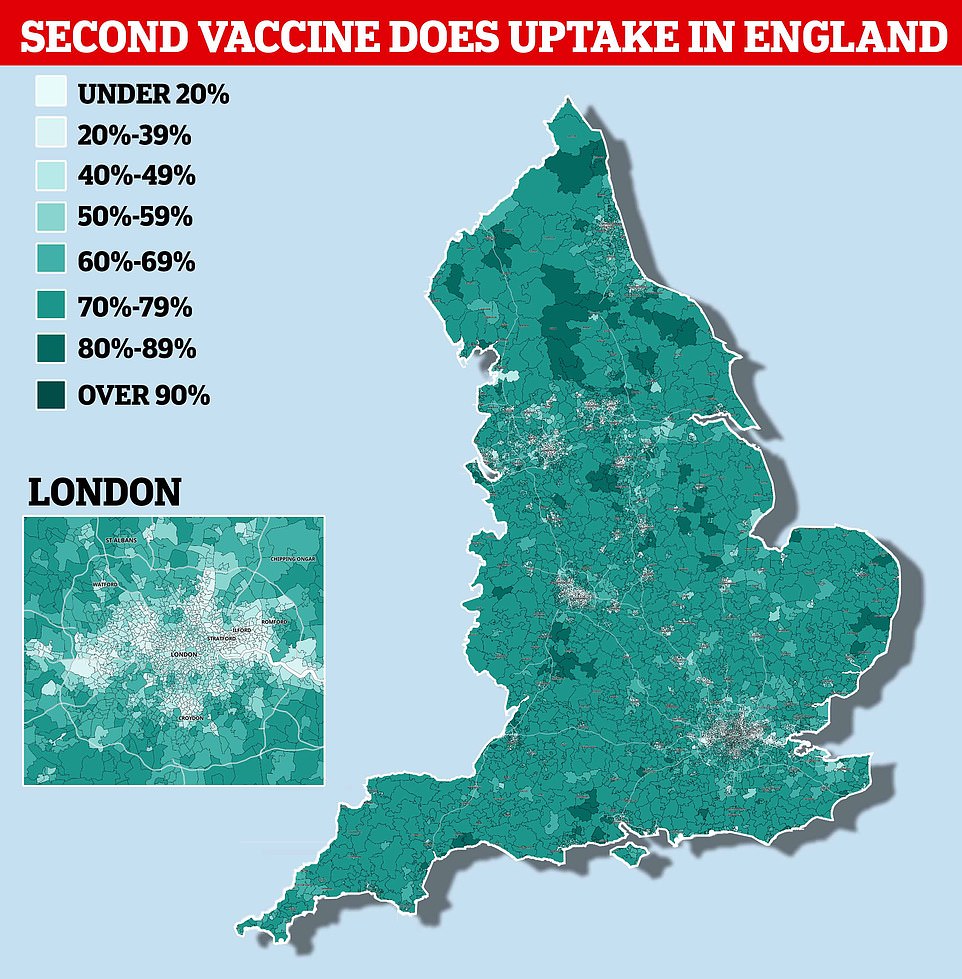 Some parts of England are even struggling to convince people to get even a second Covid jab with only three out of five people in London and the surrounds of Oxford, Cambridge and Blackpool opting to get two doses of the vaccines