Coronavirus cases are continuing to flatten across the country as the U.S. approaches the end of the fourth wave of the pandemic.

However, during the same time last month, new infections had spiked by 212 percent over a four-week period.

This means that although the overall number of cases has risen from mid-August, the growth rate has significantly slowed to the lowest since early summer.

Nearly half of U.S. states have seen Covid infections either decline or hold steady over the last two weeks, a DailyMail.com analysis of data from Johns Hopkins University shows.

What’s more, hospitalizations have also declined from 101,634 last week to 93,703, a seven percent drop, according to the U.S. Department of Health and Human Services (HHS).

However, deaths have risen with 3,393 virus-related fatalities recorded on Thursday and a seven-day rolling average of 1,993.

This is a 133 percent increase from the 852 average deaths recorded one month ago and the highest average reported since February.

Despite most hotspots including Arkansas, Florida, Louisiana and Mississippi now reporting declines, a few states are still experiencing surges – including Montana, Tennessee and West Virginia – driven by low vaccination rates. 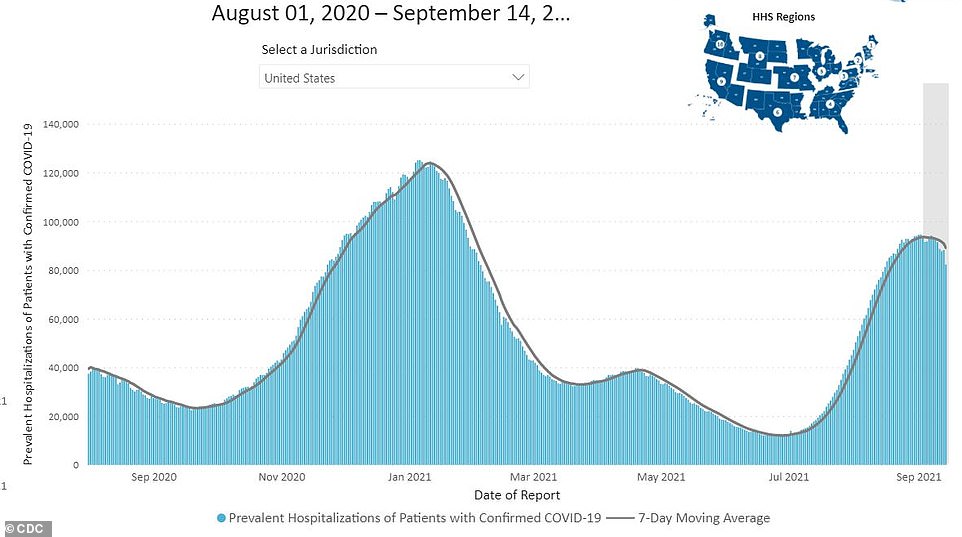 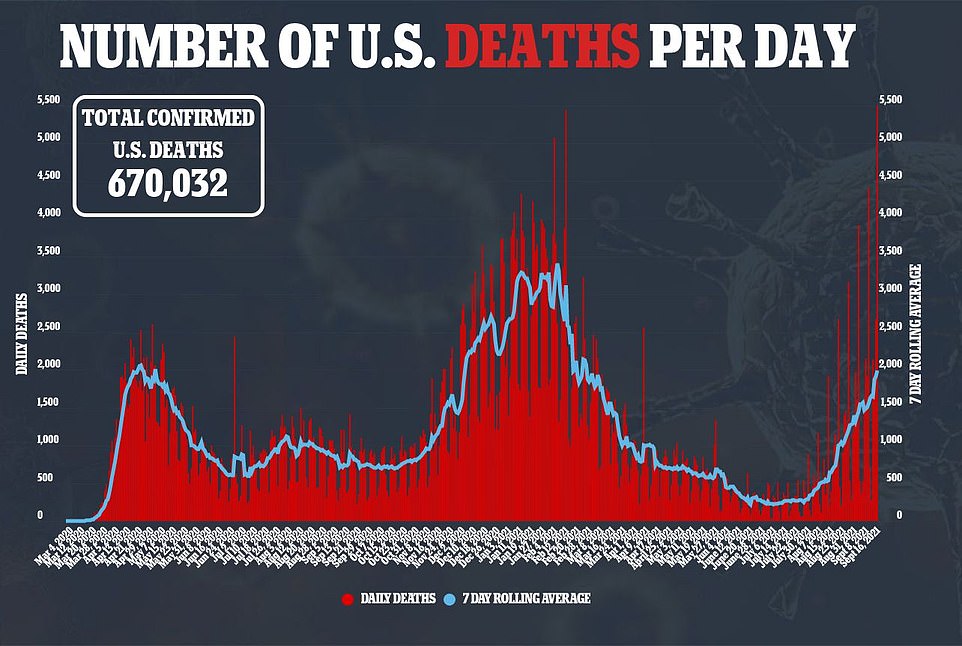 Deaths are continuing to rise with 3,393 virus-related fatalities recorded on Thursday and a seven-day rolling average of 1,993, is a 133% increase from one month ago and the highest average since February, but deaths are expected to decline soon as well

Public health experts and doctors say that the decline is likely due to the fact that country has a high level of hybrid immunity with 180.1 million Americans fully vaccinated and an estimated 120.2 million true infections – although there is high probability of some crossover.

‘It could represent that we have reached a peak and we are now on the way down.’

America has seen various peaks and valleys when it comes to daily average COVID-19 cases since the start of the pandemic.

Average cases reach nearly 32,000 in early April 2020 before declining. Infections rose once again over the summer and peak at 66,800 in July 2020 before dropping.

The deadly third wave then took hold in the fall and the country saw its highest number of average cases ever recorded at 247,500 in mid-January. Cases declined once again until late June, when the Delta variant became the dominant strain.

‘Every epidemic goes through cycles and eventually wanes, and that happens when you have enough people who are resistant,’ Casadevall said.

But Casadevall warned to not declare victory too soon and to keep following mitigation measures – and the unvaccinated Americans continue to get shots.

‘I would just be careful declaring anything except some degree of optimism with the fact that the numbers are going down,’ he told CNBC.

Despite the overall good picture for the country, some states are still continuing to experience surges due to few restrictions and low vaccination coverage.

In Tennessee, average daily Covid cases currently sit at 10,664, a 129 percent increase of 4,648 average cases over the last month, according to Johns Hopkins data.

The Volunteer State is currently record the highest number of infections per capita with a seven-day average of 760.6 cases per 100,000 people, CDC figures show.

‘There’s really not extra staff to bring in from outside the community. There are limits to what we can do.’ 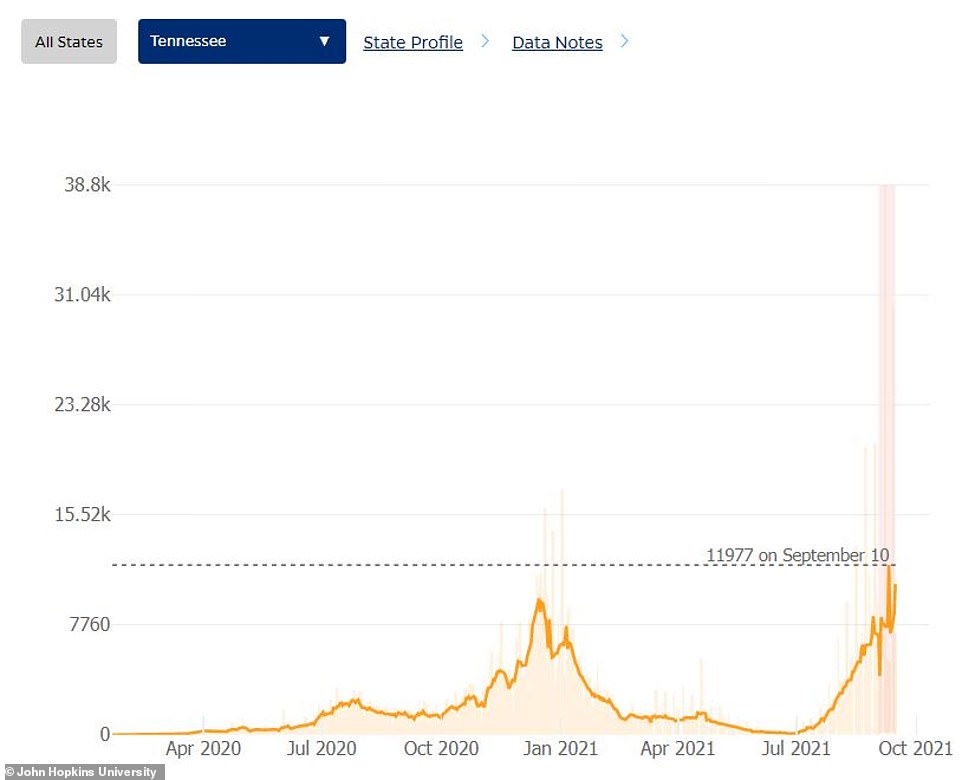 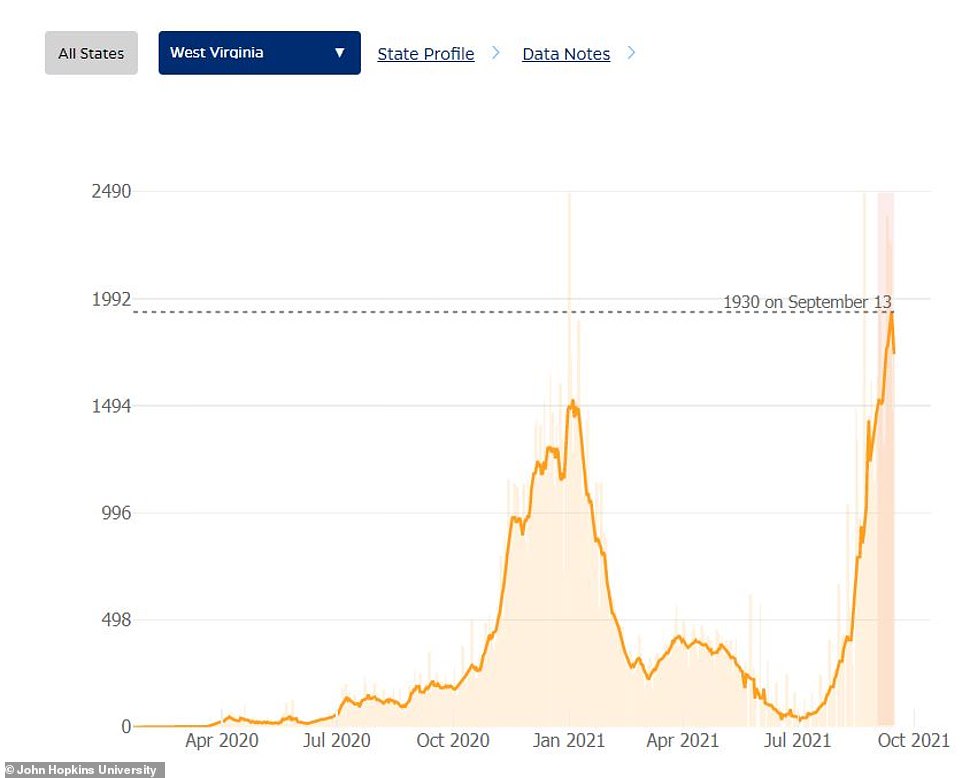 Average cases in West Virginia, which has the lowest vaccination rate in the country, have risen 173% over the last month from 634 per day to 1,734 per day 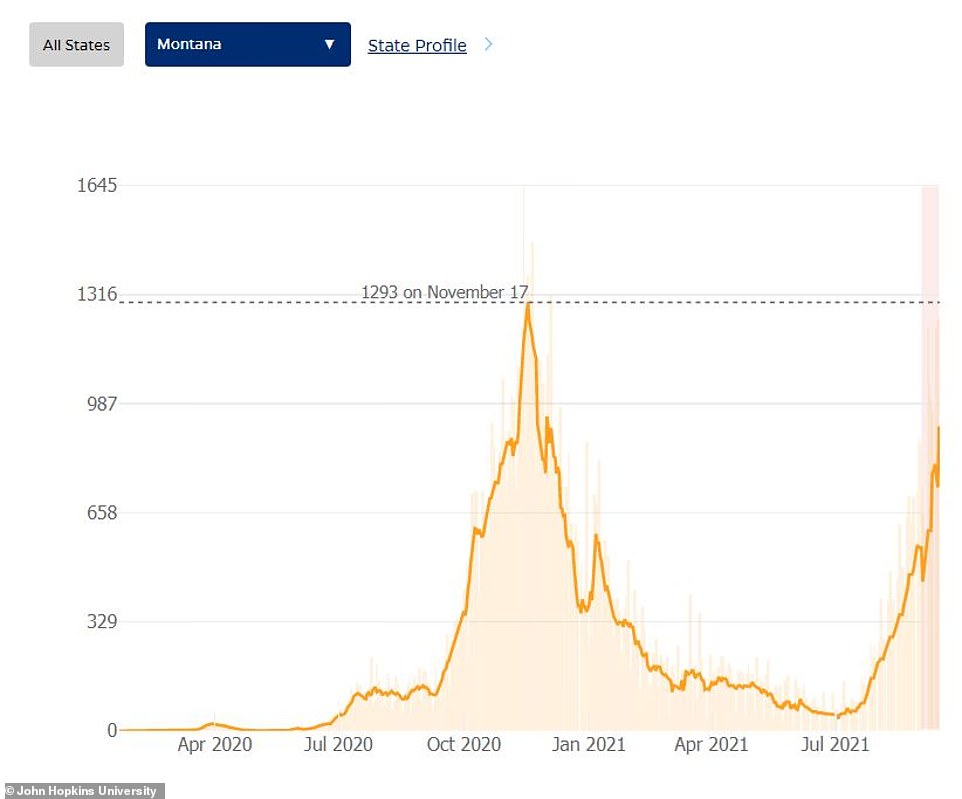 Cases are also rising in Montana with average infections per day sitting at 918, a 185% increase from 322

‘Truth is that if you get the vaccine you very likely won’t come to the hospital.’

In nearby West Virginia, average infections have risen by 173 percent over the last month from 634 per day to 1,734 per day, according to Johns Hopkins.

The state has the second-highest rate of cases per capital at 743.5 per 100,000 over a seven-day average, CDC data show.

At a press briefing on Wednesday, Gov Jim Justice reported that West Virginia set a new record number of COVID-19 at 893 patients as well as a record number of those in intensive care units (ICUs) at 275 patients.

‘We know that, for the most part, we’re dealing with a disease that is attacking the unvaccinated,’ he said.

‘If you’re still unvaccinated, you need to make a great decision right now and get yourself vaccinated.’ 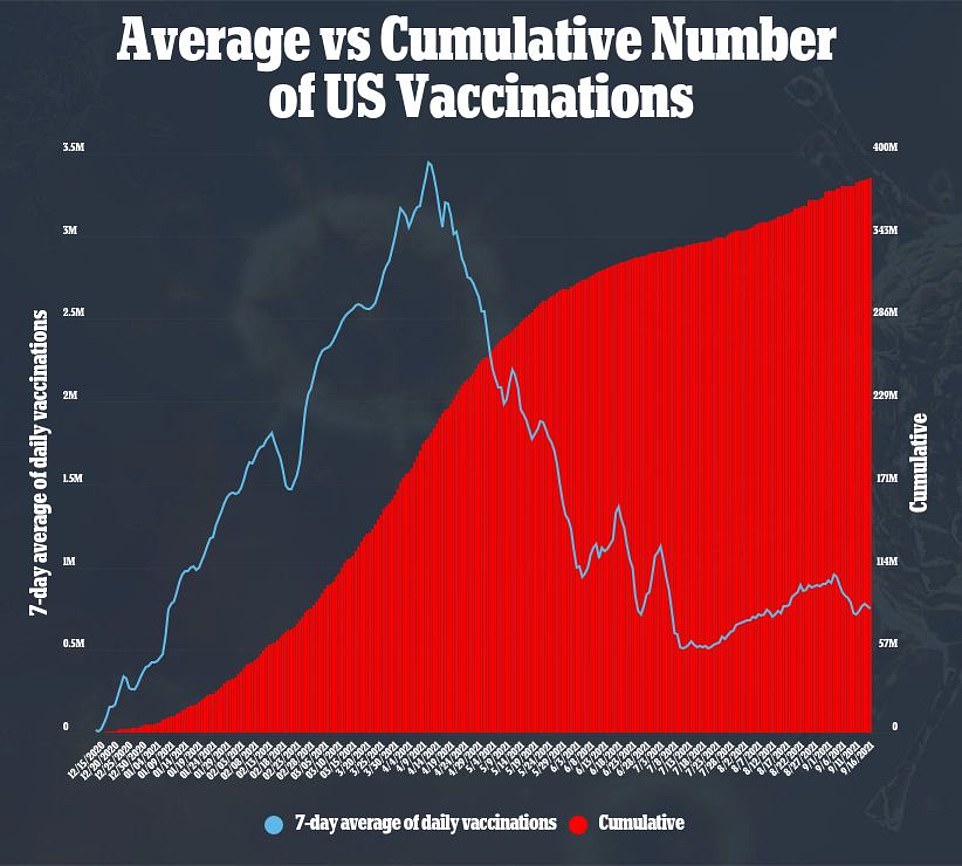 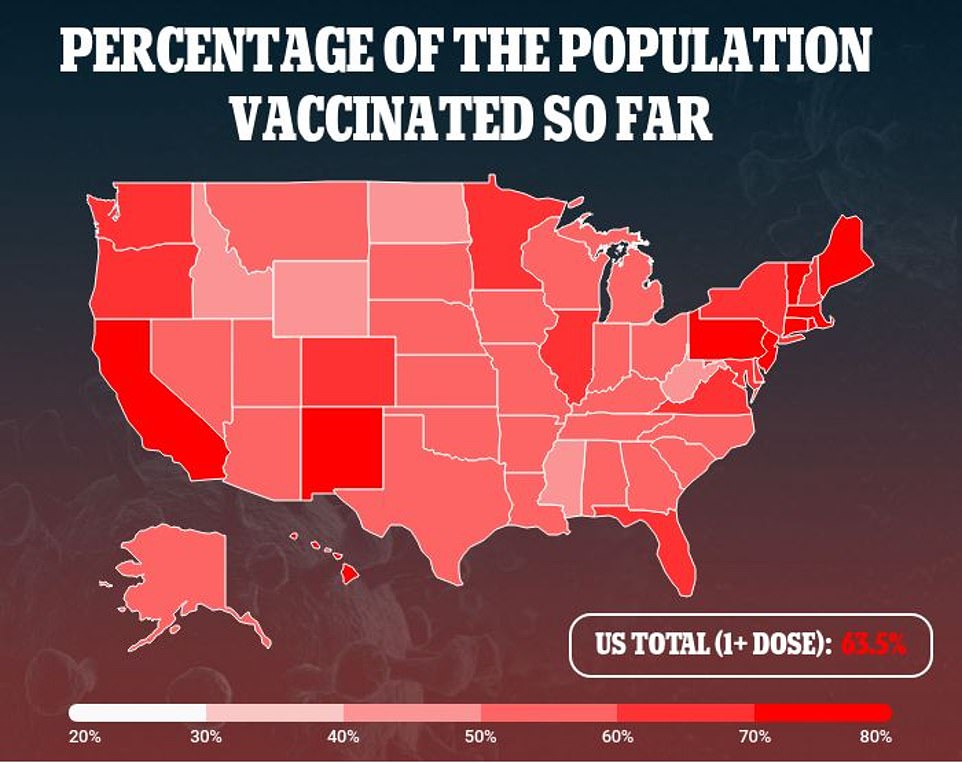 The Mountain State currently has the worst Covid vaccination rate in the country with just 40 percent of the total population fully vaccinated.

‘You can see, there’s no getting away from it. It’s all around everywhere,’ Justice said. ‘The only way you’re really going to stand a great chance to get away from it is to be vaccinated.’

Cases are also rising in Montana with average infections per day sitting at 918, a 185 percent increase from 322.

Montana has a high level of transmission with about 527.4 cases per 100,000 people, but only 47.5 percent of residents are fully vaccinated.

According to Dr Nathan Allen, a ER physician at Billings Clinic, 90 percent of patients being admitted to hospitals with Covid are unvaccinated, reported MTPR.

The hospital says it is considering implementing ‘crisis standards of care’ to deal with the recent surge of patients as seen in the northwestern part of the state.

This protocol allows hospitals to prioritize patients who are more likely to survive while providing less care for others.

‘It is still surreal to see a tragedy like this unfolding before you that you hoped would never happen to your community, Allen told MTPR. 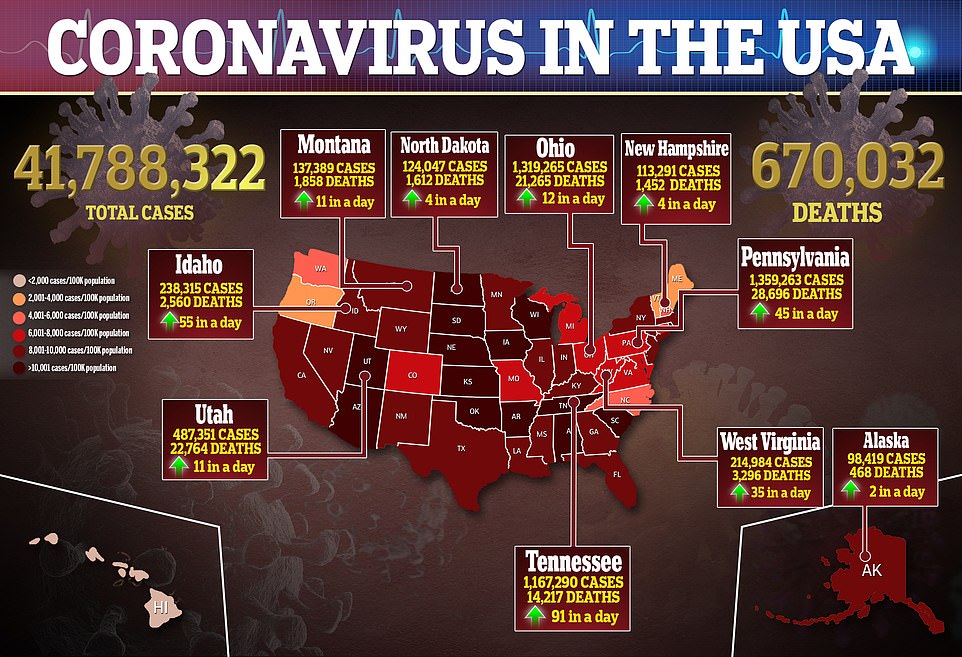