Criminals including paedophiles and drug dealers are being handed a ‘Covid bonus’ of shorter sentences or avoiding jail entirely because coronavirus has led to difficult conditions in prisons.

Since April, judges have been handing down shorter sentences after the Court of Appeal ruled that the impact of measures including prolonged cell confinement and restrictions on visitors to combat coronavirus could be taken into account when sentencing a man who had sexually abused a schoolgirl.

According to The Times, criminals – including Romanian burglars and a criminal with 27 previous convictions – have had their sentences routinely reduced since then.

It has also emerged that burglars who have been released from jail are to be fitted with GPS tags so they can be tracked 24 hours a day, according to policing minister Kit Malthouse.

He said the law would be changed through what is known as a statutory instrument to allow probation officers and police to force criminals to wear tags as a condition of them being freed on licence.

But there have many examples of other criminals who have received lesser sentences.

In April, Paul reed, 30, who had 27 previous convictions to his name, received a lesser sentence for assaulting a former partner.

And last month, two burglars who wore balaclavas when terrorising a family at their home in Teeside were given shorter sentences which acknowledged that they were having to spend 23 hours a day in a cell because of Covid-19.

In July, a sex offender who had tried to groom an underage girl was jailed for only 20 months because of the prison regime caused by Covid-19 and the fact he had pleaded guilty.

In July a sex offender who was caught online trying to groom an under-age girl was jailed for 20 months, a reduction because of the Covid-19 prison regime and his guilty plea.

Victims’ commissioner Dame Vera Baird told The Times that there is a ‘real danger that Covid expediency is taking precedence over real justice.’

And Conservative MP Tim Loughton, a member of the home affairs select committee, said criminals were enjoying a ‘special summer sale’ and a ‘Covid bonus’ which sent out the wrong message.

The examples come after the Court of Appeal said that coronavirus’s impact on prison conditions was a valid factor for judges to consider when sentencing.

The pandemic has put the already creaking prison system under intense pressure.

In May, it emerged that prisoners with coronavirus symptoms were locked in cells for up to two weeks without being allowed out to shower.

A month earlier, it emerged that more than half of prisons in the UK were infected with coronavirus. 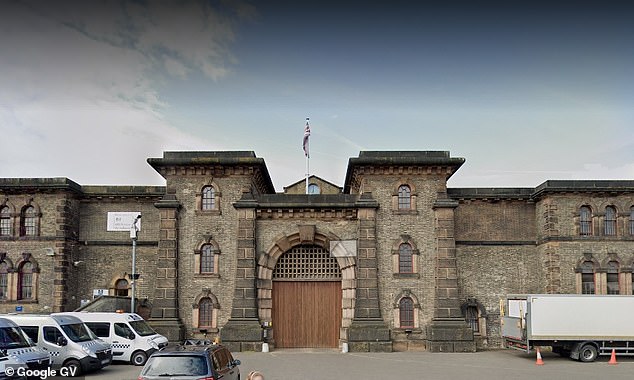 Since April, judges have been handing down shorter sentences after the Court of Appeal ruled that the impact of measures including prolonged cell confinement and restrictions on visitors to combat coronavirus could be taken into account when sentencing a man who had sexually abused a schoolgirl. Pictured: Wandsworth Prison

But in a move which could see released prisoners returned to jails, Mr Malthouse said he wanted all freed burglars to be forced to wear tags, The Telegraph reported.

This would mean police forces could monitor the movements of criminals whilst checking every burglary in their area to see if they may be suspects.

Refusal to wear the tag would breach the criminals’ licence, meaning they would be sent back to prison.

‘By adjusting the law – we can do it by statutory instrument – it will then allow us to put the tag on every burglar’s ankle for a period after their release on licence,

‘In simple terms, it can tell all police forces whether a former burglar has been in their area and they can match it up with burglary data.

‘Fifty per cent of burglaries are done by former burglars. It should be a major deterrent to them going out and plying their previous trade.’

Initially, the tagging will be trialled by six police forces, but Mr Malthouse wants it to end up a blanket policy for all burglars.

Figures from 2017 revealed that less than one in 20 burglaries are solved.